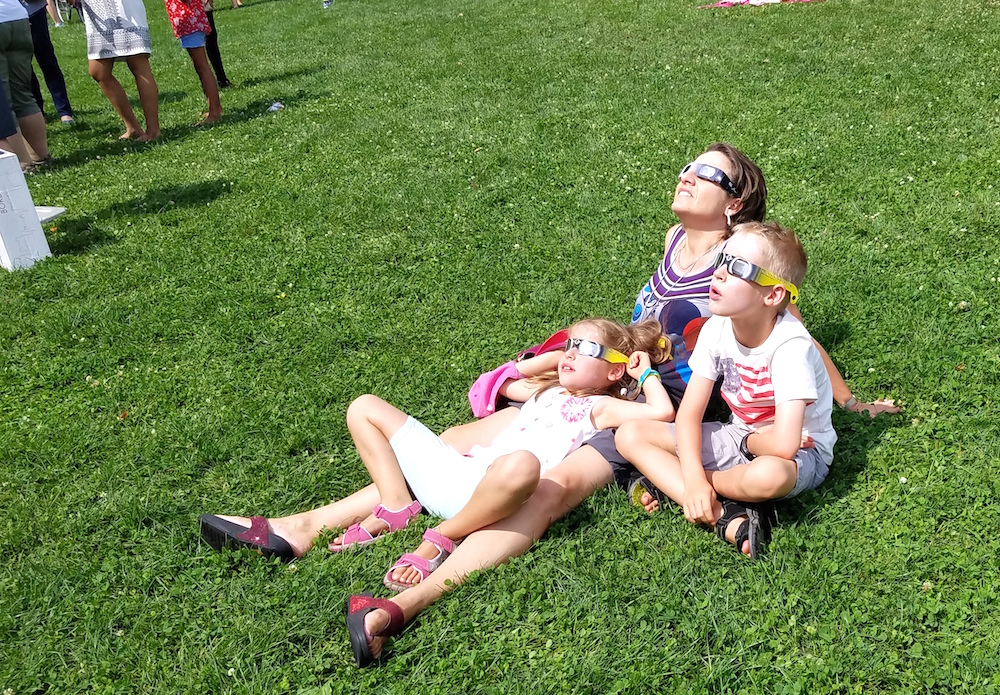 A family uses special glasses to look directly at the sun during the partial solar eclipse Monday afternoon. 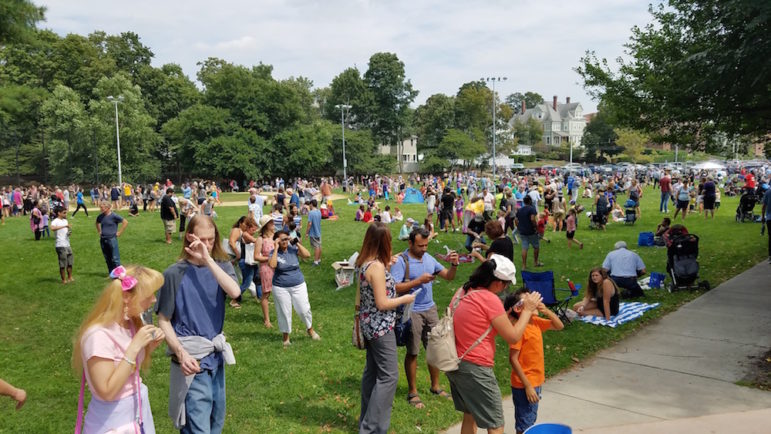 Hundreds turned up at Saltonstall Park Monday to be part of the solar eclipse watching party hosted by the Watertown Free Public Library.

The place to be in Watertown Monday afternoon was in the field behind Town Hall, which was swarming with people wanting to catch a glimpse of the eclipse of the sun – even if it was just partial in Massachusetts.

Hundreds of people showed up for the event at Saltonstall Park near Watertown Square. While not the 100,000 that showed up in Madras, Oregon for the total eclipse, Watertown’s event had a buzz of excitement.

The Watertown Free Public Library handed out special dark glasses at Saltonstall Park that allow people to watch the eclipse without damaging their eyes, but they ran out a couple of hours before the eclipse reached its peak.

Some people brought their lawn chairs so they could relax as they watched the event, while children ran around on the field in between glimpses of the moon moving across the sun. 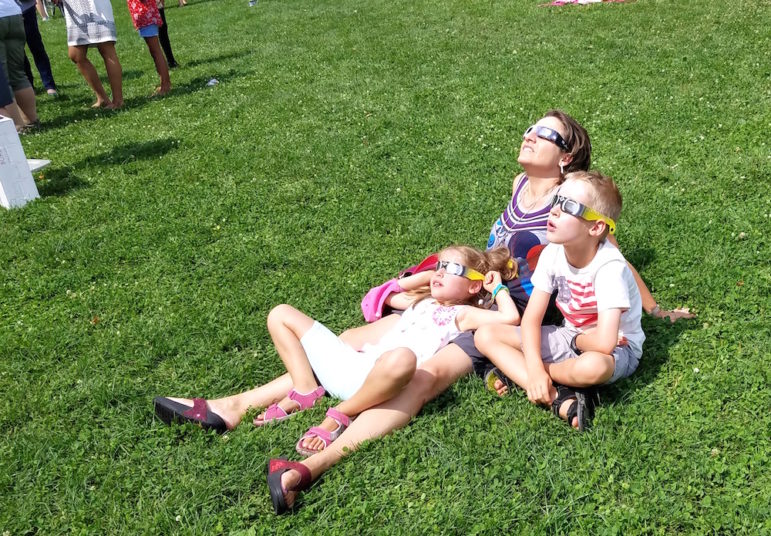 A family uses special glasses to look directly at the sun during the partial solar eclipse Monday afternoon.

Quite a few people came from out of town to watch the show.

“I thought it was fabulous,” said Gabe Frumkin who came over from Newton. “One thing I like about this event is that people are being nice and generous about sharing their glasses.”

The Watertown event made the Boston Globe’s list of places to view the eclipse. It was a convenient place for Nancy Horwitz of Newton to meet her friend Judy Sunblade of Cambridge.

“I thought it would be fun to be around other people and feel the energy,” Horwitz said.

Watertown’s Peter Barzdines got a pair during an event at the Watertown Library earlier this month. Peering through them he could watch the moon take a big chunk out of the sun, but there was still a fat crescent sun left.

“I think it will get to about two-thirds (covered),” Barzdines said.

The moon took the bottom part of the sun out.

“You can tell that somewhere down there it is totally covered,” Barzdines said, pointing southward.

On the East Coast, the path of total eclipse went through South Carolina, and on the West Coast it was in Oregon. The path of totality was about 70 miles wide.

While there was a full blockage of the sun in Watertown, the sun’s light did get dimmer and it felt a bit cooler when the moon had its maximum coverage, however, it also could have been due to cloud cover beginning to creep over town at the time.

If you missed this one, there will be another solar eclipse on April 8, 2024. The path of totality will not go through Massachusetts, but will be closer as it passed through Upstate New York and the northern parts of Vermont, New Hampshire and Maine.