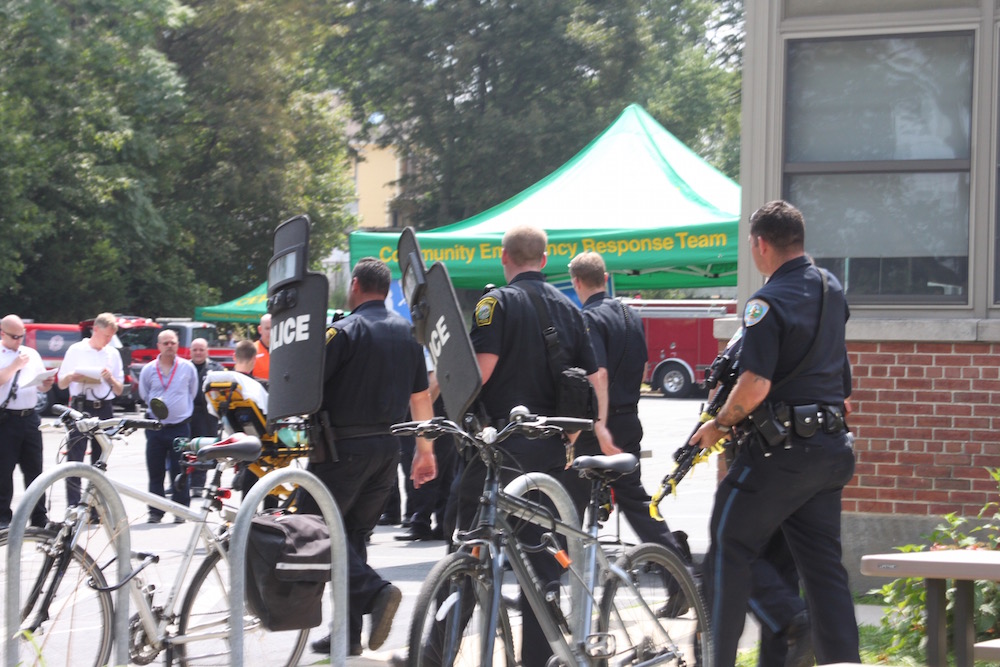 Watertown and Belmont police officers carry assault weapons and shields during a training for a variety of emergency situations at Cunniff Elementary School. 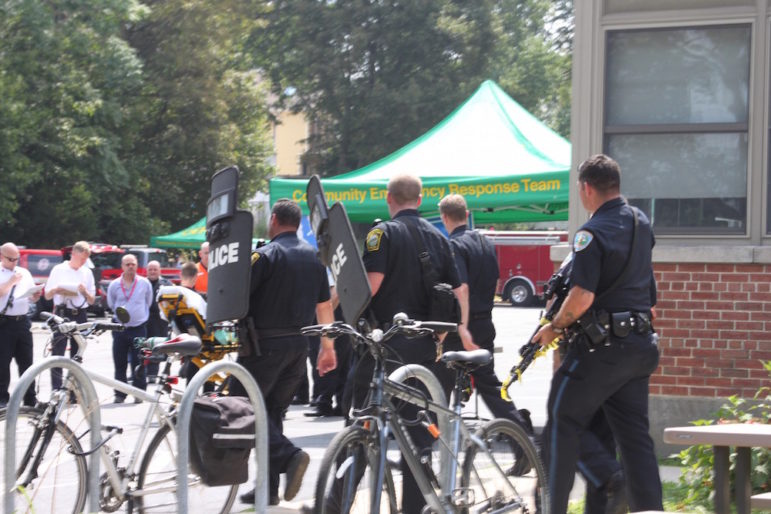 Watertown and Belmont police officers carry assault weapons and shields during a training for a variety of emergency situations at Cunniff Elementary School.

Police officers armed with assault rifles rushed into the front door of a Watertown elementary school, and a few minutes later Firefighters emerged carrying injured people on gurneys to the waiting swarm of emergency vehicles. Just then, the emergency radio crackled “This is a drill.”

Tuesday afternoon, Cunniff School was the scene of a massive emergency preparedness drill for not only members of the Watertown Police and and Fire Departments, but also their colleagues from Belmont.

The first responders went through four scenarios, two with Watertown as the lead agencies and Belmont providing backup, and two with the roles reversed. They dealt with an intruder in the school, as well as dealing with injury situations.

Since the hunt for the Boston Marathon bombers came to Watertown, there have been few times when Watertown Police have worked together with other agencies. Police Capt. Thomas Rocca said Tuesday’s drill provided valuable practice for about 20 Watertown Police officers.

“We try to do as much training as possible, but we don’t get opportunities like this very often,” Rocca said. 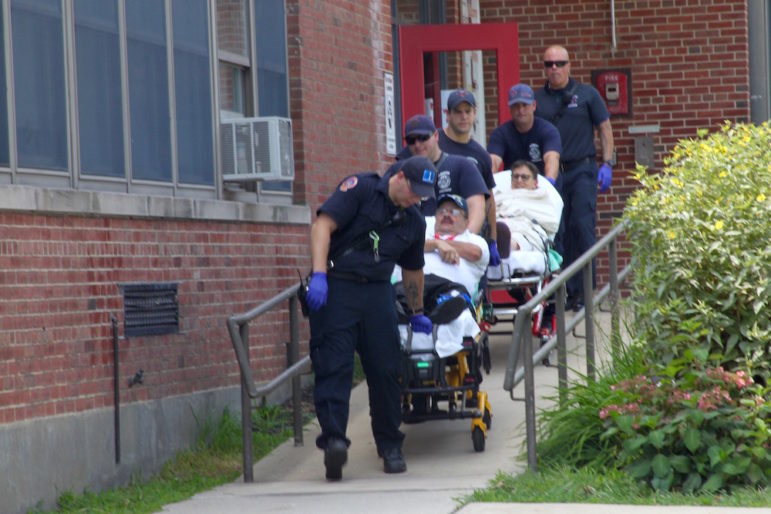 Watertown firefighters remove “victims” during an active shooter drill held at Cunniff School. The injured were played by volunteers from the town’s Emergency Reserve Corps.

The Watertown Fire Department works with other departments to provide mutual aid during bigger fires and incidents. Still, Deputy Fire Chief Tom McManus welcomed a chance to work with Belmont Firefighters and the police departments from both towns.

“We are always working on good coordination, good cooperation,” McManus said. “Afterward we can tweak things that don’t go right.”

While the police and fire departments got most of the action on Tuesday, other Watertown departments were involved. It was the health departments from Watertown and Belmont that organized the whole drill, said Watertown Health Department Director Deborah Rosati. She and Belmont Health Director Angela Braun used emergency preparedness funds to pay for the training.

“We got the police and fire from both towns on board, and the whole event snowballed,” Rosati said.

While the Watertown Public Schools provided the location for the drills, students and staff did not participate on Tuesday, said Watertown Middle School Assistant Principal Jason Del Porto, who heads the district’s Critical Intervention team. Nonetheless, he was glad to see the training.

“We should do this more often,” Del Porto said. “Maybe we could do it with students and teachers.”

Students and staff will have drills this fall, Del Porto said. These days, the children are trained in the ALICE Model when dealing with an intruder on campus.

“It is the Run-Hide-Fight model,” Del Porto said.

To make the scenarios as real as possible, the details of each one were kept secret until the drill began, said Watertown Police Lt. James O’Connor. The neighbors were alerted before the drill began, so they were not alarmed by the heavy police and fire presence in front of the school.

The Health Department brought in its Emergency Reserve Corps to play the role of suspects and victims in the scenarios, Rosati said. Some even played the role of the media, and police and fire officials had to debrief them after the incident. 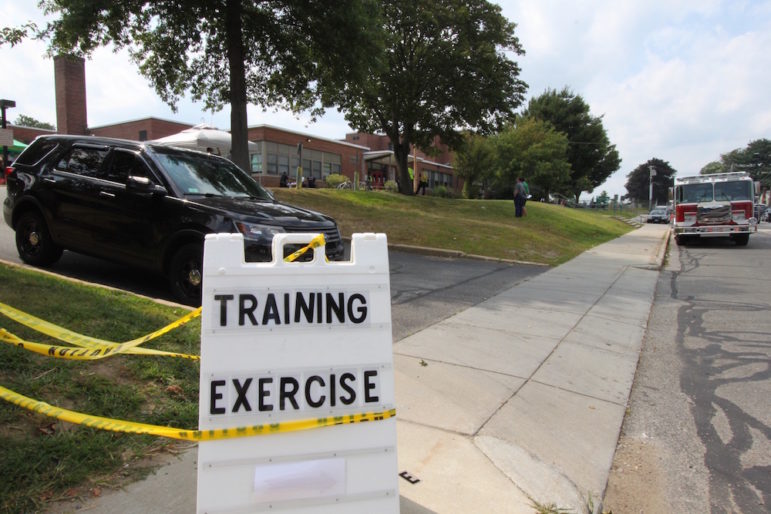 Warren Street was closed off so the emergency training drill could take place at Cunniff School.

“The dispatchers can work in there,” O’Connor said. “It can cut into the frequencies so we can coordinate.”

While running through the scenarios helps police officers, Rocca said the goal is not to “solve” an active shooter situation, but rather the importance of the drill was getting different departments working together.