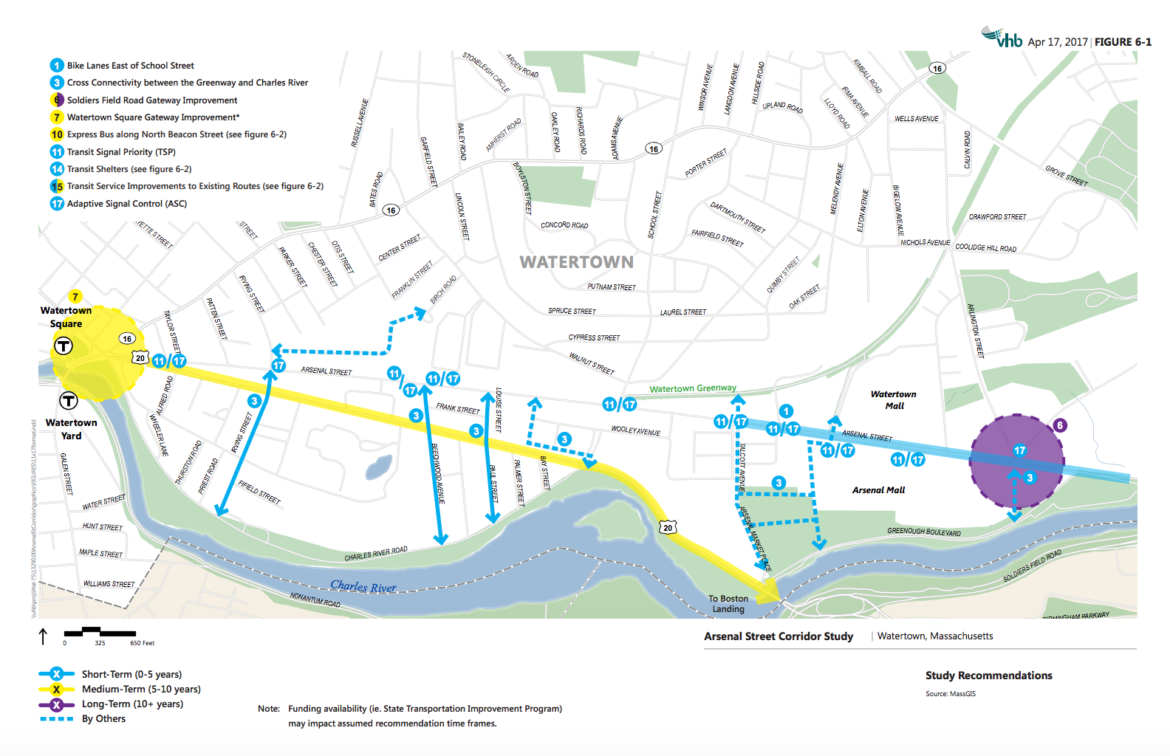 A map showing the locations of the MassDOT's recommended projects and changes along the Arsenal Street Corridor. 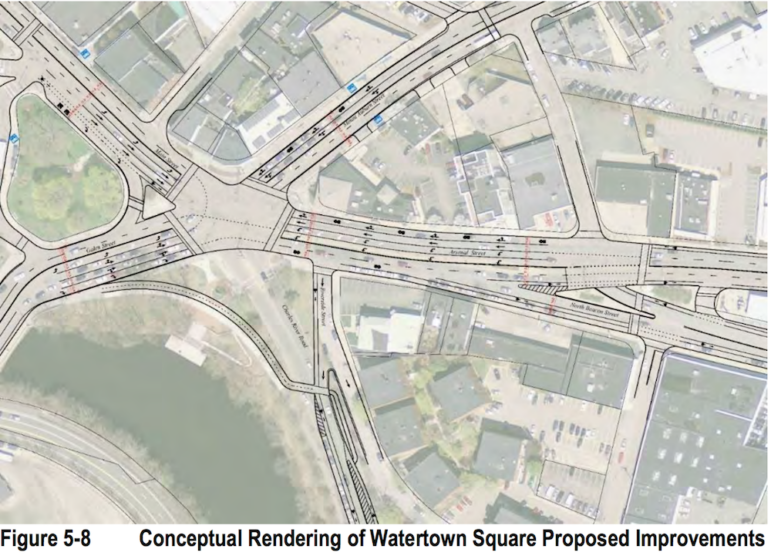 Removing Charles River Road from Watertown Square, making changes to the 70 bus and improving access for bicyclists made the list of recommendations in MassDOT’s final Arsenal Street Corridor Report.

The list of recommendations remained largely the same from the draft report released by the Massachusetts Department of Transportation in June. Officials added details to their recommendation for realigning Watertown Square, including removing one of the spokes off the intersection – Charles River Road.

The benefits would be simplifying the intersection which then allows the traffic light phasing to change and make the intersection more efficient. The report acknowledges removing the road would have some complications,

“Eliminating the Charles River Road approach to the intersection may also reduce ‘cut-through’ traffic in the adjacent neighborhood. However, it was noted through the public outreach process that Alternative 7 would include further refinement, traffic analysis, and more detailed evaluation of the potential benefits and impacts on adjacent neighborhoods, specifically along North Beacon Street, Irving Street, Riverside Street, and Charles River Road,” the report reads.

Another recommendation calls for making changes to the route of the MBTA’s 70 and 70A buses. The report calls for splitting the 70 and 70A into three routes: the existing Route 70, the overlapping “Trunk Route” portion of Routes 70 and 70A, and the North Waltham “Loop Circulator” portion of Route 70A. It also said an express bus should be considered along the main route.

The aim of the changes is to improve reliability, reduce crowding on buses and cut down on the bunching of buses – one coming right after another followed by long waits. 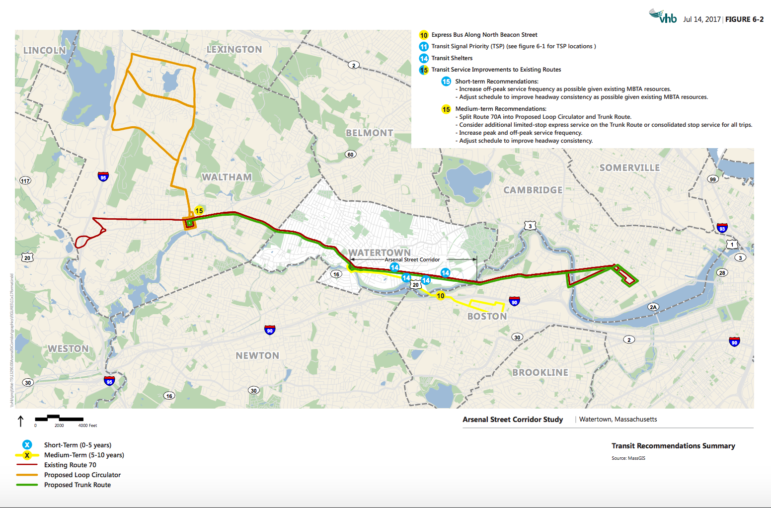 The Arsenal Street Corridor Report recommends splitting the 70/70A into three routes: the main 70 rote in red, the “trunk route” which includes the route shared by the 70 and 70A (green)and a Loop Circulator (orange), which includes the part of the 70A going in to North Waltham.

Another public transit recommendation is to create a pilot shuttle along North Beacon Street from Watertown Square to the Boston Landing Commuter Rail stop near New Balance in Brighton. While the route might be organized by the Town working with the MBTA, it will likely be funded by the Town and funds from private developers.

Bike accommodations also made the list, including redrawing the bike lanes on Arsenal Street, east of School Street, to provide 5-foot bike lanes. This would be done by reducing the width of vehicle travel lanes to 11 feet.

More North-South connectivity to the Charles River is recommended in the Arsenal Street Corridor Report,

The report recommends creating more north-south connections to the Charles River from Arsenal Street. That would be done by creating bicycle and pedestrian connections along roads such as Irving Street, Beechwood Avenue and Louise Street/Paul Street. These roads are not wide enough for a dedicated bike lane, so the report recommends adding shared lane markings on the streets to indicate that the road is also a bike route.

Soldiers Field Road Gateway Improvement – which includes improvements on the Boston side of the intersection as well as proposals to re-align Coolidge Avenue so it either hits Arlington Street further north or intersects with Arsenal Street. This would require cooperation of private land owners.