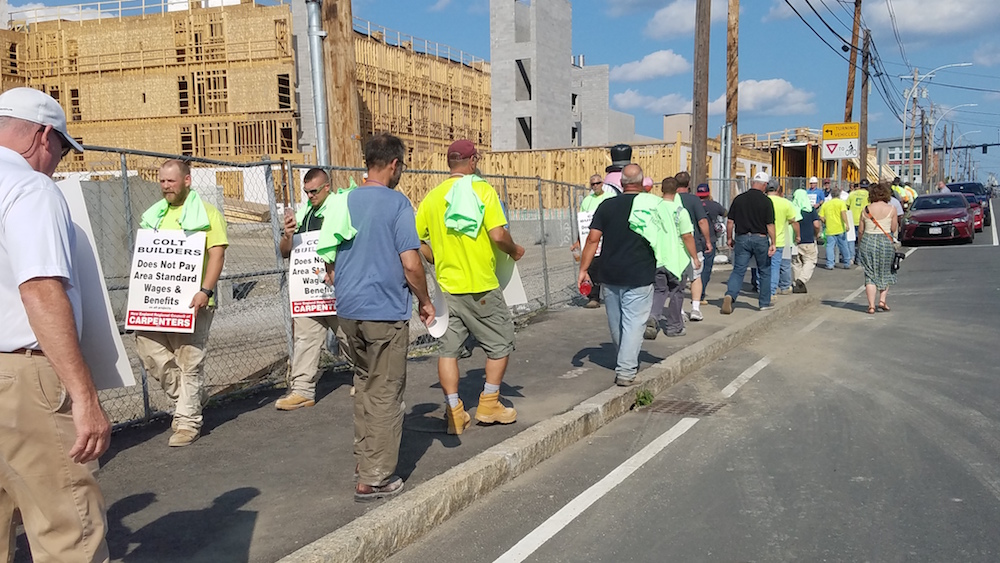 Members of the carpenters union rally outside an Arsenal Street building site asking for prevailing wages and fair treatment of workers. 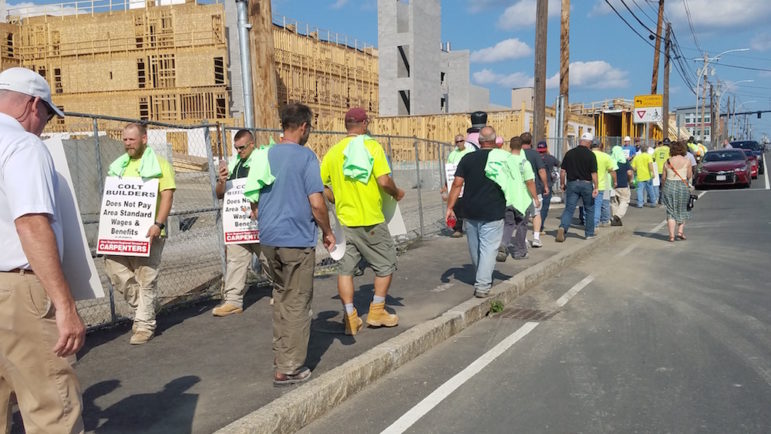 Members of the carpenters union rally outside an Arsenal Street building site asking for prevailing wages and fair treatment of workers.

Last week, a group of 40 or so carpenter union members gathered outside a construction site on Arsenal Street to make their message loud and clear – pay a living wage with benefits and follow state labor laws.

Despite the building boom in Watertown over the past several years, many members of the New England Regional Council of Carpenters who live in Watertown have not gotten any work from these developments.

They would like that to change, and point to cities like Cambridge and Somerville that have ordinance or resolutions pushing contractors to follow labor laws, and pay “prevailing wages” and health benefits for their workers. Not everyone believes that such an ordinance would benefit the town, however, and could dampen the hot development market.

Former Watertown Town Councilor Stephen Corbett, who also develops small residential projects, said he worries that such a requirement would hurt the development market in Watertown.

“I think it would definitely make Watertown less attractive to developers,” Corbett said. “It would not stop development but would make it more expensive.”

The prevailing wage in the area is about $38 per hour, which goes up to about $60 per hour with health care, pension and unemployment insurance (see the rates here, on page 48).

Wearing florescent green shirts and holding signs, the carpenters marched and chanted in front of one of the new apartment complexes going up on Arsenal Street. Like most of the other big developments on Arsenal Street and Pleasant Street, the contractor did not go with union workers.

“It’s a shame to live in Watertown and see all the projects go up and know they are not union projects,” said Tom Parmensi, who has been in the carpenters union for 10 years. “I’m working in Boston. When I go to work I go by all the buildings going up (in Watertown).”

Watertown’s Dan Campagna has had a few jobs in town, here and there. He recently worked on the new Intelligentsia Coffee on Mt. Auburn Street, but none of the larger projects. Campagna has been a regular at Planning Board meetings where major projects have been discussed. Before those meetings groups of carpenters will hold signs out in front of Town Hall, and he was at the rally on Arsenal Street.

“Right now we want to make sure that any work done, whether union or not, is done by contractors who pays taxes, supplies health benefits and is committed to safety for their employees,” Campagna said.

Those working non-union jobs said they sometimes get more in their checks, but that does not include items like health benefits. While many contractors cut checks to their workers, some will pay cash.

“I worked for 20 years before joining the union,” said Watertown’s James Tolman. “You may make more under the table, but that doesn’t help when you have a problem with your tooth and you need dental work.”

Some workers see hope from the upcoming Arsenal Yards project, which will transform the Arsenal Mall into a complex with shops, apartments, a hotel and more. Nick Crimaldi, who lives in town, has followed the approval of the Arsenal Yards and said the developers have an opportunity to continue a traditional part of the property.

“I think a significant part of the history of the Arsenal is it was an economic driver for the town” Crimaldi said. “Generations of people have had well-paying jobs working there and have been able to raise their families.”

Over the last couple years, the idea of Watertown having an ordinance similar to those in Somerville and Cambridge has been brought up by Town Councilors, but only as part of discussions of other issues. No formal agenda items have come forward.

Councilor Aaron Dushku said he and other councilors have acted as informal intermediaries between trade unions and developers doing work in town to try to find a way for them to work together.

“I’m only aware of one Watertown developer who has worked with a trade union on a project and that’s Boylston Properties (the Linx project),” Dushku wrote in an email. “This did not go unnoticed and it deserves our recognition and praise.”

Town Councilor Lisa Feltner stopped by last week’s rally, which took place in her district. She said the Council has not looked into the subjects brought up on a formal basis, but she would like to look into it further.

“I’m interested in exploring these issues further including why large Watertown projects aren’t hiring union and local workers and how we’re ensuring state labor laws are being followed,” Feltner said.

Town Council President Mark Sideris said he is aware of the issues, and he is looking into what the town would have to do to create a responsible employer ordinance in Watertown.

“I have been contacted and am looking at how this would work and how it may be brought forward,” Sideris said.

He did not say if and when it would come forward.

Former Councilor Corbett noted that most communities with such ordinances are bigger cities.

“They can pull it off because the development costs are out of site, so they can afford it,” Corbett said.

Corbett said he would oppose such an ordinance if he was still on the Council.

“We should let the market decide which shop gets hired,” Corbett said. “The best shops get the job.”

He also is not convinced that having a firm using union workers guarantees quality work.

Ordinances in Other Communities

Looking at nearby communities to see what such an ordinance may look like, the Somerville ordnance passed in 2008 requires contractors to: pay a prevailing wage, offer hospitalization and medical benefits, have accident insurance and comply with laws regarding paying taxes for employees. Also, workers must have completed a “bona fide apprentice training program.”

The Cambridge City Council passed a resolution in 2016 condemning a contractor for using unethical practices, including paying under the table, not providing benefits, misclassifying employees as independent contractors, and having unsafe working conditions. See the Cambridge resolution here (it is on page 338 and 339).

In February, Quincy’s City Council passed an ordinance to address the “underground economy,” including the misclassification of workers as independent contractors and not full-time employees, and thus not providing benefits; as well as paying cash and not paying taxes for the employees. The ordinance has the “nuclear option” giving the city to ability to pull the plug on a project where these violations are found.