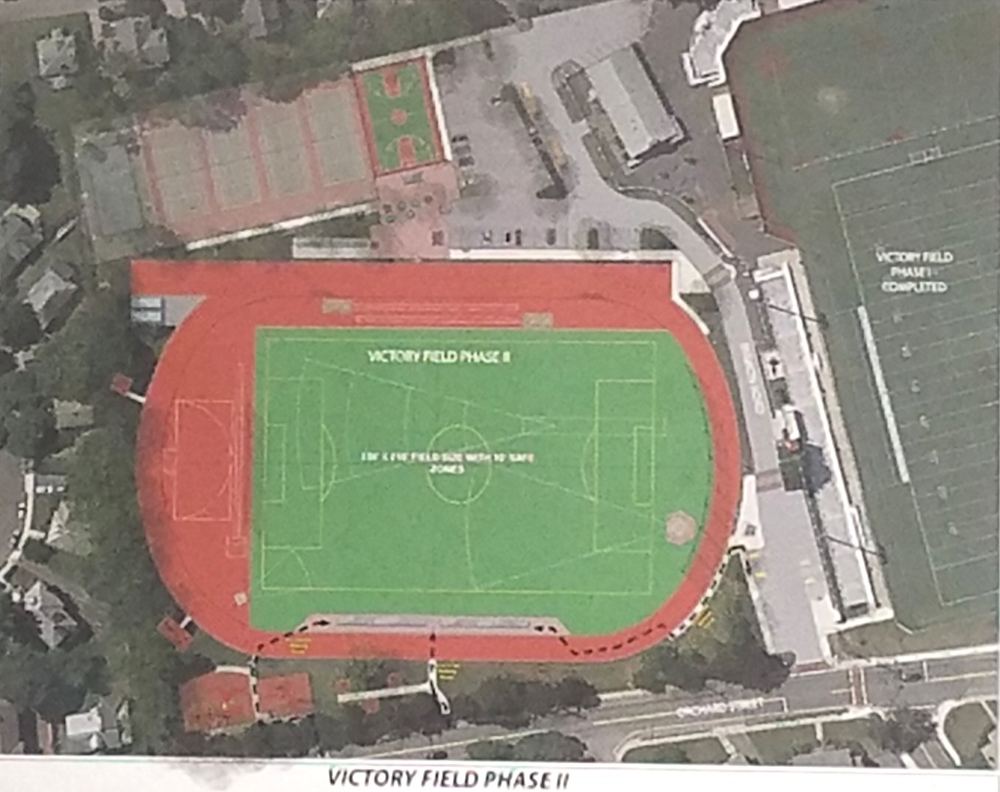 An illustration of the proposed changes to Victory Field. Some of the proposals were not adopted, including the joint shot put and bocce courts (the grey square in the top left corner) and the netting that can be made out on the ends of the grassy area. 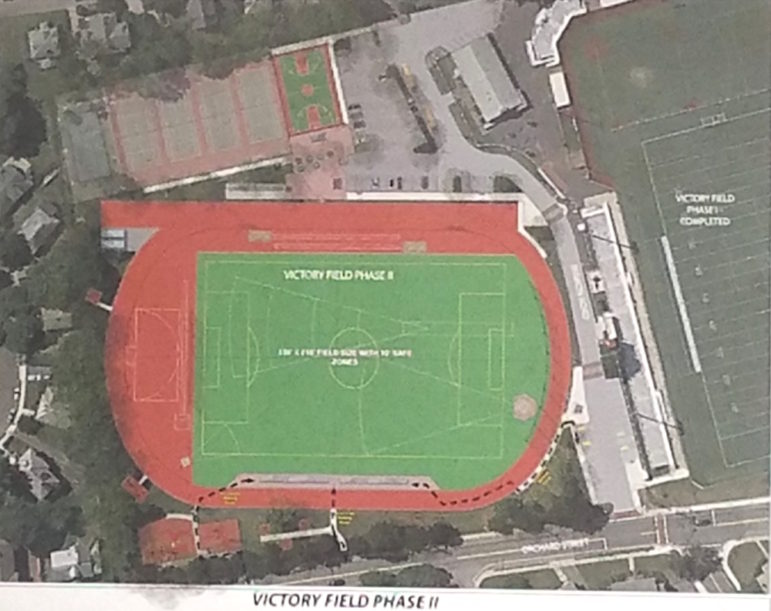 An illustration of the proposed changes to Victory Field. The parking area, in the top center of the photo, will be discussed Tuesday night.

The Ad Hoc Victory Field Committee will discuss parking at the complex on Orchard Street at its meeting Tuesday evening.

The original proposal made a few years ago called for an expansion of the parking by moving over the tennis and basketball courts. Also, a turnaround area would be created to make it easier to maneuver inside the Victory Field parking area.

Some residents have already expressed their concern that park space would be sacrificed for parking spaces. However, proponents of more parking say the lot cannot handle the number of vehicles coming to the field today.

The committee will not discuss items originally scheduled for Tuesday’s meeting, including landscaping, stormwater, and perimeter walls and fences. Those will be delayed until the Sept. 19 meeting, along with the continued discussion of lighting for the track oval and the tennis and basketball courts.

At their Aug. 7 meeting, the Victory Field Committee heard proposals for lighting, but no decisions were made.

A representative from the lighting manufacturer, Musco, brought in information about their newest lights, which have more tightly focused beams of light and covers to prevent glare.

The representative proposed having eight, 40 foot tall poles with three light fixtures per pole for the five courts, said Councilor Vincent Piccirilli, chairman of the Victory Field Committee. The lights could be put split into three zones – 2 courts each, and be put on a push button system where they go on for 60 minutes (or 30) each time the button is pushed, with a cutoff time for the lights of 10 p.m. Currently there are eight, 25 foot tall poles with a total of 23 floodlamps and they go on at dusk and stay on until 10 p.m.

Before making a decision committee members asked to see the lights that have been installed in other facilities, Piccirilli said.

For the track and field areas, Musco’s representative suggested using four 80 foot high poles to reduce the glare and spillover of light, Piccirilli said. There are no flood lights for the field now, but there are security lights on utility poles around the oval. These do not do a good job lighting the field and also shine into neighbor’s homes, Piccirilli said.

How much lighting is needed at the field was also a topic of discussion. The original proposal from 2014 had lights with 50 foot-candles of illumination, which is enough for a game to be televised, Piccirilli said. However, for a high school field with limited seating the U.S. Soccer Foundation recommends lights only be 30 foot-candles.

The lighting representative said the lights could be programed to give more or less light depending on the situation: 30 FC (100 percent power) for games, 15 FC (50 percent) for general recreational use and 5 FC (15 percent) for security.

The Committee also wanted to consider lighting the track separately from the field, Piccirilli said, and asked Musco and project designers from CDM Smith to come back with some options.

The Committee did agree that when the field is not in use, from mid-November to mid-March, the lights should be programmed to be off, Piccirilli said.