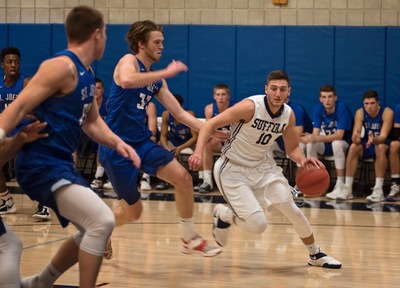 Current Suffolk University and former Watertown High School basketball player Michael Hagopian got the chance to represent Armenia in the FIBA Under-20 European Championships, Division B this summer.

Hagopian played in all six of Armenia’s games in the tournament in Romania, averaging 8.5 points, 3.8 rebounds and 2.3 assists per contest. His shooting percentage was better from behind the three-point line (47.8 percent) than he was from the floor (35.2 percent). His three-point accuracy was second highest on the team and 10th highest in the competition. He was the team’s fourth highest scorer.

Hagopian’s tournament high scoring game was against Belgium, when he scored 21 points. Against Ireland he had nine points, six assists and four rebounds.

Hagopian is going into his junior year at Suffolk. In his sophomore year, he averaged 14.3 points per game and made 40.3 percent of his three-pointers, and had back to back games where he scored 34 against Anna Maria and 36 against Rivier. Hagopian was named to the second team All-GNAC team.

Click here for more details, and to find links to full-game videos of the games.

See photos of Team Armenia, including Hagopian, by clicking here.