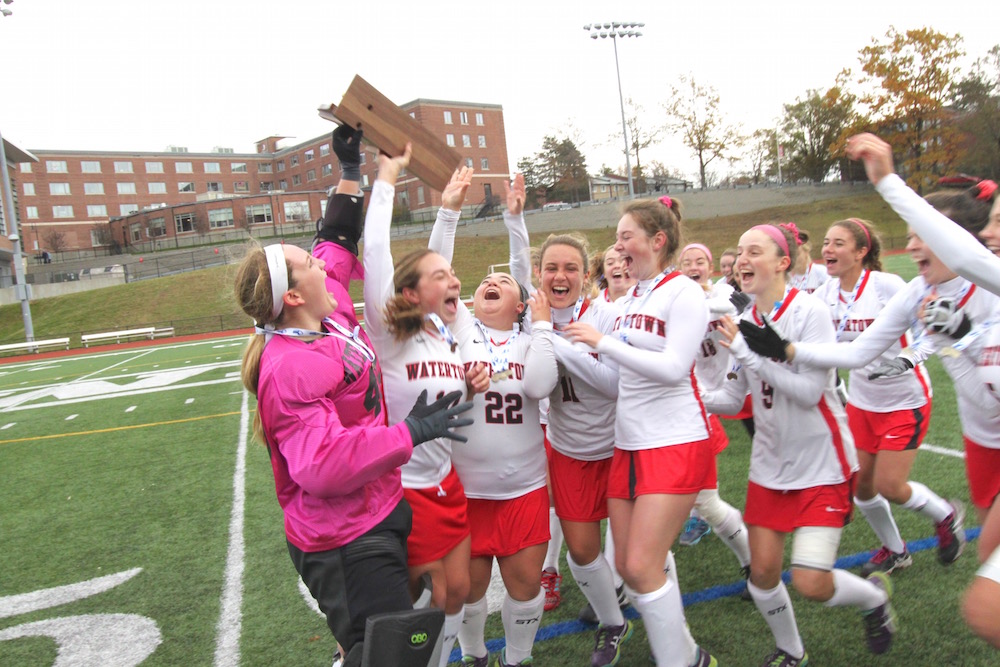 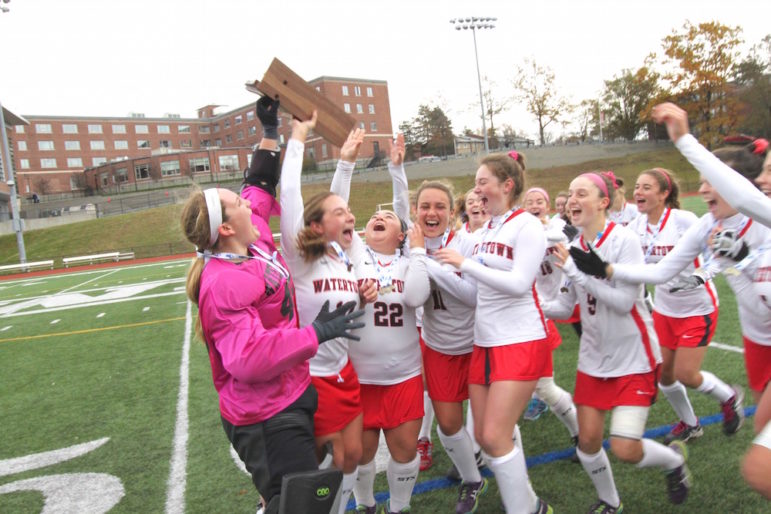 WORCESTER – Coming into the MIAA Div. 2  Field Hockey State Final the crowd for Oakmont and others believed this was the year to beat Watertown, but as the final seconds drained away it was the Raiders celebrating a State Championship – for the ninth straight year.

The final was a rematch of 2016 when Watertown narrowly defeated the Spartans, 4-3. This year the Raiders had lost a game for the first time in more than eight years and only won their last two tournament games by a goal apiece. Saturday morning, however, Watertown put its offense into high gear and won 5-1 at WPI.

Going into the game, Watertown field hockey coach Eileen Donahue used some advice that she was given by her brother to inspire her players.

“They want to leave with their one last moment, each play had to be a moment,” Donahue said. “If it was a bad play, they didn’t want to leave on that moment. Keep working on it. If you make a mistake, do something else.”

Watertown made their moments count. Two of the Raiders’ captains got a pair of goals, each, but it was junior Gabby Venezia who got Watertown on the board when she scored on a pass from junior Olivia Lampasona off a corner with 22:57 left in the first half.

Watertown senior captain Sydney Poulin appeared to score six minutes later, but the goal was ruled no good by the referee. She could not be denied and scored an unassisted goal 2:43 left in the first half.

Oakmont applied pressure on both ends, and on their corners they brought all 10 field players up on the attack. Watertown senior goalie Jonna Kennedy, a co-captain, save all the attempts in the first half. 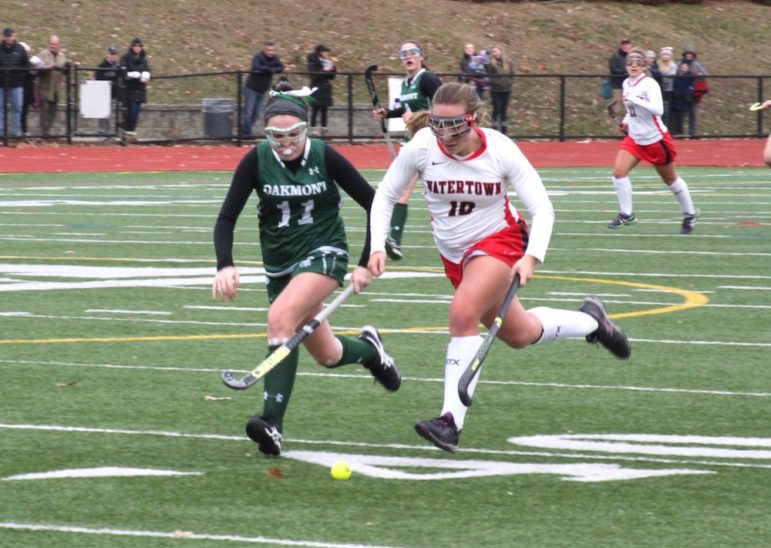 Watertown senior Sydney Poulin charges up field with the ball against Oakmont. The Raiders co-captain scored twice in the final and drew a penalty stroke.

After halftime, senior co-captain Maddie Leitner found the back of the net less than two minutes in to give the Raiders a 3-0 lead.

Four minutes later Poulin made it a four goal lead when she intercepted a pass and drove on the goal, putting the ball into the back of the net.

The Spartans’ aggressive offense finally paid off with 15:14 left in the second half. Senior Madelyn Moran scored on the corner with an assist to Taylor LeDue.

Four minutes later, it was Poulin back on the attack. She took the ball from about halfway into her own half ran across the center line, past a couple Spartan defenders and went on goal alone. When the goalie went for the save she tripped Poulin, and a penalty stroke was awarded. Leitner stepped up and burred the shot into the top corner to make it 5-1 Watertown.

“It was just a really good job by Sydney to get that stroke and then me being able to finish,” Leitner said. “She earned it, though.” 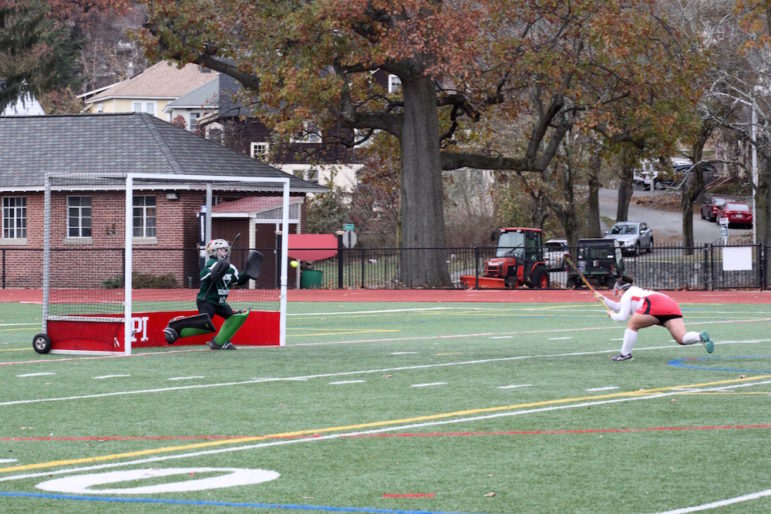 Watertown senior Maddie Leitner scores her second goal of the state final on a penalty stroke.

Donahue planned to address her team like she does after every game, but this time she just went around and gave each player a high five.

“I was going to talk to them, I didn’t want to hold (the media) up but at the same time this has been a long season – trying to get everyone’s level up,” Donahue said. “I just looked at them and said ‘I can’t do it. I’m just giving you a high five.'” 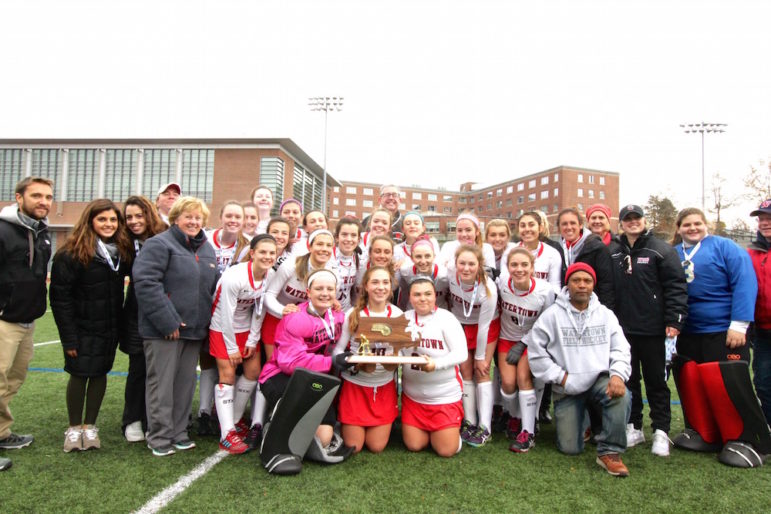 The Watertown High School field hockey team poses with the state championship trophy. The win in Worcester on Saturday gave the Raiders their ninth-straight title.

The Raiders finish the season 22-1, and on the way claimed their 10th straight North Section title and ninth straight state crown.

Poulin said the team has been working toward winning the state final all year.

“Honestly, it’s an amazing feeling,” Poulin said. “It’s unreal. I’m so proud of this team. We worked so hard, every single day of the season – every game, every practice. We deserved this game.”

The seniors graduate with four titles. The win was an emotional one, Kennedy said.

“They came out hard, but we came out way harder,” Kennedy said. “We wanted it so bad, and for the seniors it was our our last game playing for this team. It was sentimental for us. I just feels so good to get the win.”