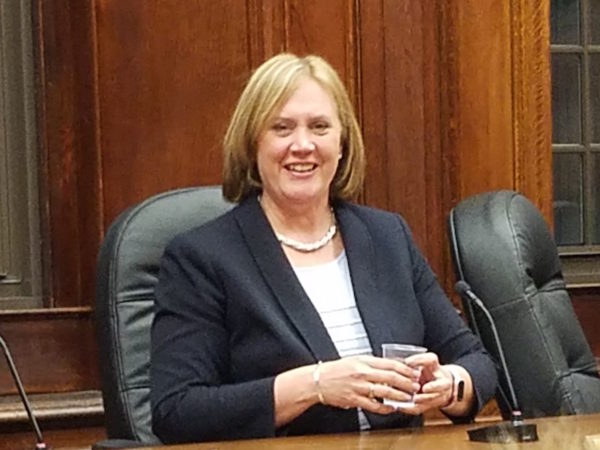 During her first six months as Superintendent, Dede Galdston dove deep into the workings Watertown Schools and came up with recommendations to improve the schools in areas ranging from student success, aligning the curriculum, improving communication, staff diversity, and, of course, improving the school buildings.

Monday night, Galdston introduced her Superintendent’s Entry Plan to the School Committee. The report came from Galston’s conversations with more than 75 individuals and groups over the last half year, plus examining district test results, curriculum and other material.

Participants welcomed the opportunity to speak with the superintendent, Galdston noted.

“Time and again, I heard that this was one of the first times that people had the opportunity to have an open conversation with the superintendent and that they hoped this type of communication forum would continue into the future,” Galdston wrote.

In the report, she addressed the strengths of the district, as well as areas that need work, and proposed some steps to get there.

Some strengths include: a strong sense of community, community service opportunities, class size, inclusion of special education and English language learners in regular classes, and that schools are welcoming to people from all backgrounds.

Areas she pointed to as places to improve include: integrating the curriculum, professional development for teachers new to the district, improving communication and marketing, technology, and the transitions between both elementary and middle school and from middle to high school.

She also set out “opportunities for growth and hopes for the future,” some of which are: opportunities for students for deep learning experiences, to challenge themselves, and provide skills needed after they leave the schools; reduce the number of students leaving for private schools; hire and retain a more diverse staff; develop partnerships so students can work with local businesses and organizations; and complete the building projects at the three elementary schools by 2021 and the high school by 2023, and begin plans to renovate or rebuild the middle school by 2025.

Galdston broke out several key areas in the report and provided more detail:

This is an area seen as both a strength and a challenge for the Watertown Public Schools (WPS). More than 30 percent of students in the WPS come from homes where English is not the primary language and 10 percent are considered English Language Learners – both higher than the state average.

The district is also diverse in terms of socio-economic status, special needs (learning and physical), and there is a large LGBTQ community.

Galdston also noted, however, that there are achievement gaps between members of these groups and the district as a whole – particularly for those in special education, English language learners and “economically disadvantaged” students.

“With the strong appreciation of diversity in the community comes a great responsibility to ensure equitable opportunities for all of our students, no matter where they come from, what challenges they face,what languages they speak or who they love,” Galdston wrote in the report. “Specifically, WPS needs to pay close attention to the expectations gap across our population and we have to work towards hiring a more diverse teaching staff that reflects our students population.”

As part of the effort to close the achievement gaps, the district has started a partnership with the Harvard Gradate School of Education, which is part of program called “Reimagine Integration: Diverse and Equitable Schools (RIDES).

Aligning the curriculum is something that Galdston pointed to as a priority. This is not just so it is consistent from the elementary schools through the high school, but also between schools and among classrooms of the same grade – even at the same school. She pointed to Watertown’s results on the MCAS – the state’s standardized test.

“As the MCAS data indicate, the lower-than-expected performance on MCAS may in part be attributable to inconsistency in curriculum,” she wrote. “In a given grade level, performance on MCAS may seem to be similar across buildings, but a deeper look into the data suggest that the curriculum may not be aligned to state standards and the delivery of the curriculum may not be consistently applied.”

The district has hired coordinators for  K-5 STEM (science, technology, engineering and math), K-5 Math and K-8 Literacy, along with adding layers of coaching for teachers and teacher leaders.

She also would like to see the district improve the use of data to improve instruction.

Galdston credited the WPS for never shying away from taking on new challenges or starting new initiatives to address needs, but she added that sometimes programs were not given a chance to work.

“When a program or initiative didn’t seem to be working, rather than assessing its implementation, a new program would often take its place,” Galdston said.

More collaboration time is needed for teachers, particularly at the elementary schools, where the schedule does not lend itself to teachers getting together to plan and share ideas.

The perception and the reality of what goes on at Watertown High School does not always match up, Galdson said.

She often spoke to parents who said they believed the high school needed improvement in academics, course offerings and extracurriculars. Some said it is more of a perception that these are needs.

Students she spoke with generally had positive experiences, and said teachers take the time to build relationships with them. The challenges often came from the lack of flexibility in the schedule which meant that students could not always take the courses they wanted due to conflicts.

While the high school building is in desperate need of improvement, the school offers small class sizes (an average class size of 17.5), has a wide range of classes, and WHS students consistently outperform the state average on the SAT and AP exams, Galdston wrote. More than 80 percent of the Class of 2017 went on to college, with nearly 70 percent attending four-year colleges, and less than eight percent of graduates did not have post-high school plan (some planned to work or join the military).

An area Galdston said she would like to see improved is making sure students at a variety of levels succeed. This includes typical students, those who are seeking challenges above what their classes offer and those needing extra help.

“The district does not have a fully developed Multi-Tiered Systems of Support that would address all three of these concerns,” Galdston wrote. “Developing and implementing this plan will take several years to come to fruition, but given the data, there is much support for developing such a system.”

All groups complained about the WPS website, as well as underutilization of other methods, such as social media, for sharing news and information.

Galdston said the district will form a Communication and Marketing team to “develop and implement a comprehensive communications and marketing pan to increase access to information, public awareness and perception of the excellent WPS educational program and to celebrate the successes of our school community.”

The improvement of Watertown’s school facilities is a priority, and efforts to make this happen had already started before Galdston arrived. In her six months as superintendent, however, progress has been made in leaps and bounds, including hiring the district’s representative to oversee the projects (owner’s project manager) and an architect for the elementary schools. Also, Watertown was invited by the state to apply for state funding to help pay for rebuilding or renovating the high school.

The new schools will have spaces for large and small group instruction, hands-on authentic learning experiences, collaboration and green space that can be used as an outdoor classroom, among other qualities, she said.

Other goals are to make the schools more community-centered and allow for intergenerational educational experiences and to host community events.

She added that communication will be key to the success of the high school building project, which will require approval by voters for Watertown’s share of the cost, just over half of the total.

“An informed community is more likely to support a Proposition 2-1/2 Debt Exclusion vote,” Galdston wrote. “Thus, we will clearly communicate the need for a fully reconstructed or a new High School and, once determined, the rationale for the preferred option for its location.