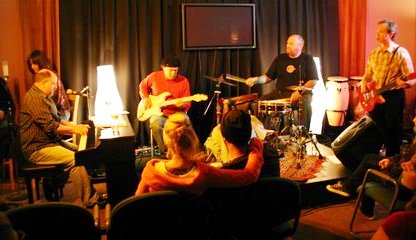 The Right Turn addiction treatment center in Watertown hosts performances for those getting sober most Saturday nights.

The Right Turn addiction treatment center in Watertown hosts performances for those getting sober most Saturday nights.

An addiction recovery center that started as a place for rock musicians to get sober has moved to Watertown and found success in treatment that includes art and music in the therapy.

Right Turn, located on Arsenal Street, began in 2003 when Woody Giessmann – former drummer of The Del Fuegos – realized there was a need for recovery for musicians and other creative people.

The center’s first offices were located in Arlington, but moved to Watertown a few years ago when it needed more space.

In 1993 Giessmann became an addictions specialist after facing drug and alcohol addictions while he was a musician, said Gabrielle “Abby” Dean, clinical director for Right Turn, who has been working with Giessmann since 1995

Enough musicians or their agents called, Dean said, and they decided to start groups for people looking to get sober. The sessions were held during the day so that musicians could then perform at night, Dean said, which was a hard thing to find in the Boston area.

The types of addictions Right Turn has treated has changed in recent years, Dean said.

“At first … people were getting sober for alcohol use,” Dean said. “Then younger people on opioids started coming in a few years ago.”

She has also seen an increase in people seeking help for addiction to marijuana.

The therapists at Right Turn often use art and music to help with treatment, Dean said. The walls of the center feature artwork made by clients, as well as by Giessmann who paints portraits of famous musicians. However, people do not have to be in a creative field to get services at the center.

“You just have to be willing to be in art therapy or be in a drum circle,” Dean said.

The methods used by Right Turn have proven more successful than most recovery programs. About half of clients drop out before the end of three months in most programs, but at Right Turn, 75 percent stay in at least that long, according to the center.

The three month mark is an important one in addiction recovery, according to Dean, who said the brain starts to change at that time and people begin to form habits and change behavior patterns.

If someone starts using again while in treatment, Right Turn tries to keep people in recovery.

“If there is a relapse we don’t kick them out,” Dean said. “We provide more help, rather than less.”

People can continue treatment as long as they would like, Dean said.

“Some people stay a long time,” Dean said. “It gives more time for the brain to heal and the longer the brain heals the better for long-term recovery.”

One of the challenges for people trying to beat an addiction is to resist temptations. This can be a particular problem when people look to go out and enjoy themselves.

“When people are getting sober one hard things is having fun and hear some music and not going out to a bar,” Dean said.

Right Turn has created a place for people in recovery to have some fun. On most Saturday nights the ground floor of the center, which has a stage, becomes a place for concerts, open mics, and comedy shows, Dean said. The program is called Right Turn LIVE!

The performances are open to the public, and information about Right Turn LIVE! and a schedule can be found here: https://www.facebook.com/rightturnlive/

Right Turn has a staff of about 15 people and they treat about 30 people a day, Dean said. The center offers programs both during the day and at night. There are also programs where family and loved ones of those addicted can get information and support.

Another service at Right Turn is holding interventions.

“It is not like the ‘Intervention’ show,” Dean said. “It’s nicer. They want people to get sober.”

For more information about Right Turn visit http://right-turn.net/ or email info@right-turn.net or call 781-646-3800.