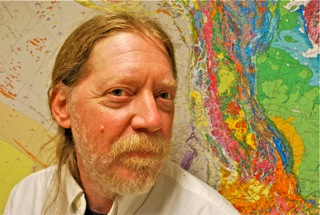 While searching for the remains of plants and pollen in 200 million year old sediment, Boston College scientist and Watertown resident Paul Strother and a Dutch colleague discovered the remains of an ancient butterfly much older than ever found – a discovery that may change the understanding of prehistoric plants.

While spending time in Germany in 2012, Strother examined some cores from Northern Germany with Bas van de Schootbrugge, a Dutch microfossil paleontologist who at the time had a lab in Germany. It took a few years, and collaboration with a number of other scientists, to find out just what they had found.

“It sort of shows how sciences works, sometimes,” said Stother, a research professor in paleobotany in BC’s Department of Earth & Environmental Science. He lives in Watertown with his wife Ceclia Lenk, a former Town Councilor.

After dissolving all the non-organic material with acid, they looked through the remains of pollen, plants and other former living things. One of the things they found was not immediately identifiable.

“We found scales. At first we thought it might be some sort of algae,” Strother said.

Then he remembered a picture in a textbook that he had once seen that made him think they looked like scales from the wings of a moth or butterfly. However, that did not make sense, at the time, because it was thought that butterflies evolved after flowering plants developed, which was 70 million later than the age of the sediments they were studying.

Strother reached out to a scientist at Chicago’s Field Museum who studies insects, who said the scales could be from a number of insects.

“We were kind of stuck,” Strother said. “Neither (van de SchootBrugge) nor I are experts in insects. We are plant people and geologists.”

In 2014, while attending a conference in Paris, Strother was having dinner with a Torsten Wappler, from University of Bonn in Germany. Wappler was part of a group who had just built the evolutionary tree of all insects using molecular techniques.

Strother had his computer with him and showed Wappler a picture of the scales.

“He was excited and said he would look at them in more detail,” Strother said.

Identifying what type of insect the scales came from was not possible from the photos, but Wappler believed it was possible if someone could look at the material from the core. It would take a lot of work, so in 2015 Wappler sent a student to work with van de Schootbrugge, who had since moved to the University of Utrecht in the Netherlands.

“They were able to determine the species that the scales belonged to have proboscises,” Strother said, referring to the long tube butterflies use to suck nectar out of flowers.

The discovery was featured in a scientific paper in the Jan. 10, 2018 issue of the scientific journal ScienceAdvances (click here to see the paper). It has also been picked up by the media around the world, including the Washington Post, the New York Times, the BBC, USA Today, and Smithsonian magazine, among others.

The discovery of a butterfly 70 million years older than the oldest known flowering plants brings up new questions.

“Does that mean flowers are older, or did they evolve because of animals with proboscises?” Strother said.

Despite his venture into entomology, plants are still Strother’s thing.

“I still don’t know much about butterflies,” Strother said. “That is why science is done today in groups.”