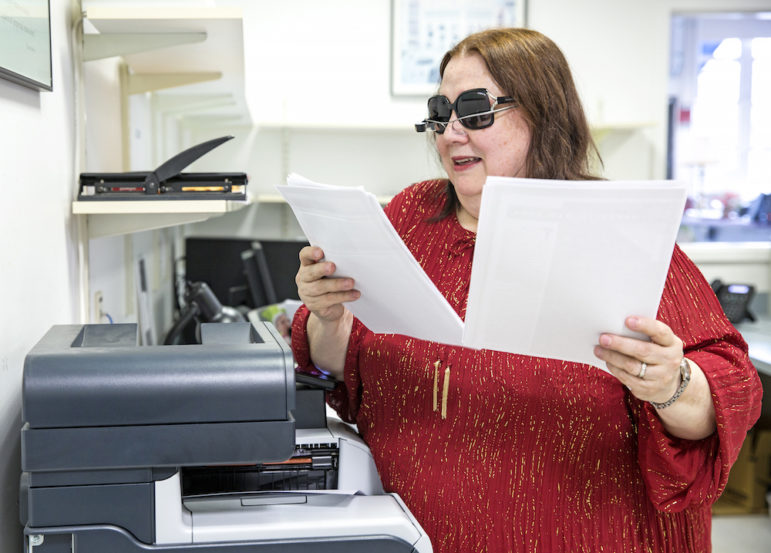 Perkins School for the Blind

Some employees at Perkins School for the Blind have been testing some high tech glasses that give the blind and visually impaired new independence. They don’t let users see better, per se, but instead they have a camera that allows someone to watch a live stream video and give the wearer instant descriptions and directions.

The technology was developed by San Diego-based startup Aira, which this week announced a partnership with the school in Watertown – the first of its kind in the country.

One of those who piloted Aira was Kim Charlson, executive director of the Perkins Library. Charlson is visually impaired and uses her seeing-eye dog Dolly to help her get around. While she said she would not give up Dolly, Aira allows her to have more independence.

By contacting an Aira agent on her cellphone, Charlson said she can get help sorting a pile of copies to find hers, navigate a snowy or icy sidewalk safely or, as she did recently, help her mother use a cellphone app to document damage from an auto accident to start an insurance claim.

She has taken it on other real-world tests, including a trip to Fenway Park for a Red Sox game with her husband, who is also visually impaired. Unfortunately neither the weather nor the Red Sox were good that day.

“It was a rainy and cold day. It’s the end of the sixth inning I’m freezing and they are going to lose,” Charlson said. “We left and started to make our way out of the Park, which is not easy with 1,000s of others doing the same thing.”

Charlson called Aira and the agent guided her out and called and Uber so she and her husband could get home. The agent was able to navigate them through the crowd and to the street where they would meet their ride. Agents have a dashboard that allows them to do things like track the progress of an Uber.

“Normally it would have taken forever to get out of the park and get a cab,” Charlson said. “But it happened so effortlessly.” 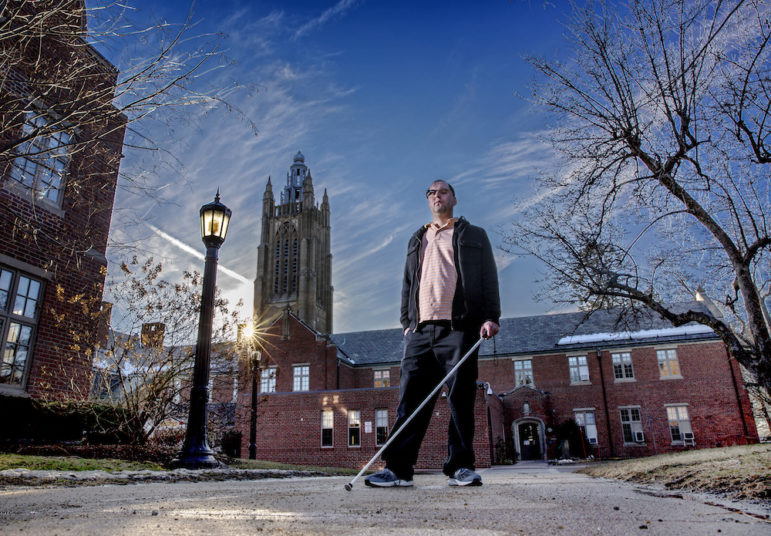 During the announcement of the partnership, Cory Kadlik gave the audience a live demonstration. Kadlik is a Perkins graduate who now works as assistant technology specialist at the Perkins Library.

Aira has been a big help for him. He said he uses for things like taking a stroll across Boston Common, which sounds simple, but he said for a blind person walking in a straight line is not so easy.

He put on his Aira glasses, pulled out his phone and put it on speaker so people could hear the agent. He asked her to describe the room, and then had her guide him over to the refreshment area so he could prepare a coffee for his guests.

The agent told him which direction to walk, what objects were on the floor in his way, and when he got to the coffee bar what was in each canister.

Then he asked her to help him find Perkins President Dave Power so he could thank him for making the partnership with Aira a reality. The agent looked up Power on the Perkins website so she knew what he looked like, then she asked Kadlik to scan the room until she spotted him. After a few seconds she located Power and told Kadlik which direction to walk so he could shake his hand.

Aira co-founder and CEO Suman Kanuganti was also on hand for the announcement. The company is his second startup and the idea for glasses to help the blind came when he was brainstorming products with a visually impaired friend.

The company has hundreds of subscribers, so far, and there are close to 100 agents spread across the United States. Aira has partnered with AT&T so that subscribers get priority access to the AT&T network, Kanuganti said.

Subscribers pay a monthly fee and get a set number of minutes of assistance from agents. However, by partnering with Aira, subscribers can use the service while on the 38-acre Perkins campus without using their minutes.

To encourage more technology tailored for the blind and visually impaired, Power said the school will host a hackathon in the spring where students from universities around the country will descend on the Perkins campus and work with students from the school to develop new products.

Some of the challenges that have been offered are to help the blind do everyday tasks.

“Using appliances can be difficult because modern appliances have flat buttons,” Power said. “Also, filling out confidential forms at a medical office or using software to read a computer screen – a lot of the reading software had trouble with screens.”

So far, students from 20 colleges across North America have signed up, including from Yale, Duke and the University of Wisconsin, along with from local institutions.

The school has gotten sponsorship for PerkinsHacks from Google, Microsoft, IBM, Power said, and Lyft will provide free transportation for participants.

The hackathon will take place on April 13-14, from 5 p.m. Friday to 5 p.m. Saturday. At the end, Power said, teams will present their ideas and prizes will be awarded. Volunteers are also being sought. For more information about PerkinsHacks to go: http://www.perkins.org/get-involved/events/perkins-hacks