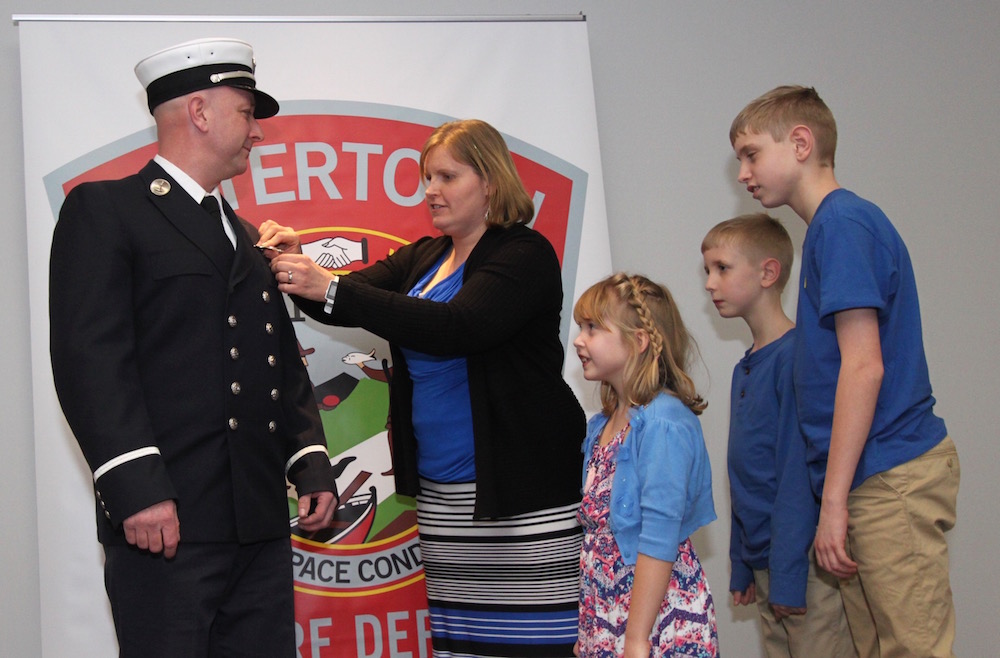 Watertown Fire Lt. Eric Allen received his badge from his wife as his children watched during Friday's swearing-in ceremony. 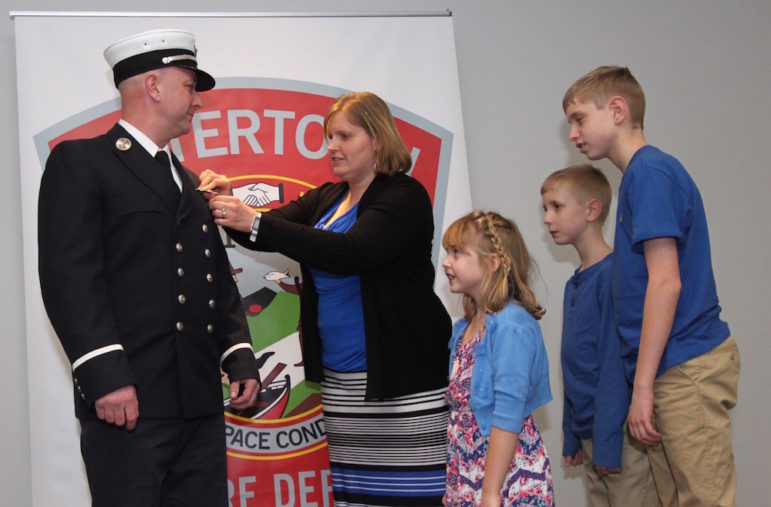 Watertown Fire Lt. Eric Allen received his badge from his wife as his children watched during Friday’s swearing-in ceremony.

Firefighters, police officers and others who acted quickly to save lives received awards for their good work Friday, and the Watertown Fire Department swore in their recently promoted and hired members.

The Watertown Library’s Watertown Savings Bank Room was packed with family members and well wishers for the ceremony.

Acting Fire Chief Bob Quinn said he was happy to mark something positive after a tough stretch for the Fire Department during which Firefighter Joe Toscano died while fighting a fire and Fire Chief Mario Orangio was diagnosed and died from cancer linked to his fire service.

“The last year and a half has been rough for the Watertown Fire Department,” Quinn said. “It is great to be here for a happy occasion.”

Elderly Woman Rescued from Under Car 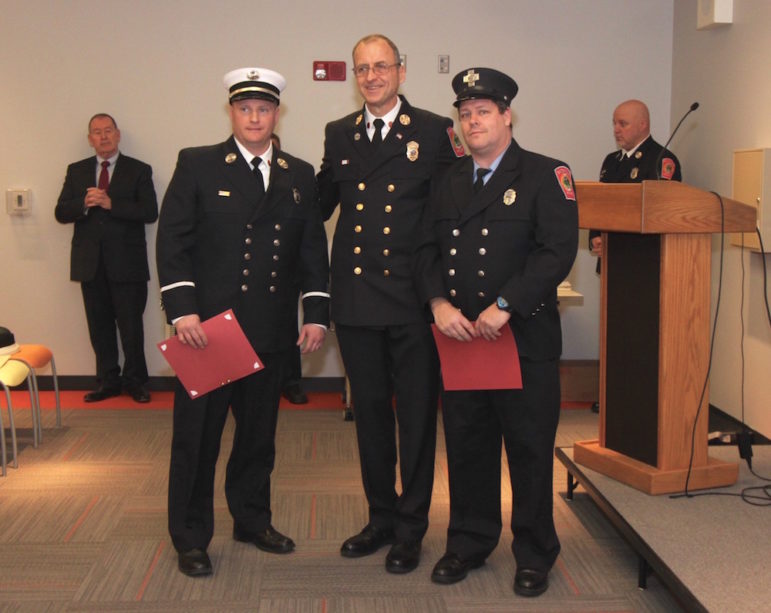 The Commendation Board of the Watertown Fire Department approved awards for people involved in three separate incidents where a person faced grave situation but whose life was saved.

The first incident took place on Dec. 15, 2015, when an elderly woman was struck by a vehicle that was backing out of a driveway at the corner of Adams Street and Mt. Auburn Street, Quinn said.

“The patient was trapped under the vehicle and was in cardiac arrest,” Quinn said. 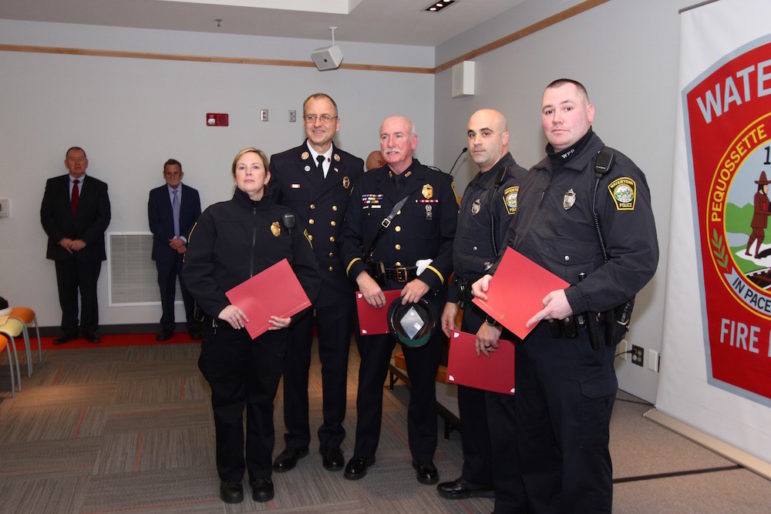 Watertown Fire Engine 2, Ladder 2 and C2 responded to the scene. The tools needed to remove the vehicle were not immediately available, and construction in the area made accessing the scene difficult. Therefore, the Fire and Police personnel on the scene decided to lift the vehicle by hand. They also got help from construction workers from Feeney Brothers Utility Service and a Billerica Police Officer who was at the scene.

After the vehicle was removed, the patient was taken to Beth Israel Deaconess Medical Center by Armstrong Ambulance and a pulse was regained by the crew on the way to the hospital. 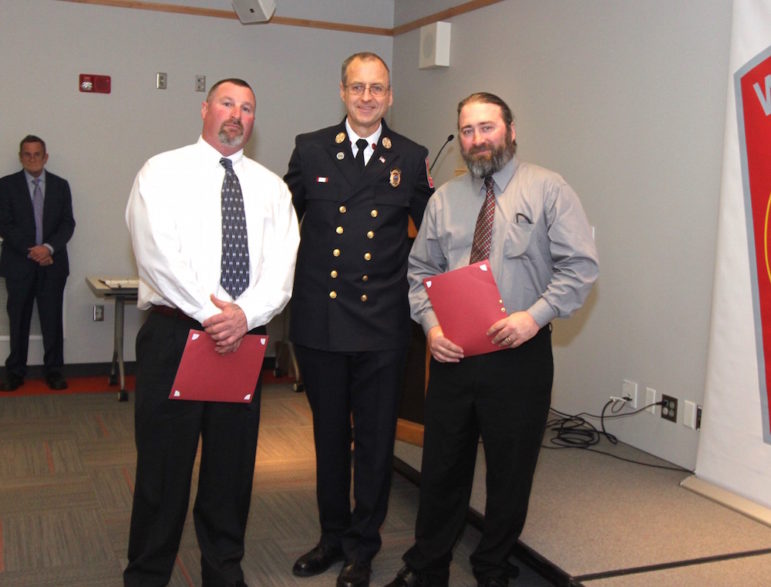 Scott Embree and John Ward of Feeney Brothers helped save a woman trapped by a car. They received the Medal of Commendation from Fire Chief Bob Quinn. 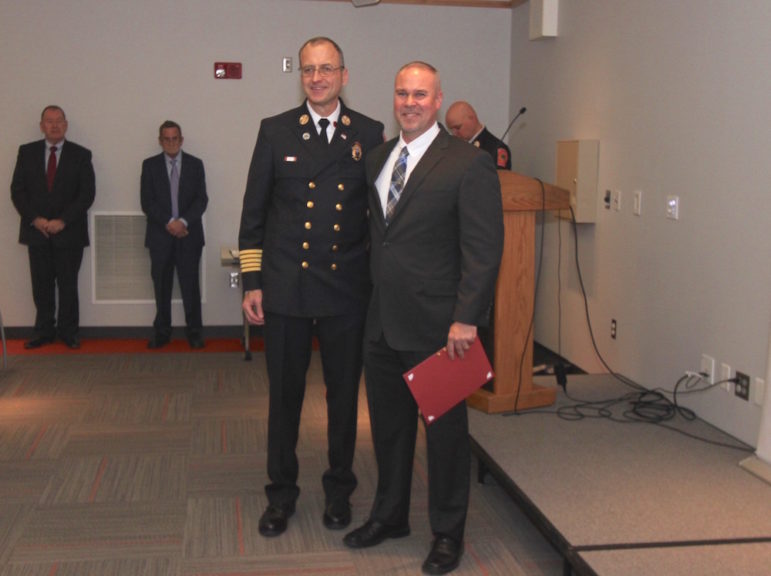 Officer Ian Taylor of the Billerica Police received a Medal of Commendation for helping to save a life in Watertown from Fire Chief Bob Quinn. 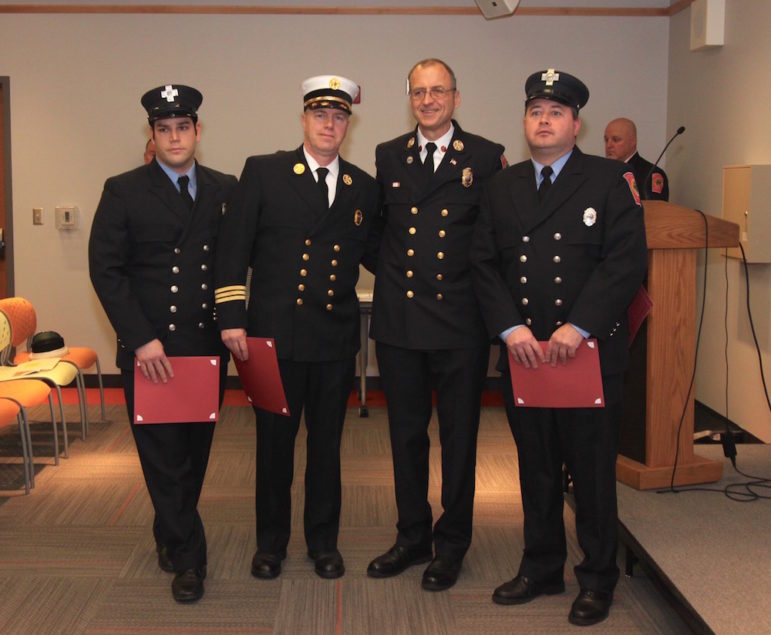 Man Saved After Having Heart Attack at Gym

On Jan. 19, 2017, a man was found lying on the ground of the locker room at Boston Sports Club on Arsenal Street, and he was unresponsive. Club employee Marcianne Andredozzi called for the defibrillator and started CPR. Club member Chris Deangelis joined and assisted giving CPR. At that time defibrillation was not advised. 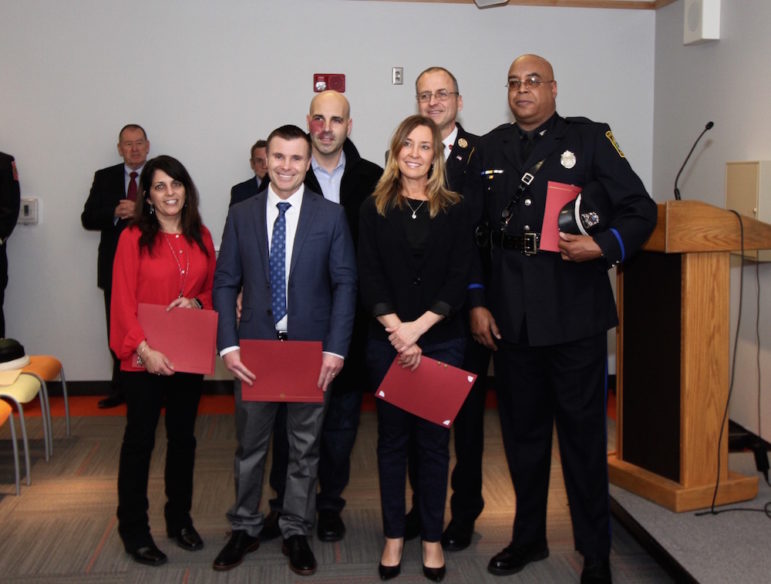 Watertown Police Officer Harold “Tony” Physic arrived and assisted with the CPR, and defibrillation shock was given. Watertown Firefighters and a crew from Armstrong Ambulance arrived a short time later and started Cardio Cerebral Resuscitation and they gave the patient high-flow oxygen and cardiac medications. They then placed the patient on the LUCAS automatic compression device and a second defibrillation was given.

“The patient regained consciousness and was transported to Mt. Auburn Hospital,” Quinn said. “He was immediately brought to the cath lab and was diagnosed with a partial or full blockage. He received treatment and was released one week later showing no signs or negative effects from the event.” 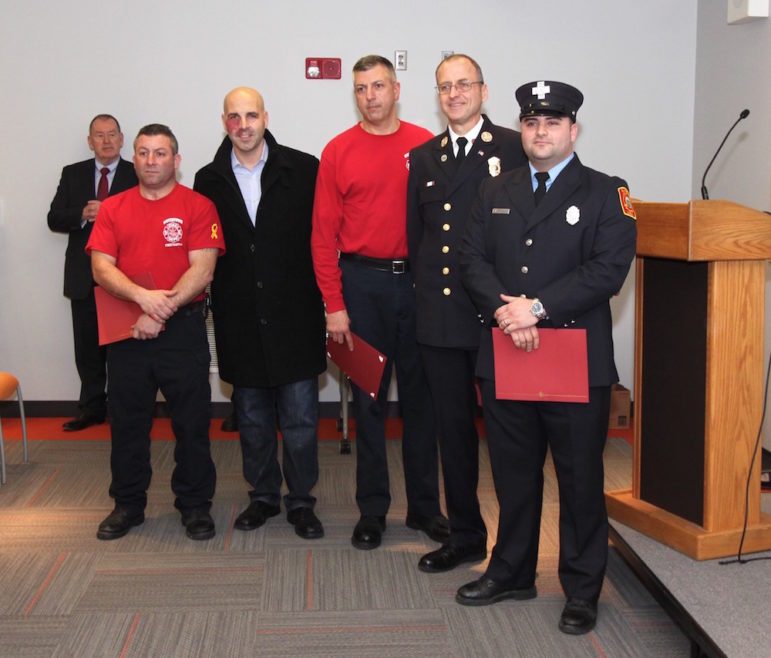 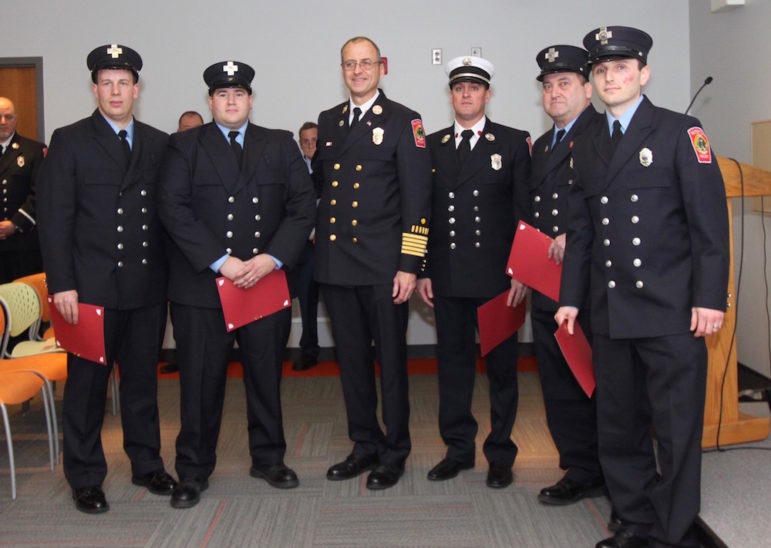 A 67-year-old man was found lying on the ground at the Armenian Cultural and Education Center with no pulse on Feb. 26, 2017.

People at the event had already started CPR when Watertown Firefighters from Engine 2 and Medic 1 arrived. They started cardio cerebral resuscitation. 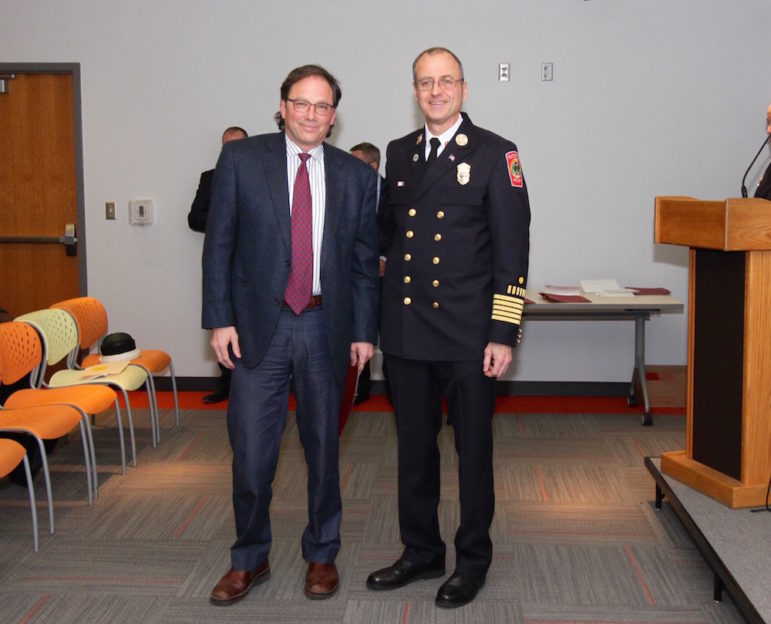 Dr. Robert Muggia, who assisted before medics arrived, was awarded a Medal of Commendation.

“Medic 1 delivered three shocks and was able to regain a pulse and the patient began breathing on his own,” Quinn said. “The patient was alert and oriented when Medic 1 arrived at the hospital.”

During the swearing in ceremony, including for 10 recent hires, Town Manager Michael Driscoll remembered the legacy of Orangio and Toscano.

Ten Watertown Firefighters were sworn in at the Awards Ceremony on Friday at the Watertown Library.

Also sworn in were 10 new firefighters and paramedics. They had their badges pinned on them by family members (Name and date of appointment).

Also, four members of the Fire Department were recognized for their longevity of services with the WFD: Chief Bob Quinn had 30 years and Deputy Chief Dan Tardif, Firefighter James Mortenson and Captain Thomas Walsh each had 20 years. 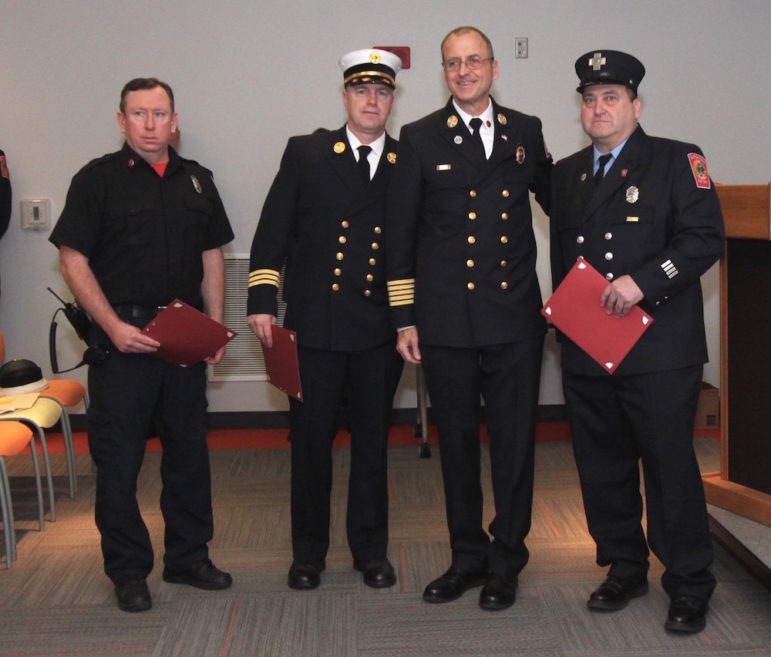 Four members of the Watertown Fire Department were honored for their years of service on the WFD, from left, Captain Thomas Walsh, Deputy Chief Dan Tardif, Chief Bob Quinn and Firefighter James Mortenson.