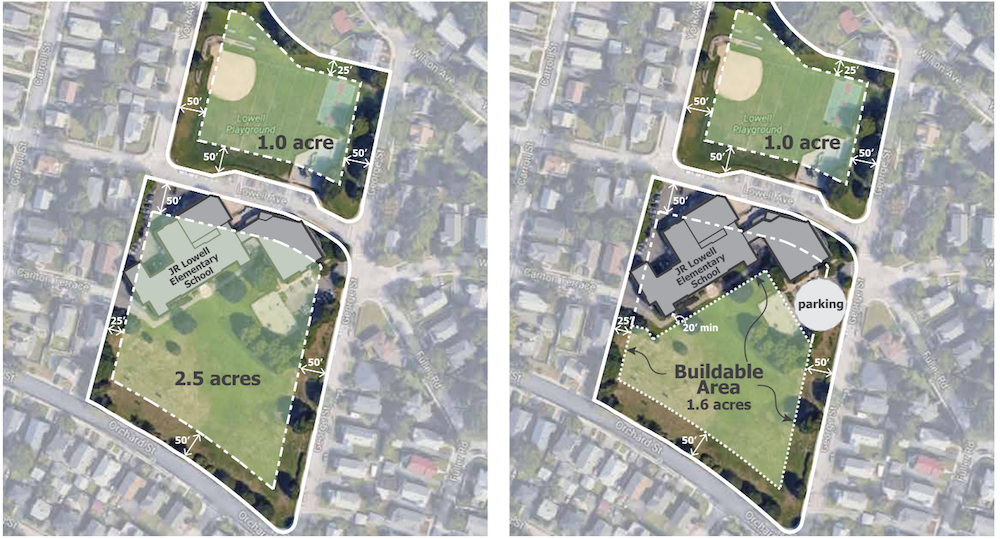 Illustrations of the Lowell School site, showing the parcels with the school on the bottom and the park on the top. The required setbacks are shown in darker green. 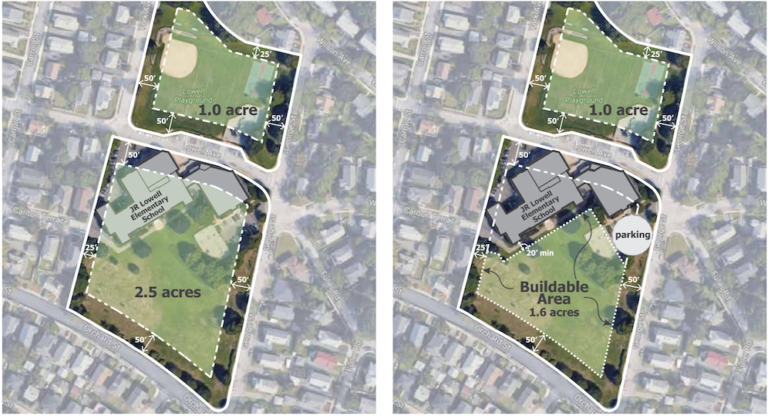 Illustrations of the Lowell School site, showing the parcels with the school on the bottom and the park on the top. The required setbacks are shown in darker green.

The Lowell Elementary School site will be removed from the table as a possible location for a new high school with a vote taken by the School Committee on Monday during a special meeting to discuss issues impacting upcoming school building projects.

The School Committee also looked at the enrollment which the new schools will be able to accommodate after the three elementary schools are rebuilt or renovated.

“The question (Monday) is not whether to site the high school there, but is it a viable site for the high school,” Portz said. School officials will have to present the state with all the potential sites in town for a high school, including the current one.

Architect Scott Dunlap of Ai3 looked at the Lowell site and said it has a number of drawbacks.

“The site would appear attractive with an open lawn in front of it and behind it the park area (and playground),” Dunlap said. “The property with the school on it is 4.1 acres and the playground parcel is 2.1 acres. For any school that is relatively small and for a large school it is a very small site.”

The properties are also surrounded by residential neighborhoods, and a high school would bring a lot of traffic to the area, Dunlap said.

An illustration of the slope of the Lowell School site.

In addition, the site slopes significantly. The front parcel had a rise of about 30 feet from the street to the back of the school, and the park area rises another 10 feet, Dunlap said. He said a school could be built on such a site, but he said it would not work well.

“Generally we avoid building a school on a sloped area,” Dunlap said. “It would have to be spread across the entire slope and would end up with a building with a lot of level changes.”

Dunlap added that Lowell is a “quintessential New England school house on a hill” which many communities would like to have.

Parents and community members who took part in the School Facilities Master Plan process in 2016 said they thought Lowell was not being considered a good place for the high school and wondered why they were discussing it again.

Superintendent Dede Galdston said that she believes the school building is in good shape and has good bones and she would not want to see it razed.

Town Council President Mark Sideris, who also sits on the School Committee, said he believes there was little to consider.

“It is pretty simple for the School Committee to make up its mind,” Sideris said. “There are so many elements that are not working as a high school site. I think we should eliminate this.”

Other School Committee members agreed, and voted unanimously to recommend the Lowell site no longer be considered as a site for the high school. The School Committee will make an official vote at its Feb. 5 meeting.

As they begin planning for renovating the three elementary schools – Lowell, Cunniff and Hosmer – the School Committee must decide how big each campus should be and the maximum capacity of each.

“(Over the next decade) there is pretty much no growth, if not a small decrease,” Galdston said.

The projections include the number of births, as well as newly permitted housing. While several hundred apartments have been built, or are going up, Galdston said the projections do not anticipate large numbers of students from these new developments.

“The projection is 37 students based on new developments,” Galdston said. “Many (of the new units) are studios, one-bedrooms or two-bedrooms.”

Galdston noted that Watertown has a pretty high percentage of children who attend private independent or parochial schools instead of the Watertown Public Schools. The estimate is 12.5 percent of elementary school age children in town attend a private or parochial school, and 353 students total in the K-12.

Parents wondered if the enrollment projections are accurate, noting that new housing is not the only factor. Some said that they moved into homes which had been owned by elderly people who did not have children in the schools anymore and they see other young children in their area.

Town Councilor Michael Dattoli wondered if the new schools would not only bring students back from private schools, but even encourage families to move into town so their children can go to the new schools.

Galdston said that she has heard of communities that saw students moving into town because of a new school, but she believes the recommended enrollment capacity would be able to handle it.

The recommendation is to build extra room into the schools.

Dunlap said currently the three elementary schools have a total capacity of 1,256, but the proposed capacity of the new ones would be 1,315. The sizes of each school would be adjusted, but not increased in all cases.

The current enrollment capacity of Cunniff is 289, and the proposed new one is 345. Lowell currently can handle 403 students, and the proposal is to have up to 520. Hosmer, the largest elementary school in town, has a capacity of 564 and the recommendation is to reduce the maximum to 520.

School Committee member Lindsay Mosca said she is excited about the opportunity to make the elementary schools more equal in size.

“A school with 300 students compared to one with 600 is a different experience,” Mosca said.

Having the Hosmer and the Lowell close in size would make it easier to provide similar programs and staffing, Galdston said.

Shifting the sizes of the schools would mean adjusting the enrollment areas.

“It is a few years out and we would have a few options to look at,” Galdston said.

Students attending a school would be able to continue in that school even if their area changes attendance areas, Galdston said. One option for redrawing attendance areas would be to create a buffer zone where students can have flexibility of which school to attend.

She also noted that students living south of the Charles River currently go to Hosmer, but it may make sense to move them to another school.

School Committee Weighing Whether to Have Centralized PreK, Preschool Program

2 thoughts on “Lowell School Site Will Not Be Used for High School, Future Enrollments Discussed”