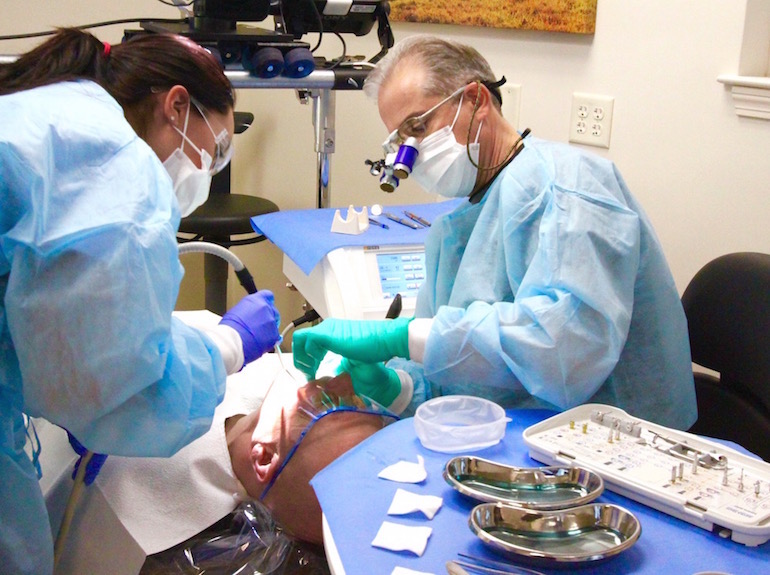 Dentist Dan D'Amico did a live demonstration from his Watertown office of placing an implant with the latest technology.

Dentist Dan D’Amico did a live demonstration from his Watertown office of placing an implant with the latest technology.

Putting in a dental implant is nothing new for Watertown dentist Dan D’Amico, but on Friday he did it with cameras broadcasting his every move to a room full of dentists at a major Boston dental conference.

Most of D’Amico’s dental office on Main Street was taken over by the video crews and representatives from Dentsply Sirona, the maker of the equipment being demonstrated for about 180 attendees of the Yankee Dental Congress.

The audience heard a presentation from Dr. Tarun Agarwal in a ballroom in Boston, D’Amico prepped his patient for the procedure – putting in the implant where a new crown will be set.

D’Amico, who has been in business for more than 25 years, had given presentations at the Yankee Dental Congress about the technology before, but he had never done a live demo. He has used the technology for about 4 or 5 years.

He uses of Cone Beam X-ray to make a 3-D image of the patient’s teeth and jawbone, and then an intra oral scanner to find where to place the implant.

“Only 10-15 percent of dentists have both technologies,” D’Amico said. “We were an early integrator.” 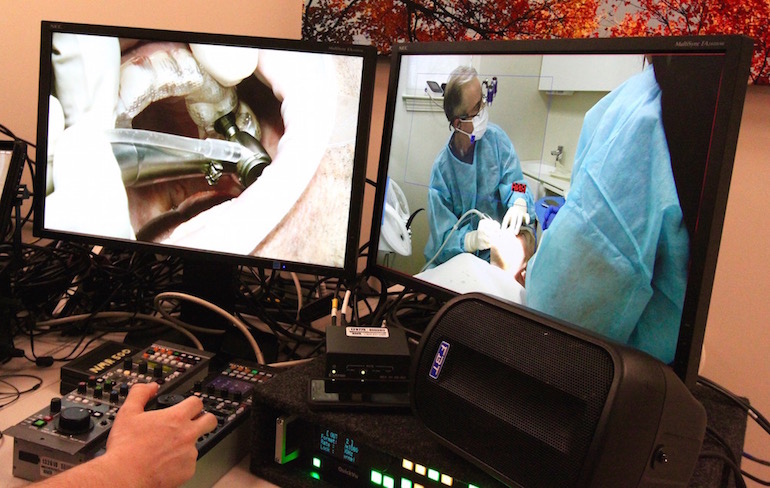 The director’s board shows the views of two cameras as Watertown dentist Dan D’Amico places an implant in a patient to demonstrate the process for a dental conference in Boston.

D’Amico said the technology has been around for many years, but in recent years Dentsply Sirona has created a software system that makes it much simpler for dentists to use. It has an interface similar to a Mac or Windows system.

“I used to send all my implants out,” D’Amico said. “Once I got the technology I started going my implants.”

The new technology allows it to go in with less than an hour in the chair.

“Traditionally the dentist eyeballs where to put the implant, starts drilling, takes and X-ray to see how it is going, and then does more drilling,” D’Amico said.

The new technology removes the eyeballing. A guide is made in Germany after an initial visit by the patient, during which a 3-D image of the mouth is made and a location for the implant is selected. The guide fits like a mouthguard, with a hole just big enough to put the drill. 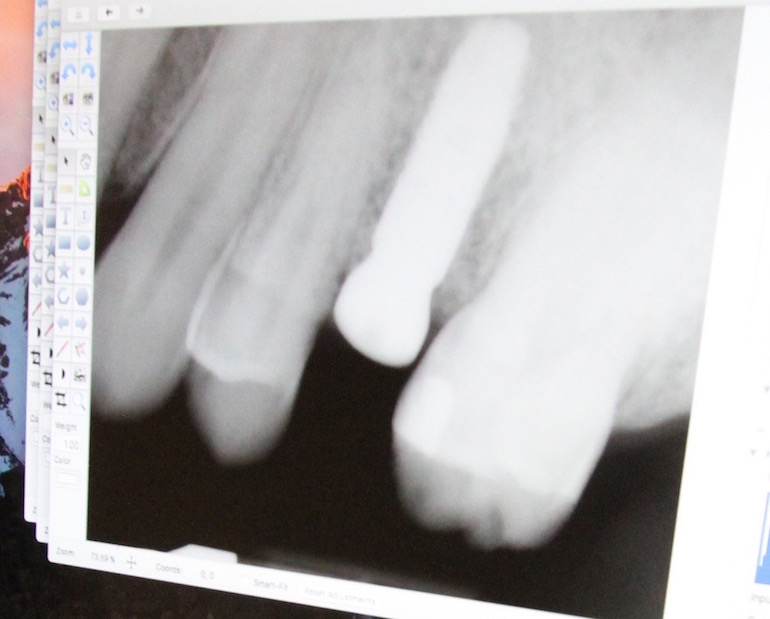 On Friday, D’Amico got there about 11 a.m. to help the video crew set up. The patient arrived just before 2 p.m. and the demonstration was supposed to start at 2:45 p.m.

The sound from Dr. Aarwal in Boston could be heard by D’Amico and the camera crew. After a few minutes, it was showtime. D’Amico drilled the hole using the guide, and then he used a special drill and a tiny wrench to put in the implant.

The whole demonstration was over in less than half an hour.

“We thought we had an hour but we really had 15-20 minutes to place the implant,” D’Amico said.

Ultimately, time was not a big factor. D’Amico usually takes about that long to place an implant, but he usually does not have so many people watching over his shoulder.

“It’s nerve wracking to have a moderator in my ear – trying to listen to him while working,” D’Amico said. “Ultimately the patient’s needs is the priority, and making sure we do good for the patient.”

The implant went in with time to spare, and D’Amico had a few minutes to answer the questions of people at the conference.