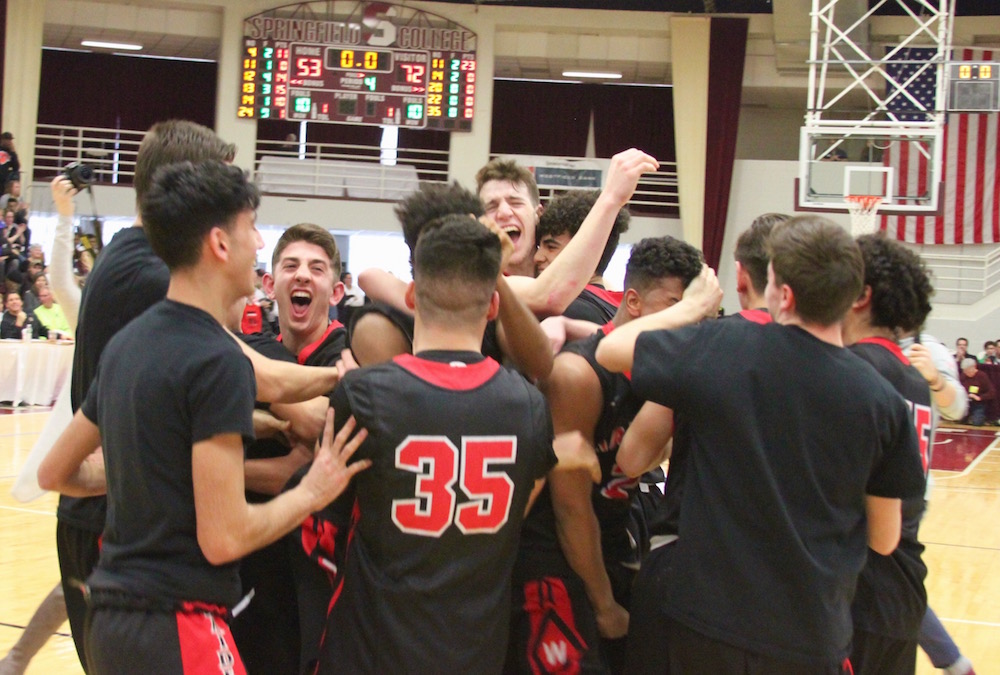 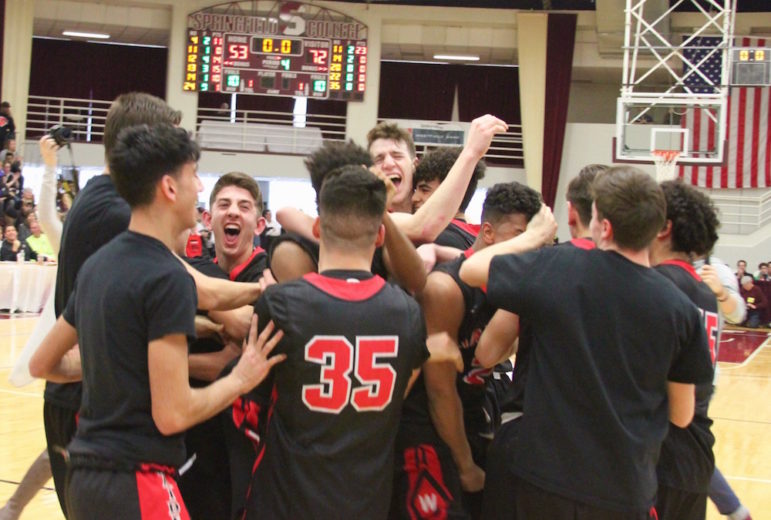 SPRINGFIELD – The Watertown High School boys basketball team raced to a 9-2 lead over Easthampton on  Saturday afternoon and never looked back. Lead by seniors John Korte and Julio Fulcar, the Raiders won the MIAA Div. 3 State Final 72-53 and headed home clutching the trophy.

The game at Springfield College was billed as a match up of teams with swarming defense who like to run on offense. Unlike the previous two games, when Watertown had slow starts, the team hit early baskets and made stops on the defensive end.

“We got some stops but we also made some shots – we finished things,” said Watertown Head Coach Steve Harrington said. “Julio made some shot, and John hit a three – and Yoseph (Hamad) hit a couple (threes) – and we separated. All of the sudden you look up and you have a double digit lead and eventually it was 20 in the first half.” 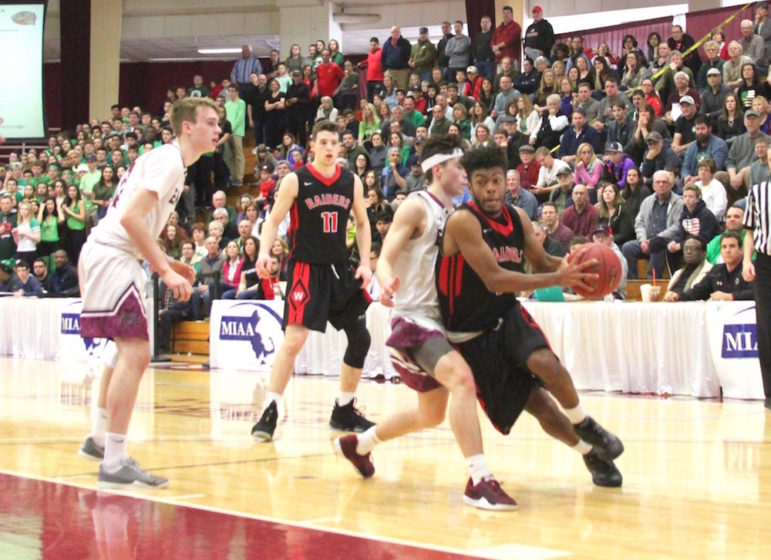 Fulcar and Korte traded off dominant quarters, with Fulcar – a guard – scoring nine points in the first quarter, and the team’s center, Korte, putting up 13 in the second frame. Fulcar added seven in the third and Korte closed the game with six points in the final quarter.

In the end, Fulcar’s 25 points was one higher than Korte’s total. Harrington credited the two captains for their leadership this year.

“John out there is a quiet leader, and Julio is our vocal leader,” Harrington said. “They are very good friends. The fact that they coexist together and run the team together, I couldn’t ask for better leadership. That’s import for the team.” 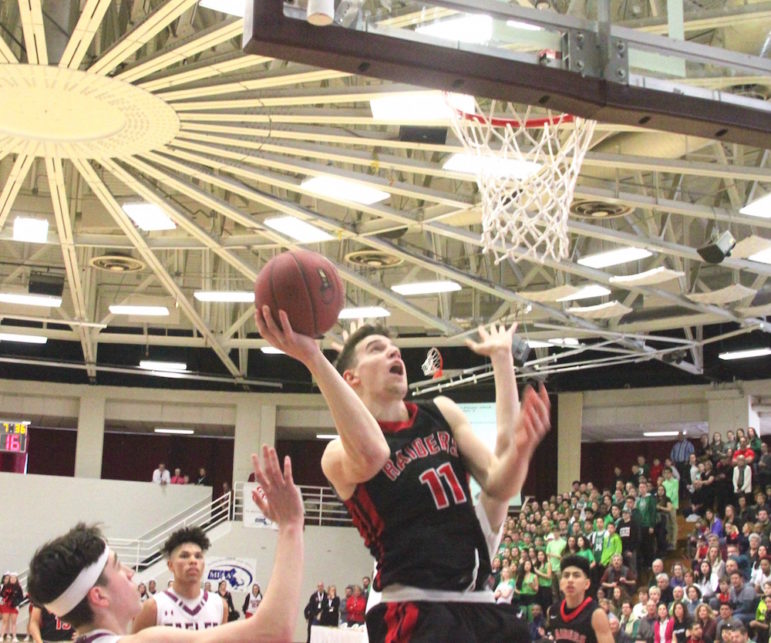 Watertown senior center John Korte goes up for a layup in the State Final victory over Easthampton in Springfield.

While they accounted for more than two-thirds of Watertown’s total, Raiders’ Head Coach Steve Harrington said other members of the team made big contributions.

The Eagles got within 13 points early in the fourth quarter, but Harrington said Hamad’s rebounds were key to stopping the Eagles’ comeback attempt.

“It was huge. It also took time off the clock,” Harrington said. “I was still worried. (Easthampton) scores fast. Even though (the lead) was 16, 18 points, this team could come back. I was worried all the time, ’til about a minute left.” 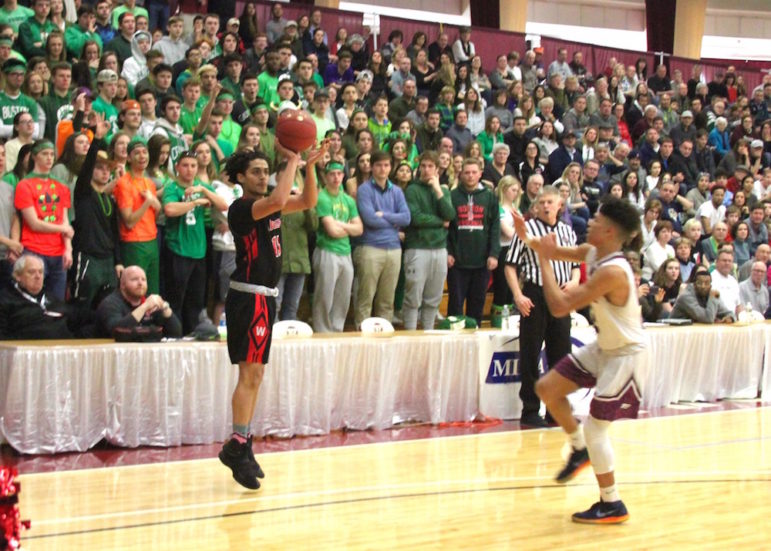 Watertown junior forward Yoseph Hamad hit two three pointers against Easthampton in the State Final. He also had big rebounds down the stretch.

One year after losing in the State Semifinals, Watertown High School celebrated at State Title – the school’s third. Harrington also won State Championships in 2007 and 2009.

Fulcar praised Watertown’s student section, which once again came out in force on Saturday.

“I can’t say enough about our fans. I really can’t. I don’t think they understand how much they mean to us,” Fulcar said. “We might be down or something, but you hear the ‘Let’s Go Raiders’ chant in back of you and you know who you are playing for. It genuinely, genuinely means a lot for us.”

Celebrating the state final win was better than Korte could imagine. 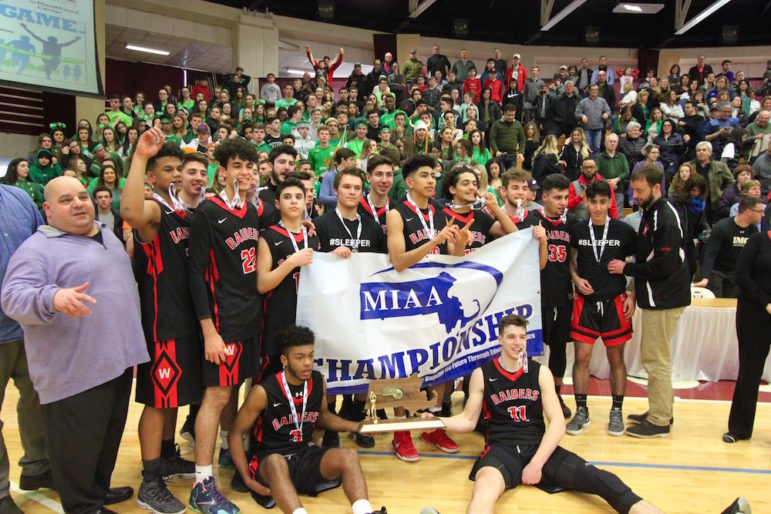