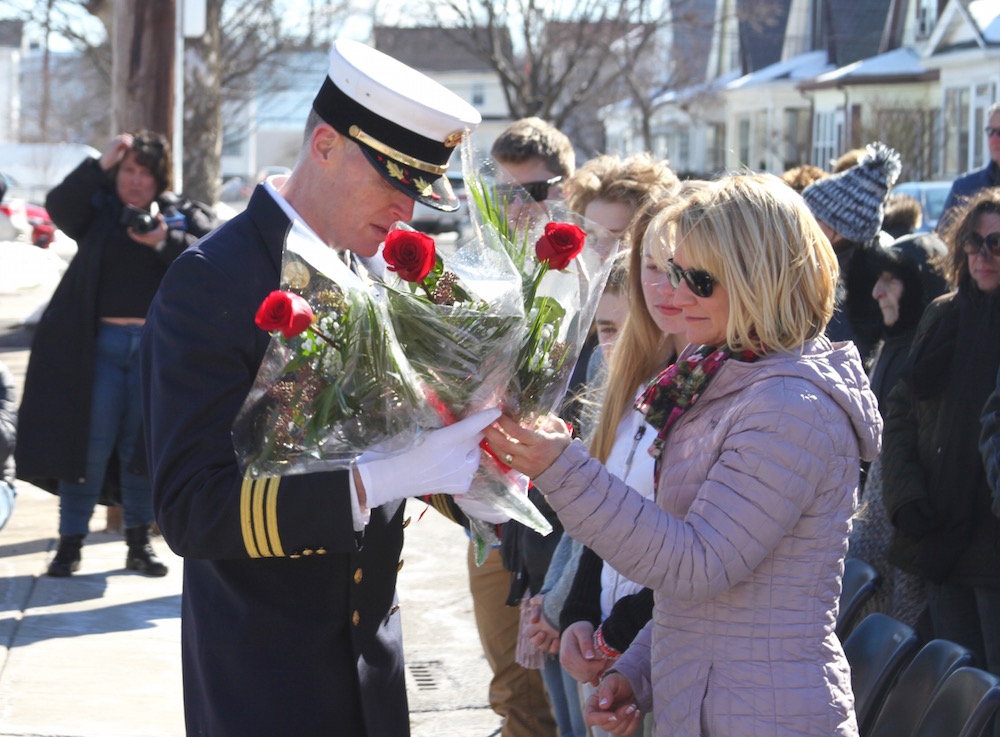 Maureen Toscano receives flowers from Watertown Deputy Fire Chief Tom McManus during the dedication of a memorial to her husband, Joe, who died fighting a fire a year ago. 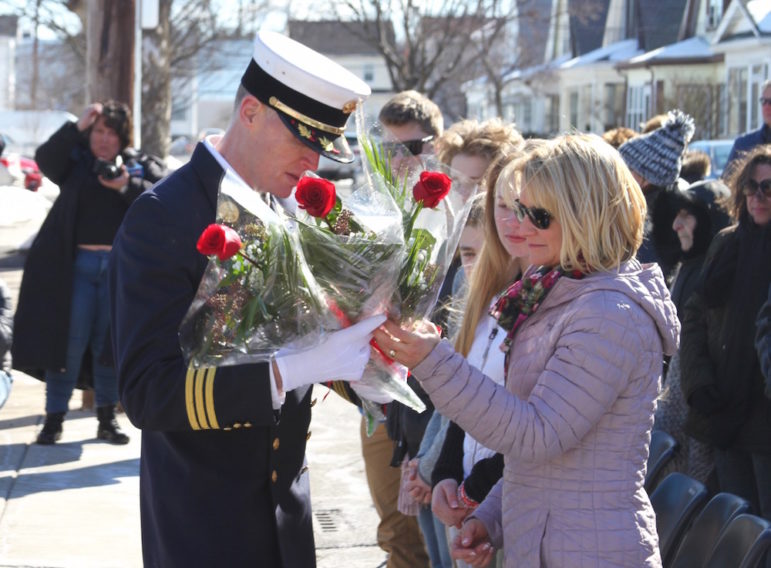 Maureen Toscano receives flowers from Watertown Deputy Fire Chief Tom McManus during the dedication of a memorial to her husband, Joe, who died fighting a fire a year ago.

The corner of Merrifield and Bigelow avenues in East Watertown was the site of a tragedy a year ago, but on Saturday it was a place where family, friends and fellow firefighters came to celebrate the memory of Joseph Toscano.

A memorial was unveiled at that corner to honor Toscano, who died in the line of duty while fighting a fire at a home on Merrifield Avenue on March 17, 2017.

Joe’s widow, Maureen, said that all this would have been strange for Toscano.

“Joe was laid back and a pretty humble guy and wold be uncomfortable with the recognition he has been receiving. However, we are certain Joe would be deeply touched to have his name on this corner here in Watertown where Joe and I first met 27 years ago,” Maureen said while fighting back the tears. 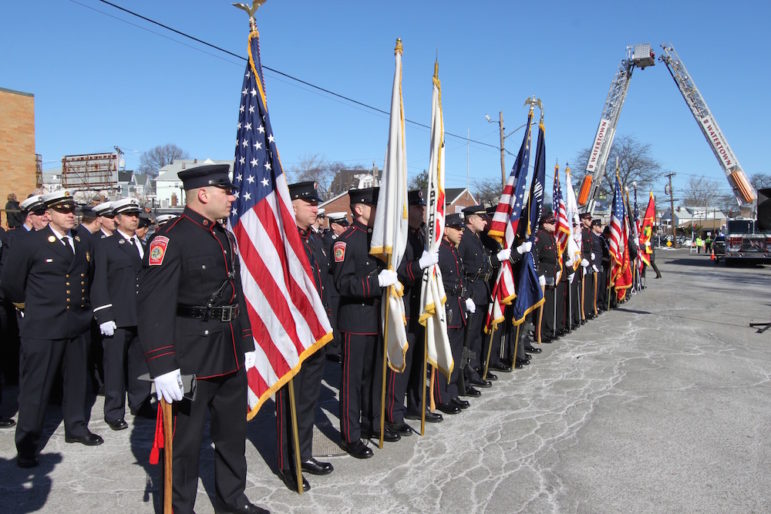 Honor Guards from the Watertown Fire and Police departments and other fire departments came out to honor fallen firefighter Joseph Toscano on the day of the dedication of his memorial.

Provisional Fire Chief Bob Quinn said that he is glad to see the memorial go up so the Fire Department and the whole community can remember a great public servant and the sacrifice he made for the community.

“Coming by this area over the past year has been difficult for me personally and for many others on the Department,” Quinn said. “Seeing this memorial here now as I come by will make me feel good because I will see the memorial and feel Joe is here looking at me and giving me the strength and courage I need to be the best I can be. That will make me smile.”

The memorial is a simple red sign, with a white inscription saying “Firefighter Joseph A. Toscano Square, Died in the Line of Duty March 17, 2017.” 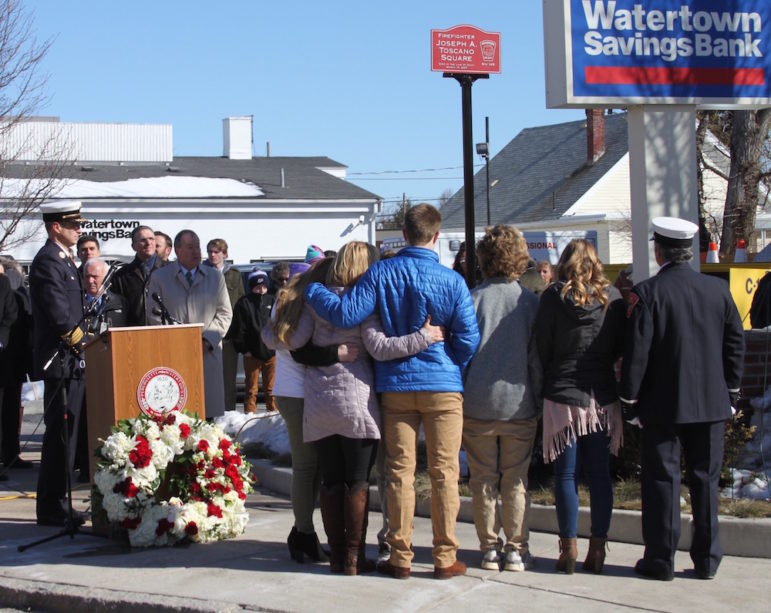 The Toscano Family, joined by Watertown Fire Lt. John Baccari, look at the memorial to their husband and father, Joe, during the dedication ceremony.

Town Council President Mark Sideris said the memorial honors a firefighter who gave his life for the community, and was dedicated to his family, his fellow firefighters and to charitable causes.

“He worked very hard. He did so many great things and he died in the line of duty,” Sideris said. “This is an honor that doesn’t go far enough to thank the family for the sacrifices that they are now making – that we do not have Mr. Joseph Toscano around anymore.”

Marueen said the Fire Department, the people of Watertown have been a great comfort for her and her five children – Alyssa, Patrick, Mary Cate, William and Michael. She has also looked to her faith in her time loss.

“We’re doing OK. We have gotten all this amazing support. it is just overwhelming,” Maureen said. “People are reaching out everyday. I get a text, a call. My faith in God has really helped us get through it.” 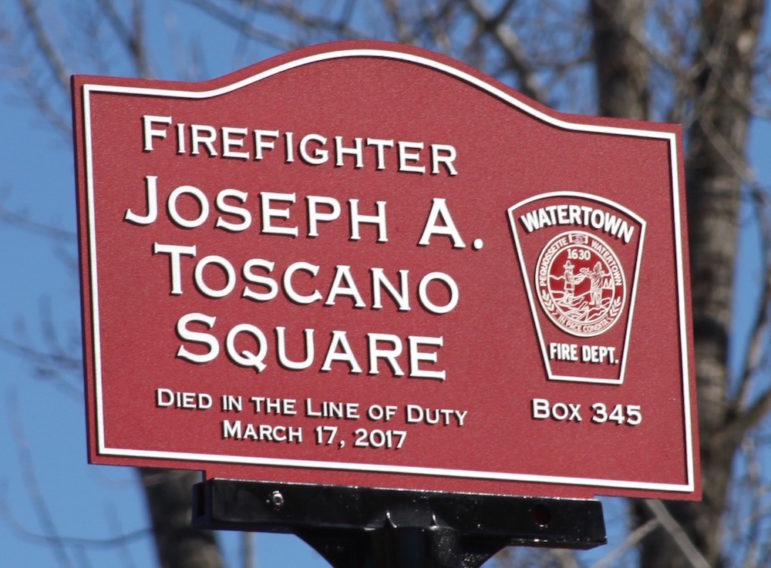 The sign erected in honor of fallen Watertown Firefighter Joseph Toscano at the corner of Merrifield Avenue and Bigelow Avenue in East Watertown.

Following the dedication, a reception was held at the Taxiarchae Greek Orthodox Church. Despite being St. Patrick’s Day the catering featured Italian favorites. Toscano was the cook for the Fire Department, but did not like corned beef so he had planned to prepare Italian dishes on the day he lost his life.

The memorial and the cost of the reception were covered by Watertown Savings Bank and the flowers were provided by Stop & Shop and Cass the Florist, Quinn said.