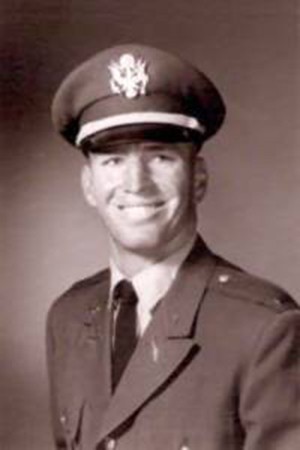 Lt. Paul Sullivan of Watertown, killed in Vietnam in 1968, will be remembered during the 50th Annual Scholarship Awards in June.

Lt. Paul Sullivan of Watertown, killed in Vietnam in 1968, will be remembered during the 50th Annual Scholarship Awards in June.

Fifty years after his death, Paul Sullivan continues to inspire the youth of Watertown and surrounding communities, and his legacy lives on in the recipients of the scholarship that bears his name.

On June 23, 2018, a banquet will be held to honor the winners of the 50th Annual Lt. Paul J. Sullivan Scholarship and several other scholarships that have grown out of the effort to commemorate the 24-year-old from Watertown, who was killed in Vietnam on Aug. 9, 1968. The day after the banquet, a plaque will be unveiled at the playground named after Sullivan on the corner of Mt. Auburn Street and Arlington Street.

Sullivan joined the U.S. Army in 1968 and trained to become a Ranger. He volunteered to join, recalled his brother Tom Sullivan and sister Eleanor (Sullivan) Donato, recently.

“He didn’t have to go,” said Donato, who recently retired from teaching at Watertown Middle School. “He was teaching at the West Junior High — now the Middle School. He subbed in math. Also, he was (baseball) coach at Sacred Heart School and St. Patrick’s School.”

While Paul wanted to continue working in education, he put that on hold to join the military, Tom said.

“He wanted to become a school counselor, and he said, how could he counsel kids if he didn’t do his part,” said Sullivan, who used to be Watertown’s Recreation Director.

Paul always enjoyed working with kids. He taught CCD in his church, coached in the CYO (Catholic Youth Organization) and worked for four years as a playground instructor for the Watertown Recreation Department at the former East Junior High School (now the Brigham House, next to Hosmer School).

“It was half a mile to East Junior High School (from our house). He would walk there and by the time he got to the playground 10 to 15 people were following him,” Donato said. “People would see him coming down the street and they would send their kids out.”

After high school, Sullivan attended Boston College, where he was a member of the baseball squad.

One of his teammates remembered how he would Paul would always get players to come with him to noon Mass everyday at BC, Tom recalled.

Sullivan trained at Fort Benning, Georgia, and when he was there he was invited to stay and run the athletic programs at the base.

“He said ‘no,'” Donato said. “If the others were being deployed he wanted to go with them.”

Donato has a number of large notebooks filled with items her mother collected about Paul: clippings from when he played basketball and baseball at St. Mary’s High School (in Waltham), from his time at Boston College, and other memories. One of the books includes snapshots taken in June 1968, when he was back visiting his wife, Marjorie, who he married in 1967. The couple lived in Waltham. The photos were taken shortly before he started his tour of duty.

Sullivan was a First Lieutenant and an Army Ranger in the 5th Infantry, known as the Bob Cats. He died after his unit came under small-arms fire during a patrol near Dau Tieng in Bihn Duong Province, outside Saigon. Sullivan was awarded the Bronze Star, the Purple Heart and the Combat Infantry Badge.

The Sullivan’s album also contains the telegram sent by the Department of Defense informing the family of his death.

Many years after his death, members of Sullivan’s unit have contacted the family to tell about their memories of Paul, Eleanor said.

“He was only with them for four or five weeks, yet he made that kind of impact,” Donato said.

She has also heard from other people in Paul’s life.

After his death, Sullivan was memorialized in a few ways. In 1969, Watertown Town Meeting voted to name the playground next to the Coolidge School (now senior apartments), after Sullivan. That same year the first Lt. Paul J. Sullivan Scholarship was awarded.

“Shortly after Paul’s death, a group of those who knew and loved him looked to find a way to honor his memory and recognize the loss of a young man who had so much more to accomplish in the fields of teaching and coaching,” Donato wrote in the letter announcing the 50th anniversary banquet. 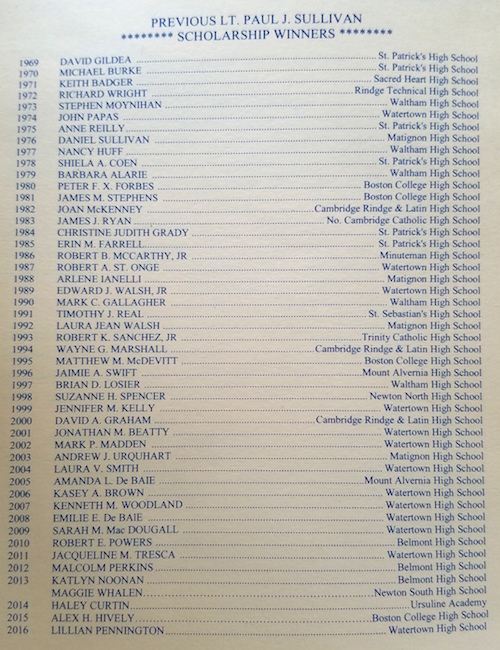 The winners of the Lt. Paul J. Sullivan Scholarship. The 2017 winner was Jensen Alvarado from Waltham High School.

The winners do not have to attend a Catholic church, Donato said, as long as they share Paul Sullivan’s passions.

“Any student athlete can apply, and they have to be involved in some sort of religion,” Donato said. “In recent years we had someone who went to the Islamic Center of Boston and someone from First Parish in Arlington.”

There have been 50 winners in 49 years, because in 2013 two people received the scholarship. Donato said her kids never got to meet their uncle, but they learned about him through the Scholarship.

“They say they feel like they know him through the winners of the Scholarship,” Donato said.

One past winner really embodied Paul’s spirit, Donato said. Ed Walsh won the scholarship in 1989. He went on to be a lieutenant in the Boston Fire Department and died along with Firefighter Michael Kennedy while fighting a fire in 2014.

“When we were standing in line for Ed Walsh’s wake we commented how much he was like our brother,” Donato said. “His temperament, his personality, and he worked at the Y.”

The amount awarded to the Scholarship winner has grown over the years. In the first year the winner, David Gildea of St. Patrick’s High School, received $500 and three others received bonds. This year, the winner will receive $5,000.

Other scholarships have been added over the years. Some have been in honor of Paul’s family members and friends, and others have bequeathed money to the Scholarship fund. This year, there will be 10 awards winners. Along with the Lt. Paul J. Sullivan Award, other awards will be handed out in memory of Paul Cusick, Father Bob Sullivan, Sister Eileen Sullivan, Boston Fire Lt. Ed Walsh, Steve Finn, and Thomas Walsh, along with three 50th Anniversary Awards.

This year, all the winners will receive at least $1,500, Tom said, who added that the money handed out has added up.

“We are starting to approach half a million in scholarship awards,”  Tom said.

Money for the scholarship comes from an annual golf tournament, as well as donations.

For the first 25 years a dinner was held each year when the awards were presented, Tom said. Then the committee decided to only have a diner every five years, with receptions being held during the years in between.

Some of the banquets have been attended by some special guests.

“We were contacted by the medic in whose arms he died in, Bruce Cotta. He wasn’t the medic in Paul’s unit, but he held him,” Donato said. “We never met before. He came to the scholarship dinner the next year along with Paul’s radio man, his medic and the colonel in charge of the whole area. They were at the 35th annual event.”

What may be most unusual about the Lt. Paul J. Sullivan Scholarship is its lasting power.

“People told us it’s unusual for something like this to last 50 years,” Tom said.

Many go for a few years and fade away, or are adopted by another organization, and the memory of who the person being honored is largely lost, he added.

Donato and Sullivan have been in charge of the scholarship for the past 25 years. Prior to that Paul Cusick was in charge and now, Donato said, she hints to her children that it is time for someone else to step up.

More information about Paul Sullivan can be found here: