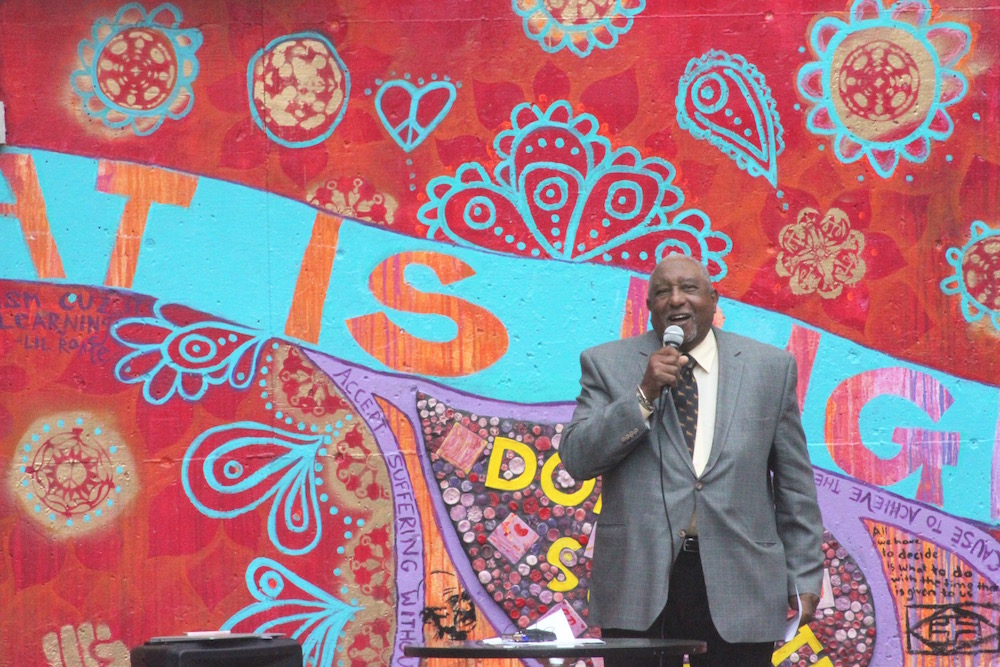 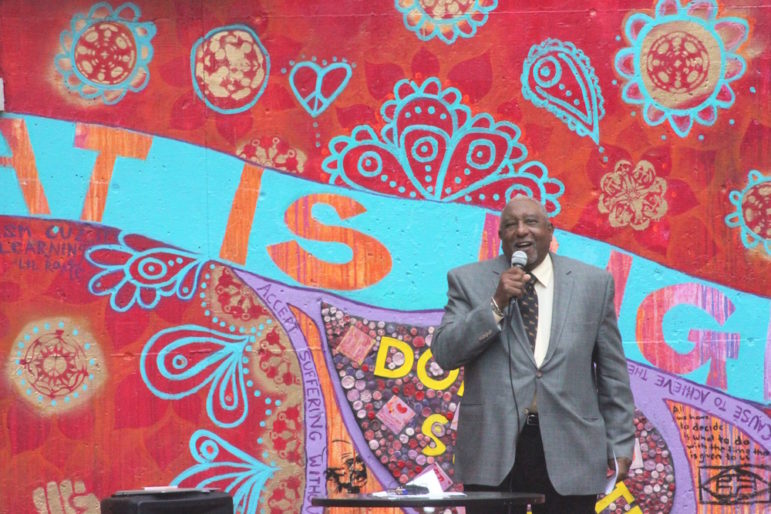 Watertown has embraced the non-violence teachings of Martin Luther King Jr. like no other community, according to a Civil Rights activist and good friend of King.

On Thursday afternoon a celebration for the dedication of the mural created on the back wall of the Watertown Boys & Girls Club was attended by Dr. Bernard Lafayette.

The mural, called “The Time is Always Right,” features bright paints and sections of mosaics which demonstrate the six principles of Kingian Nonviolence (and the words on the mural): 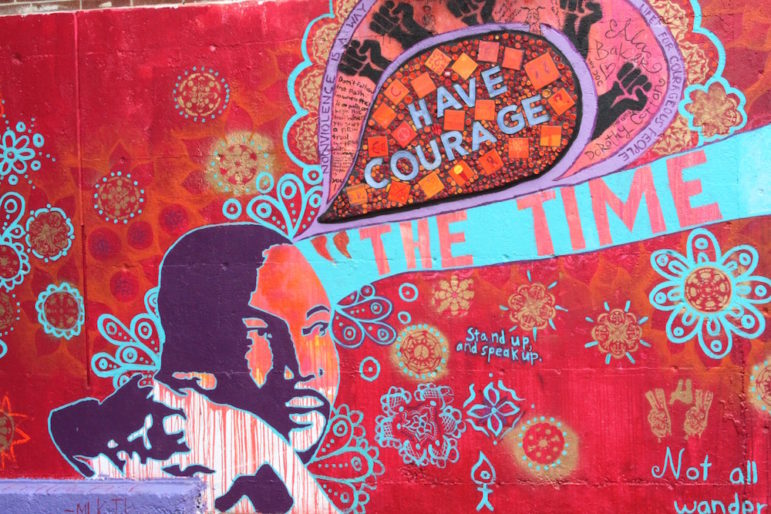 A closeup of the section of the Kingian Nonviolence Mural featuring Martin Luther King.

Lafayette knows King’s teachings well. He has dedicated his life to spreading the nonviolence movement by teaching others how to use the principles and become Kingian instructors themselves. Two years ago he came to Watertown to teach 24 students, 17 school staff and three police officers. Since then, that group has reached more than 2,500 people in different events, according to Ruth Henry, a Watertown Middle School teacher who helped bring the Kingian principles to town.

Some activties have been teaching parents and others in town, and Henry started a Kingian training course as an elective at the middle school. Next year, Henry will start a Kingian Action Course at the middle school, which will be more advanced class where students can put the principles they have learned into action on issues in which they are interested.

Even before the course, Henry worked with her students to create murals on poster boards to celebrate the Kingian Principles. These were displayed at Watertown’s annual Unity Breakfast on Martin Luther King Jr. Day.

The town also has a Kingian Nonviolence Committee, which came up with the idea of creating a large, permanent mural, Henry said. The paint for the mural was donated by Sherwin-Williams, and the tiles were created by students and others. An event was held at the Hatch Makerspace to teach them about making tiles and mosaics.

The students worked over April Vacation to turn the vision into a reality, and the final touches were put on over Memorial Day weekend. The mural overlooks the basketball court at Saltonstall Park.

After the event, Henry received hugs from students and adults who helped create the mural. Many groups helped along the way. 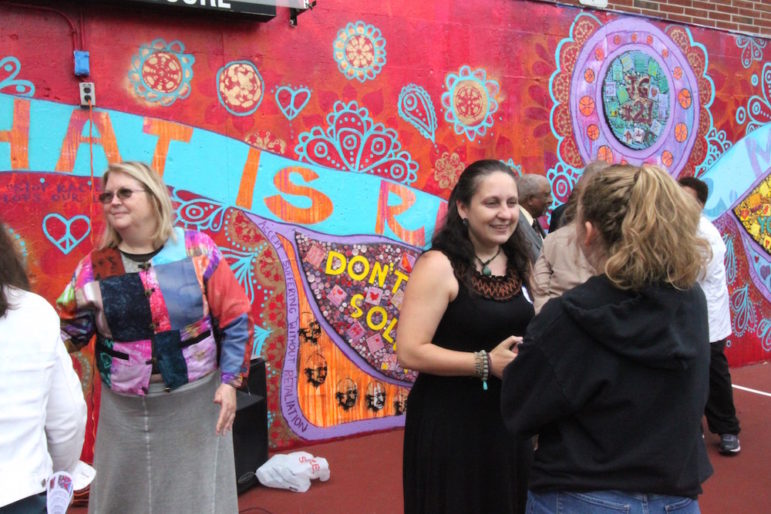 During Thursday’s celebration, middle school students spoke about the mural and the Kingian Principles. Some of the students and others who helped create the mural became emotional when speaking about what the mural.

Ingrid Joy Wolfson said that growing up in South Africa under Apartheid, she would never had thought people from a wide variety of racial backgrounds and cultures could come together. A student who recently moved to Watertown from Guatemala struggled to get through her reading as she fought back tears. She said the project helped her gain confidence and make friends in her new hometown.

MLK is not the only person memorialized in the mural. One section of Mosaic reads “JG #21.” This replicates a piece of graffiti that was on the wall before the mural went up. It was put on the wall in honor of Joey Glynn, a player in the Watertown Summer Basketball League who collapsed and died from an undiagnosed heart problem while playing on the court next to the wall.

Glynn’s family attended the ceremony and his aunt Mary Glynn thanked organizers for including Joey in the mural. He may not have been part of the mural, if middle school student Romeo Josey had not stepped up and told Henry what the graffiti represented.

“Having Joey’s name mentioned in the same breath as Rev. Dr. Martin Luther King is not lost on Joey’s family,” Glynn said.

She said Joey displayed many of the qualities that MLK embodied during his life. While he was prom king and captain of the basketball team, he was the kind of guy to stand up to people being bullied at school or would text you because he knew you were having a bad day.

Lafayette and his wife Kate sat quietly during the presentations. Then Lafayette, a Presbyterian minister, got up and gave a rousing address about what he has seen in Watertown.

“What you have been doing here in Watertown has never been done anywhere else,” Lafayette said. “I know.”

He worked closely with King. Lafayette helped found the Students Nonviolence Coordinating Council (SNCC), and he was with King on the evening that the Civil Rights Leader was assassinated at the Lorraine Motel in Memphis. King has just given the “Mountain Top” speech. 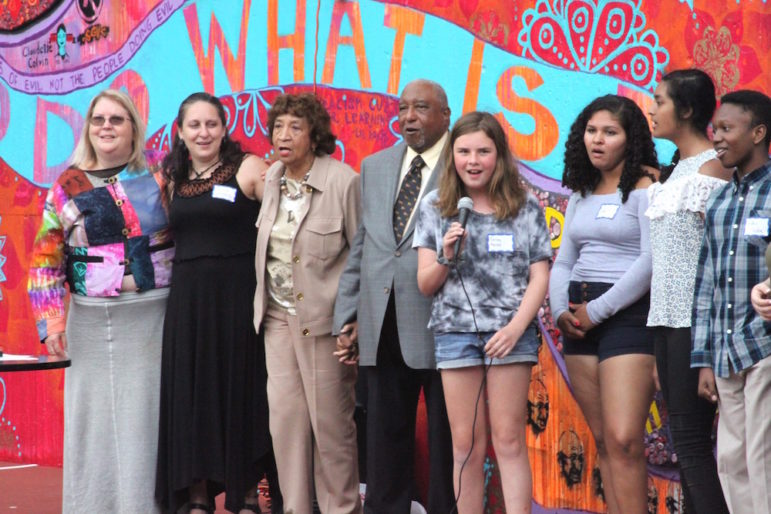 The town fits the criteria that MLK looked when looking for communities to work with during his organization of the Civil Rights Movement. One was to find a place where people are not just following the movement, but leading it.

“It’s the difference of being part of a movement and the movement being within you,” Lafayette said.

MLK also looked for communities that had a coalition, where those working on the movement also worked with other institutions in town. That was the case in Montgomery, Ala., and Chicago, Lafayette said.

The success of the Civil Rights movement, Lafayette, was not getting the support of African Americans, but to get the majority of people behind it.

The most convincing people can be the youth. Sometimes it came in the form of a tragedy, such as the deaths of four young girls in the bombing of the 16th Street Baptist Church in Birmingham, Ala. Or it can be the efforts of groups like the students from Watertown Middle School.

He spoke about how Watertown has embraced King’s teachings.

“What a wonderful community. You are the symbol of the love of community Martin Luther King talked about, what he had in mind,” Lafayette said. “All we need is one example others can see, follow and replicate.” 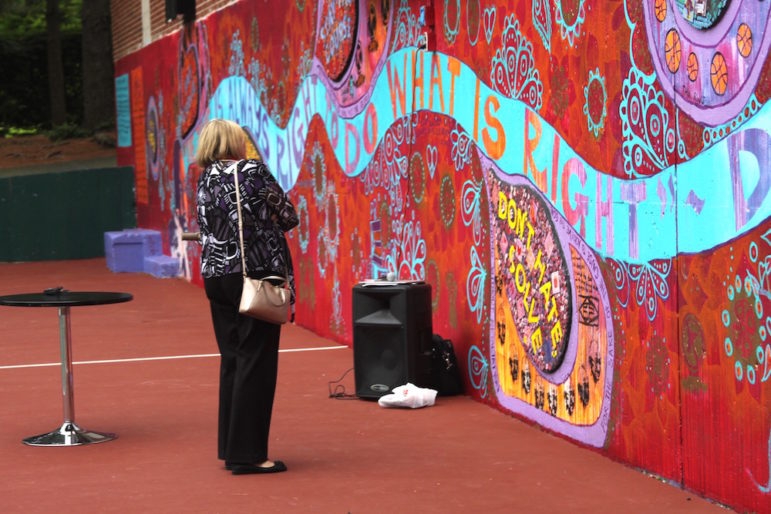 One of the attendees of the mural dedication ceremony gets a close look at the artwork.

Toward the end of his life, MLK spoke about the next moves for his nonviolence movement, Lafayette said, and King wanted to internationalize and institutionalize the movement. Watertown has done that.

“See what you have done here. You have young people from other countries and in this country,” Lafayette said. “You have internationalized and you have institutionalized nonviolence.”

2 thoughts on “MLK Friend: Watertown Embraces King’s Principles Like No Other Community”