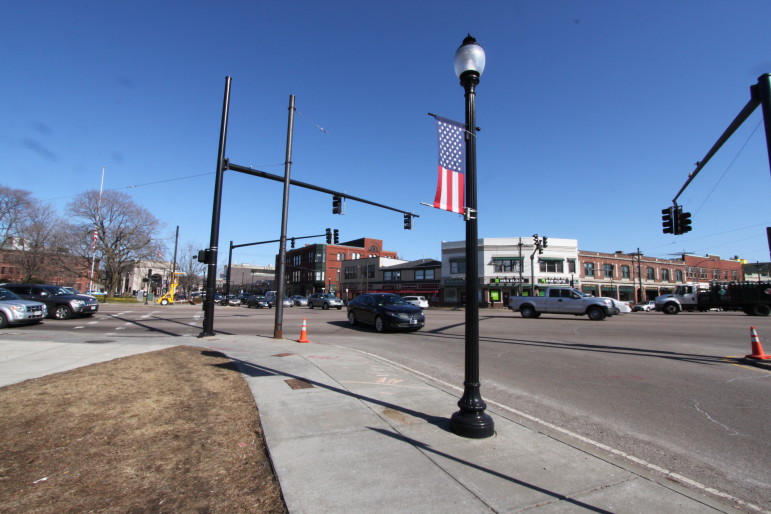 Watertown Square is one end of the shuttle route that Watertown officials hope to start, but have yet to get enough developments to join in.

Those hoping to ride a shuttle down Pleasant Street to Watertown Square, or anywhere else in town, will have to wait.

The proposed shuttle would be largely funded by private businesses and residential developments, with the Town also contributing. The Council’s Economic Development and Planning subcommittee heard from Transportation Planner Laura Wiener Tuesday night, who said that not enough organizations have committed to funding a shuttle to launch a viable pilot program.

The current plan is to run a shuttle along Pleasant Street, Wiener said, because the street does not really have any public transportation.

The estimated cost for running a shuttle for a year is $150,000, Wiener said. The Watertown Transportation Management Association (TMA) has committed $25,000, and the Town has volunteered in-kind donations of a vehicle and fuel equivalent to about $50,000. Watertown also has access to the Commonwealth Transportation Infrastructure Fund, which is paid into by transportation network companies such as Uber and Lyft. The Town has close to $50,000 in that fund, which must be spent on transportation.

Even with those sources, Assistant Town Manger Steve Magoon said that an estimated $50,000 must be provided by businesses or complexes to be served by the shuttle.

“Until we get three or four developments to commit, I don’t think it makes sense to start it,” Magoon said.

Three developments along the Pleasant Street Corridor are required by their permit to pay into a shuttle. Other developments, built before the requirement was put into place, can take part but would do so at their discretion.

“Watertown Mews has been built and is fully occupied. Two other required projects will probably not be occupied for 1.5 to 2 years,” Wiener said.

Several other major developments have been built along Pleasant Street, or nearby: Bell Watertown, Riverbend on the Charles, Riverbank Lofts, Repton Place, Riverpark Lofts, and Riverworks (formerly Aetna Mills). The Centerpoint office complex on Seyon Street in Waltham has also expressed a strong interest in joining the shuttle, Wiener said, but has not yet committed.

Efforts have been made to reach out to the developments not required to join, and a meeting was held, Wiener said, but only three attended — Riverbank Lofts, Repton Place and Centerpoint.

Magoon said that the City of Newton has expressed interest in joining the shuttle, but officials have not committed to join.

Those who attended the meeting had a number of questions, including: how much would it cost, how many stops would there be, would people not in the development be able to ride, and would people park apartment complex lots to ride the shuttle. Some said they thought there might be more interest if the shuttle connected directly to the Red Line, Wiener said.

Town officials have pushed for the shuttle to be open to the public. Magoon said that people will likely be able to buy passes so that drivers do not have to take money or make change, which could slow the shuttle.

Councilor Ken Woodland asked what could be done to speed up the start of the shuttle, or get more developments on board. Wiener said a survey will go out to the groups to find out where people work and where they want to go.

Michele Brooks a consultant from TransAction Associates hired to mange the TMA, said that officials could reach out to the developments to tell them how the shuttle could benefit them.

“They could look at, not necessarily who they have there but, who they want to bring there,” Brooks said. “Do they have limited parking? Are they recruiting in the Boston and Cambridge area and people do not have vehicles?”

Councilor Vincent Piccirilli wondered about the route, the hours of operation and how long it would take to do a run. Wiener said the shuttle would likely run from 6-10 a.m. and 3-7 p.m. on weekdays, and it would take about half an hour each way. The route would start at Centerpoint in Waltham and go to Watertown Square.

Piccirilli suggested looking at running it to the Arsenal on the Charles, where it could serve a major employment center. The area also has the 70 bus which goes to Central Square, and Athenahealth runs shuttles to the Red Line in Harvard Square.