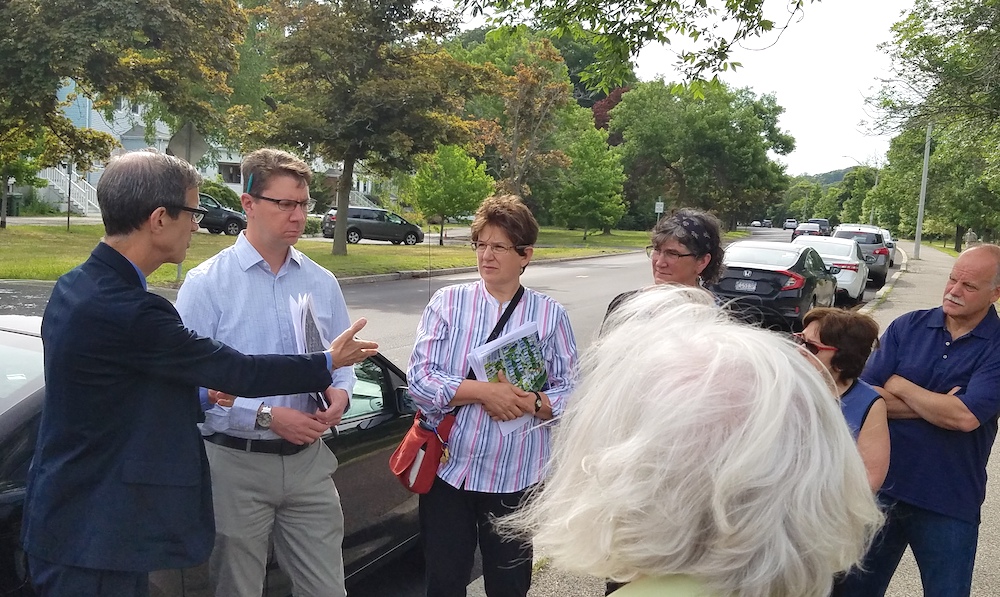 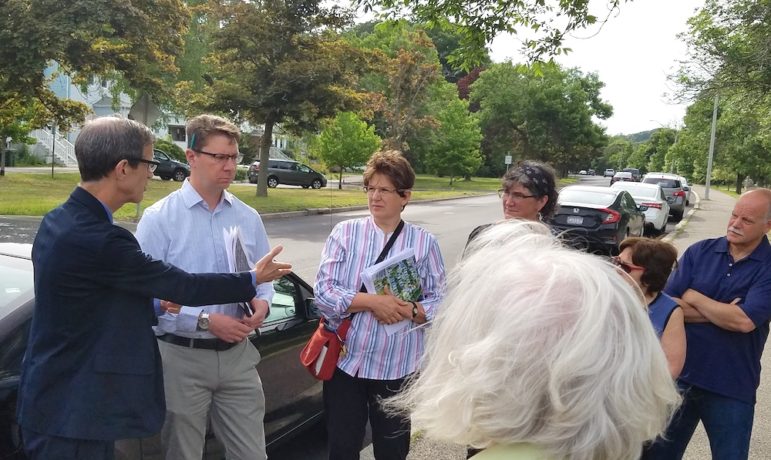 A representative from the Department of Conservation and Recreation visited Charles River Road last week to speak with neighbors about how to make the newly repaved roadway safer, including adding more crosswalks.

The tour was organized by State Sen. Will Brownsberger and State Rep. Jonathan Hecht. The goal of the re-striping is to increase the connections to between the neighborhood, the Charles River, the Riverside Park, as well as slowing traffic, said Jeffrey Parenti, Deputy Chief Engineer of the DCR’s Division of Planning and Engineering.

The no parking zone starts at the second light post on Charles River Road east of Irving Street on the eastbound side, and continues eastward for the rest of the length of the roadway, Parenti said.

Residents requested more crosswalks, particularly on the east end of the roadway, where several streets intersect Charles River Road (see the illustrations below). Parenti said the DCR would look at their ideas, but they also have other considerations.

“We do want to make sure people can be seen from both sides of the roadway, so drivers have a chance to see people and stop when someone is in the roadway,” Parenti said. “This includes the crest of hills and sometimes large trees. We want to build safe crossings at places where people want to cross.”

Walkers will be able to use either of the two walking paths along the river, Patenti said, while slower bikes — such as parents with children — could use the path along the road and faster cyclists can stay on the bike lane on the roadway.

Most of the residents on the tour were concerned about the safety on Charles River Road, both from speeding cars and with trucks using the road, which is a no truck zone.

Resident Marcia Ciro said drivers speed on the roadway, and others said since the repaving they have been passed as if they were on a two-lane road. Ciro noted there are only two 30 mph Speed Limit signs on the road (one at each end), and she asked if more signs could be posted.

Watertown Police Sgt. David Sampson said Charles River Road is one of the roads with the most traffic enforcement.

“We are out here, probably, everyday,” Sampson said.

Tractor trailer trucks sometimes use the roadway, despite the ban, residents said. As if to illustrate the point, a truck drove past during the tour. Some trucks have special permits to use the road, said Watertown Senior Planner Gideon Schreiber, such as those for the construction at athenahealth.

The work will be done in two phases, Parenti said. Phase 1 includes striping the roadways and putting in crosswalks where the wheelchair ramps already exist. This will start very soon. The second phase is selecting the new crosswalk locations and making the cuts in the sidewalk to put in new ramps. Parenti said that would likely take place in the fall.

While the tour did not cover the proposal to stop Charles River Road going into Watertown Square, many residents on the tour opposed the idea. A meeting about the Watertown Square proposal will be held on July 10. See more information here:

One thought on “Changes Coming to Charles River Road, Including New Crosswalks, Re-striping of Road”