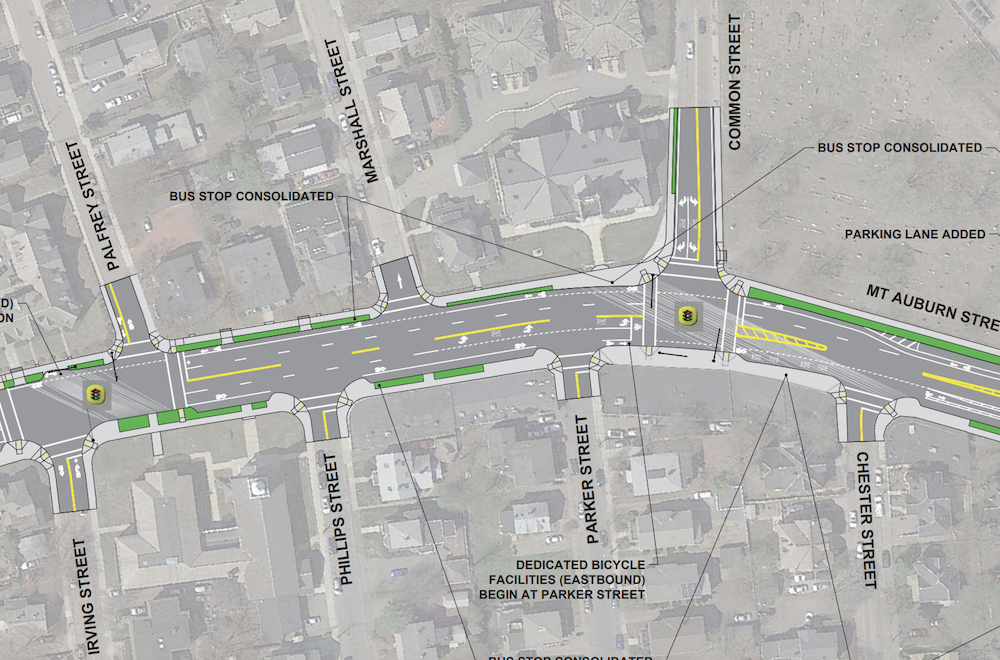 A closeup of part of the Mt. Auburn Street rendering showing the intersections of Mt. Auburn at Irving/Palfrey and Common Street where parking will be removed because it does not meet federal standards. 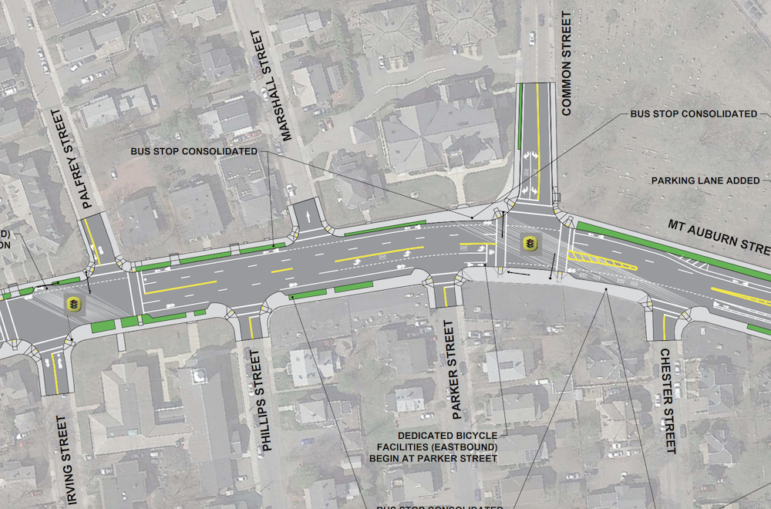 A closeup of part of the Mt. Auburn Street rendering showing the intersections of Mt. Auburn at Irving/Palfrey and Common Street where parking may be removed because it does not meet federal standards.

The renovation of Mt. Auburn Street, including the “road diet,” took a small step forward Tuesday night when the Town Council gave a preliminary nod for the first set of designs in a long process before the $14 million project becomes a reality.

The plans given a tentative OK by the Council include the Complete Streets plan to reduce the number of lanes for motor vehicles from two in each direction to one, and adding left turn lanes at many intersections, and bike lanes along the entire length from Patten Street to the Cambridge line.

Conditions were placed on the approval after Councilors received more than 80 emails over the weekend from concerned customers of Pet Haven Animal Hospital. The plan had called for removal of on-street parking in the “T” intersection on Mt. Auburn at Common Street because they do not meet state road design standards.

The businesses in the area rely on the street parking, said District B Councilor Lisa Feltner

“You can say the parking spaces shouldn’t be there in the first place, but the reality is they are there,” Feltner said.

Overall, the current plan would add 19 parking spaces from Patten Street to the Cambridge line, but not all would be in the same places. Not all of the spaces will be in business districts, either, and some in those areas may be lost. Town Engineer Matt Shuman added, however, that others will be created in key areas by moving fire hydrants.

Adding parking spots, if located across the street, would not suffice for many local businesses, said Councilor Susan Falkoff.

“There should be no such thing as a small block of businesses with no parking in front, especially with people carrying small pets,” Falkoff said.

The Council added an amendment saying the designers would not reduce the amount of parking in business districts, and keep the same number or increase the number of legal spaces. Councilors approved a second amendment to have the Public Works subcommittee review the designs and make a recommendation before the Council makes a final vote on the 25 Percent designs, which will then be sent to the Massachusetts Department of Transportation (MassDOT).

Even with the conditions it is not clear what “legal parking spots” would mean, and whether the spots in the intersection of Mt. Auburn and Common streets would qualify. Shuman said that parking in an intersection is not possible.

“MassDOT will not allow us to put parking in an intersection now matter how long we discuss it,” Shuman said.

How to determine what a legal parking spot is must still be worked out, said Assistant Town Manager and Director of Community Development and Planning Steve Magoon.

“Some details need to be worked out,” Magoon said. “For instance, people park illegally on corners. Does that make it a parking space? I’d argue not.”

Two Lanes vs. One

Some Councilors remained concerned or skeptical about whether the “road diet” would result in better traffic conditions on Mt. Auburn Street.

East End Town Councilor Angeline Kounelis noted that the Mt. Auburn Street started life as the Coolidge Square improvement project in 1999, and the plan grew and now advocates for reducing the number of lanes from two to one in each direction. She worries about whether the predictions of traffic engineers will be correct, noting that traffic has worsened in the Mt. Auburn Street/Arlington Street area despite changes made with the assurances of traffic studies.

“In my opinion, the Road Diet theory, has been overused in multiple aspects that will not create a viable vision for Watertown’s future within its parameters and dynamics.” Kounelis said. “Please don’t get me wrong. There are many fine improvements associated with the concept Project that are needed in the Mount Auburn Street Corridor. Studies and reports are working tools to embrace for discussion; with opt-out capabilities. Watertown has seen the negative results of traffic studies and engineering reports, far to often.”

She also worries about how businesses in Coolidge Square will receive deliveries with only one lane in each direction. Today, many delivery trucks park in the right lane to unload goods for nearby stores and restaurants.

Councilor Tony Palomba said, despite assurances from Town staff and from the consultants, he has a hard time picturing how a road with one lane in each direction can accommodate as the same number of cars, as least as well if not better, as a road with two lanes each way.

Shuman said that he and others in the Department of Public Works strongly believe the plan will work.

“We would not be proposing this road diet if we weren’t highly confident that it would work,” Shuman said.

There are some areas of Mt. Auburn Street, such as from Patten Street to Common Street, Shuman said. where the road diet was not recommended because the projections show it could not handle the load with just one lane. He added that the projections show the road will be able to handle not only the current traffic, but predicted traffic conditions through 2030.

Councilor Anthony Donato said he thinks the name of the design practice — Complete Streets — does not do a good job describing its intent.

“I don’t like the Complete Streets moniker. It sets up people driving cars vs. people riding bikes,” Donato said. “I think it should be called ‘Safe Streets’ because that’s what we want. Something needs to be done with Mt. Auburn Street. It is an unwieldy road.”

He added that he is concerned about how residents living on Mt. Auburn Street will be able to get out of their driveways with only one lane each direction.

Donato said he wanted to make sure that voting Tuesday night did not lock the Town into the project as it currently is designed. Sideris said the amendments mean that the project will have to come back for final approval from the Council before the 25 Percent designs are officially submitted to the MassDOT.

If the project is approved by MassDOT, the state would pay for the entire project, estimated a few years ago to cost $14 million. The Town cannot take as long as it wants to submit the project, Town staff stressed. Currently, the Mt. Auburn Street improvements are on the top of the MassDOT’s list for projects in Fiscal Year 2022. To stay on schedule, the 25 Percent plan must by submitted by December, and designers still have much work to do.

If the Town delays, the project will not necessarily get on the next year’s list, Magoon said, because the priority is determined years ahead of time.

“If we don’t go forward we will get bumped off that list,” Magoon said. “If we are bumped off there is no way to tell when we will be put back on the list. It may be years.”

Mt. Auburn Street is not in good shape, currently, Magoon said, so if they project is delayed the Town might have to do some repaving in the interim before the State funds the project.

The 25 Percent design approval process will require the review of several MassDOT departments, both in the Boston headquarters and at the regional office in Arlington, said Rich Benevento, president of WorldTech, the Town’s road design consultant. It also requires public meeting to be held in Watertown hosted by MassDOT. That is just the first step. The Town must also submit 50 Percent designs, 75 Percent designs, 100 Percent designs, and finally PS&E (plans, specifications and engineering) documents to the MassDOT for approval, Benevento said.

The Council unanimously approved Sideris’ two amendments: to keep the same number of parking spaces, and to have the Public Works subcommittee review designs and come back to the full Council for final approval.

Councilor Susan Falkoff proposed another amendment to have a citizen representative sit on the Mt. Auburn Street design team, just like the group that oversaw the U.S. Army’s decommissioning of the Watertown Arsenal. The Council was split on the idea, with some saying the person would provide a perspective not in the group now. Others said it would be hard for the person to get up to speed because project has been years in the making, and the Town staff represents the residents’ concerns. Also, scheduling meetings would be tough because there are frequent meetings, many during the day, with some at WorldTech’s office in Woburn. Falkoff ultimately withdrew her amendment.

The vote on the overall project, including the two amendments, passed 8-1, with Kounelis voting “no.”