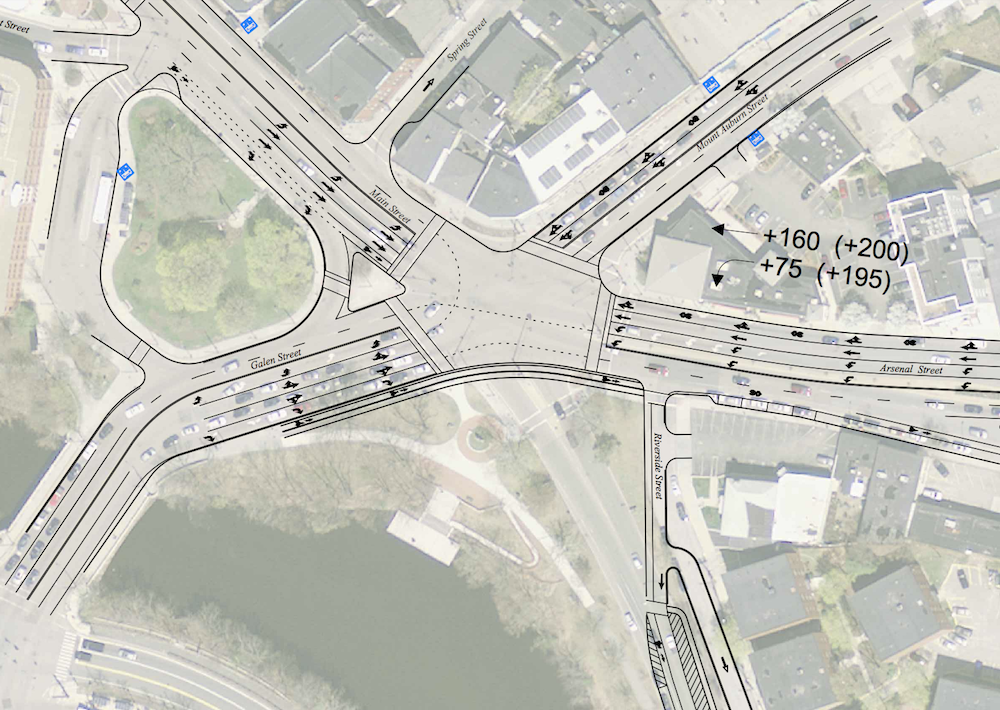 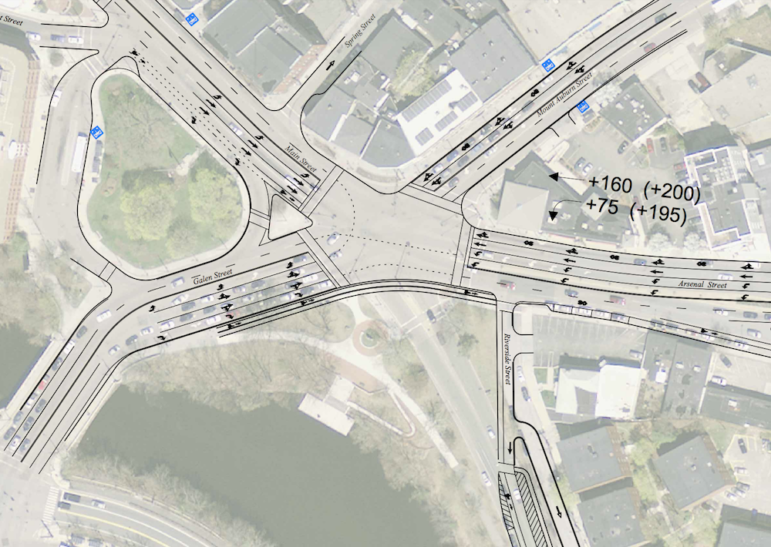 After taking traffic counts in the area around Watertown Square and along Charles River Road an North Beacon Street, the designers of the Watertown Square Improvement project added more options for how the intersection could be changed.

On July 9, the Town of Watertown held an open house to present the latest options for reconfiguring Watertown Square.

The last time the project was presented to the public, in November 2017, many residents — particularly those living between Charles River Road and North Beacon Street — opposed the idea of removing Charles River Road from the Watertown Square intersection. Representatives from the Town’s consultant on the project, VHB, said traffic counts would be done before coming back with recommendations for the project.

“Based on the traffic counts, rather than reduce the options, we added more,” said Dennis Sheehan, the DPW’s Director of Administration and Finance. “If one solution would have clearly worked best we would have presented less options.”

In November, the Department of Public Works and VHB presented four options for Watertown Square, and when they came back last week there were six options. The two new additions keep Charles River Road in the main intersection.

The goals of the project include not only improving traffic flow through Watertown Square, but also improving conditions for pedestrians, cyclists and public transportation users. Also, some options create additional open space near the Charles River.

Laura Castelli from VHB said the majority of the traffic on Charles River Road, about 300 vehicles, goes eastbound away from the Square on weekday mornings, and heads west toward the Square in the evening rush. The survey also showed that Charles River Road was slightly faster that North Beacon Street in the morning rush, and significantly faster in the evening rush, heading toward the Square. See traffic counts and maps by clicking here.

Many residents at last week’s meeting remained skeptical of the idea of removing Charles River Road. Even those who don’t live in the area say they like to have to option of that roadway.

See some of the differences of the six options below: 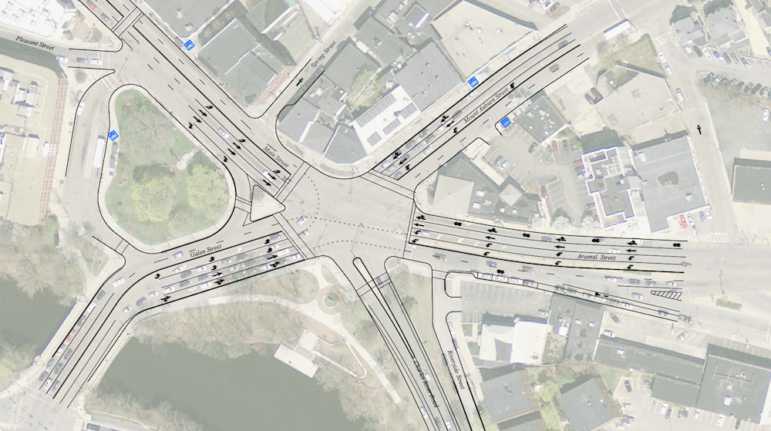 A diagram of Option 6 for the Watertown Square redesign. This option essentially keeps the current configuration of the Square, but adds a second left turn lane from Arsenal Street onto Galen Street.

In Options 1-4, Charles River Road would intersect with North Beacon Street just east of the Square, but there are differences in directions of the roadway. Also, Riverside Street would be linked to Charles River Road in these options.

In Options 1-4, designers estimate the delay for vehicles traveling through Watertown Square would be reduced between 15 and 40 seconds per vehicle.

For Option 5, the amount of time it takes to get through Watertown Square would increase by 15 seconds during the morning peak hour.

The time it takes to get through the Square would be reduced by 20 seconds in Option 6.

The lanes for each branch coming into Watertown Square change in some of the options. Options 1-5 would change how Galen Street comes into Watertown Square, and would help avoid having backups of cars trying to go straight from the inner left-turn lane. In this configuration, there would be a left turn only lane, with a left/straight lane next to it, then a straight/right lane and on the right side, a right-only lane.  Option 6 keeps the current configuration, with the two left-only lanes..

In order to do this, the traffic patterns would change. Currently, the left turns in facing roads go, then the straight traffic goes. To allow the new configuration, all traffic from one branch will go at once before switching to the next one.

Options 1-5 would continue the two-lane configuration of Mt. Auburn Street heading south into the square. In Option 6, a third lane is added to create a left turn lane, with a straight-only lane in the middle and a straight/right-turn lane on the right.

All six options call for having two left-turn lanes from Arsenal Street onto Galen Street. Also, all options have four lanes on Main Street heading east into the Square, with a right only heading toward Galen Street, two straight only lanes in the middle and a left turn lane on the left. 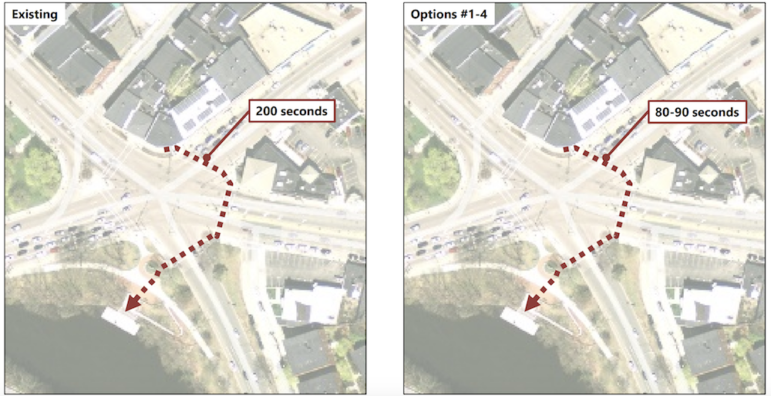 Options 1 through 4 would reduce the time it takes to legally cross Arsenal Street/North Beacon Street and Mt. Auburn Street. Currently it takes 200 seconds to get from the west side of Mt. Auburn Street to the south side of Charles River Road crossing with the walk signals.

The changes in lane configurations and removal of Charles River Road from the intersection in Options 1-4 would shorten the time waiting for “walk” signals at these intersections to 80-90 seconds.

There would be no change in the crossing times for Options 5 and 6.

In Options 1-4, the redesign could allow for bicycle lanes on some roadways leading into Watertown Square.

Options 5 and 6 only allow for bicycle accommodations on Main Street.

Options 1-4 allow for the Watertown Square bus stop for the 70 bus eastbound to be moved closer to where the 71 bus stops on the Watertown Delta.

The stop could not be moved in Options 5 and 6.

There would be no additional open space in Options 5 and 6.

See the documents and more information about the Watertown Square redesign project at the project website: https://watertownsquareimprovements.com/documents/