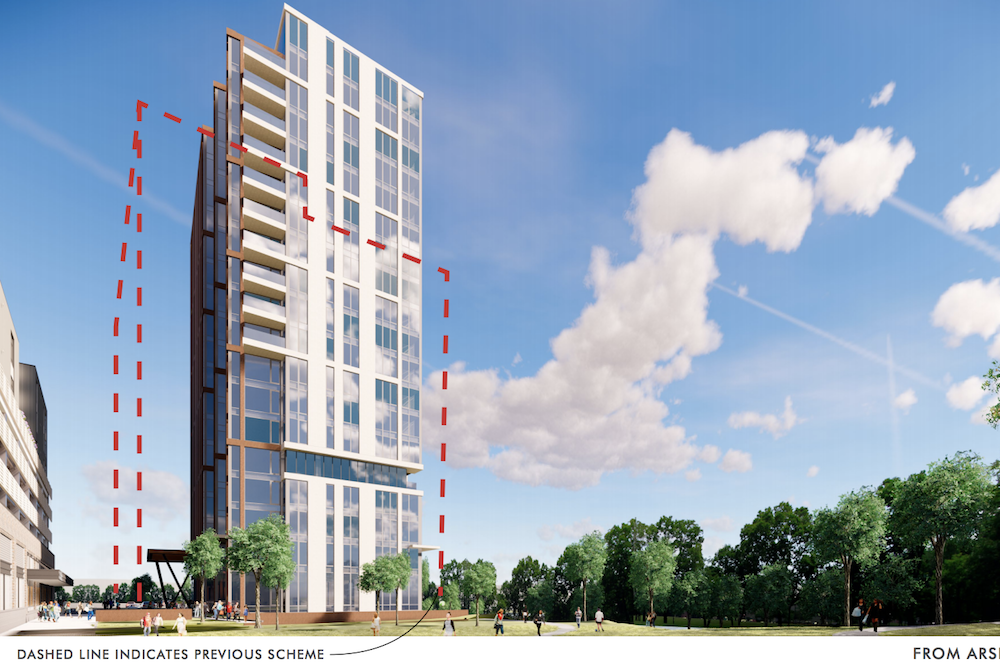 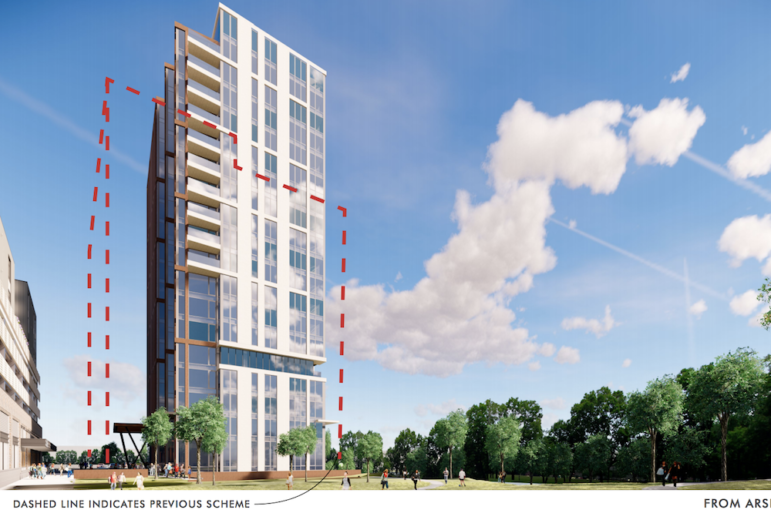 Boylston Properties (BP) is seeking a zoning change at Arsenal Yards. What the published agenda IV. 485 Arsenal Street (click here) amendment fails to disclose is that while BP is again pushing for a height increase to 197 feet at Building G, they are also asking for 80 percent of that height for any additional buildings on their site on the south side of Arsenal Street. They want to create their own separate zone within the RMUD. If approved, those buildings could go to 157.6 feet.

Miller’s Ale House could have a tower of almost 160 feet. Where else might they need some taller buildings? And what happens if they eventually buy the Home Depot site? They have tried.

Here is the closing paragraph of the new BP proposal:

The Proposed Amendment to increase the maximum building height for the first building to 197 feet by Master Plan Special Permit for parcels larger than ten (10) acres located on the south of Arsenal Street, with a maximum cap on height for any additional building therein to 80 percent of the previously approved height for the first building will further the intent and purpose of the RMUD and is not spot zoning or in violation of the uniformity requirement under M.G.L. c.40A, § 4. The Proposed Amendment will continue future development of parcels south of Arsenal Street, a Gateway Location that is a main attraction in the Town for businesses and the community. As a whole, granting the Proposed Amendment will allow greater mixed use development of retail and multi-family residential opportunities for this area. What has changed to warrant this new zoning proposal? Absolutely nothing except the desire to maximize profit. Please don’t be fooled by the words more “open space.”

Some history: In 2015 numerous meetings were held by Sustainable Watertown, the Town Council Economic Development and Planning Subcommittee, Boylston Properties, the Planning Board, and the Town Council to discuss the proposed Regional Mixed Use District (RMUD). Most of this discussion revolved around meeting BP’s needs. Citizens came out in force and issues were hotly contested.
Relationships were strained socially and politically.

A “north and south district” regarding Arsenal Street was proposed. This idea was rejected as it was deemed to be spot zoning by our town government. Questions were raised about kinds of mitigation but were never clearly answered by the town. The final mitigation was $2.059 million for traffic and $810,000 water/sewer. The affordable housing percentage was increased to 15 percent. The toughest discussions revolved BP’s push for height increases. Allowing a height up to 130 feet in this zone, instead of the 79 feet maximum height limit by Master Plan Special Permit, was negotiated after much heated discussion.

Many residents voiced their disapproval of the town’s compromise. Simply put, folks did not want Watertown to evolve into some imitation of Somerville, Cambridge, Allston or Brighton. Residents were rightfully demanding a voice in Watertown’s future identity.

What is the “public” benefit to our town? These changes only benefit Boylston Properties. A taller building will give allow for more floors of expensive condos with better views looming over Arsenal Park and the Charles River. There will be 122 condos whether the building is short or tall. The design sketches are just concepts. BP’s “problem” with the footprint of the building is their own doing given their chosen buildout of the property. They, or another developer, can change the “G” footprint. But this could reduce profits.

Also, this zoning change will allow them additional buildings at almost 160’. Again, these changes will make this part of the project more lucrative should they broker out these building sites to condo developers. Sure, there may be some incremental extra property tax dollars but at what cost to the physical environment, soul, and community of Watertown? When is a decision by the Town Council a decision?

BP is a smart, aggressive outfit. They buy, build, adjust to market changes, and eventually sell. The LINX building sold $157.6 million, the Residence Inn by Marriot $71 million. Arsenal Yards is their biggest project to date. BP said “they’d be back for more height.” So what? That’s what for profit businesses do. But why should we allow a developer to make such drastic and permanent changes to this area of our town? A standard was established, and a deal was struck. We live here; they’ll be moving on. Enough is enough.

How can BP’s proposal not be considered spot zoning? Let’s look at rules regarding our town’s zoning variances below. BP’s request does not appear to meet the any of the conditions listed as 1, 2, 3, or 4.

(a) Where a building or occupancy permit is not applied for or is refused because of nonconformance to the terms of this Ordinance, the applicant may apply or appeal to the Board of Appeals for the authorization of a variance, subject to the provisions of §9.15 of this Zoning Ordinance.

(b) Each application or appeal for a variance from the specific terms of this Zoning Ordinance shall include a written statement justifying the appeal on the basis that all of the following conditions are met, as required by Chapter 40A, Section 10 of the General Laws of Massachusetts.

(2) Literal enforcement of the Zoning Ordinance would involve a substantial hardship, financial or other, to the appellant. NO

(3) Desirable relief may be granted without substantial detriment to the public good. NO

(4) Desirable relief may be granted without nullifying or substantially derogating from the intent of this Zoning Ordinance. NO

I urge folks to attend this Planning Board meeting on Wednesday, October 10 at 7 p.m. in the Town Council Chamber as well as the future Town Council meeting (TBD). Read the attached materials. Make your thoughts and opinions known. Complaining on FB or grumbling to your friends won’t cut it. Our community is stressed by development. Let’s not let all the work of 2015 be overturned because a developer refuses to understand that the height issue was closed in March 2016 by a Town Council vote on the RMUD amendment. Realize that after the Planning Board vote, the final vote will rest with our Town Council. The vote should be a definitive NO in both cases.

Watertown is at a crossroads. Either we can speak loudly and keep future development at a human scale, or we can remain silent while we are being robbed of the very identity that makes Watertown the place where we all chose to live.

Elodia Thomas
We Are All Watertown

Comments and back up materials: https://mawatertown3.civicplus.com/DocumentCenter/Index/1513

11 thoughts on “LETTER: Resident Urges Others to Speak Out Against Increasing Height of Tower at Arsenal Yards”