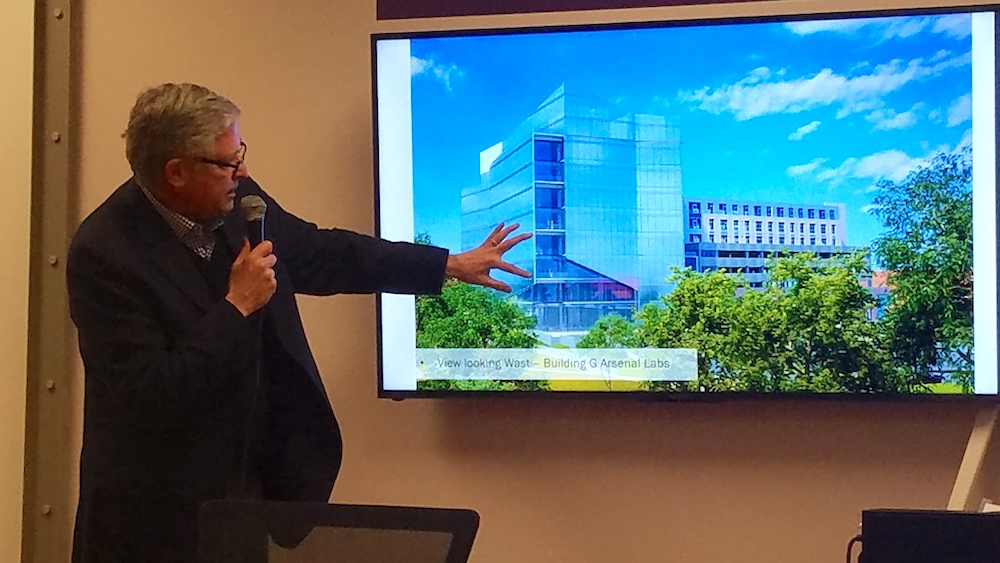 Architect Adam Gross shows drawings for the proposed new Building G at Arsenal Yards. It would be a lab/office space for biotech companies.

Looking to take advantage of one of the hottest industries in the Boston area, the developers of Arsenal Yards seek to turn the previous proposed residential tower into a biotech research and development lab and office building.

Last week, representatives from Boylston Properties presented their preliminary plans for Building G — the last piece of the Arsenal Yards project — during a community meeting.

Biotech has already made significant inroads in Watertown, with 23 companies employing about 1,500 people, said Andrew Copelotti, a principal at Boylston Properties.

“Watertown is becoming known as a desirable address for the innovation economy — for clusters such as life sciences,” Copelotti said.

That was the reason for changing Building G from a residential tower to a biotech lab and office space.

The proposed nine-story building would be widest on the second and third floors, with a slightly smaller, glassy lobby/common area. The fourth through eighth floor would “step back” and the ninth floor would be an even smaller penthouse level, said architect Adam Gross of Baltimore-based Ayers Saint Gross. There would also be one level of underground parking beneath the building with more than 50 spaces, Copelotti said.

The side facing the Charles River — the south side — will be glassy, while the north facade will be largely masonry, which sits next to another building in the Arsenal Yards project that includes a few floors of apartments, said Boylston Properties Principal Bill McQuillan.

Every floor will have a balcony, which will alternate east facing and west facing as the floors go up, Gross said.

Some at the community meeting asked if Arsenal Yards would be providing any space where the general public could go inside the building. One resident noted that in Kendall Square, some buildings have exhibition space on the ground floor.

“Because it is not residential anymore it is an opportunity to have some space for community use, particularly at night,” Sideris said. “I know it is different from dealing with tenants.”

Jeffrey Brown, who is on the Planning Board, said that a community space could provide a link between the residents and the companies in the building.

“A lot of people have probably never been in a lab building,” Brown said. “It would be interesting to go in and see what’s going on and understand why the work is so important.”

McQuillan said typically, the public would not be walking through the lobby of an R&D building. Gross said he could look into options for creating some kind of space that is accessible to the public.

Impact on the Area

Residents worried about how the new building will fit with Arsenal Park, which sits just over a dozen feet from the west side of the proposed building.

McQuillan said he will work with the Town to make the area attractive. Right now the park ends at a fence, with a significant drop to the service road behind the mall.

Some worried about the loss of trees, especially in the area of path leading from the Arsenal Yards property down to Greenough Boulevard next to the Charles River.

Steve Woods, the landscape architect from CRJA-IBI Group, said that the paths have been redesigned so that fewer trees would be removed compared to the original design.

Another resident worried that the light from the building would shine onto the nearby Charles River at night, especially because of the long hours often put in by biotech workers. Gross said some of the light can be dampened by having special glass, but said it would likely be lit at night.

Arsenal Yards’ big parking garage, with more than 700 spaces, is going up on what was the main parking lot of the old mall. It should be completed by June, Copelotti said.

The Majestic Cinema and City Works restaurant are expected to open in the fall.