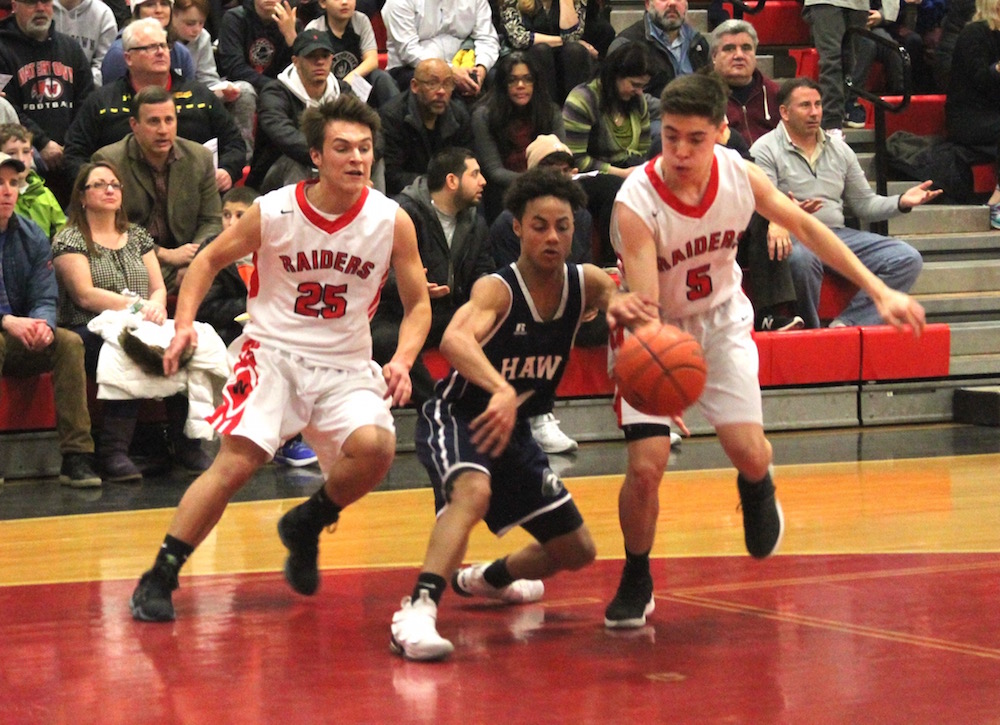 The defending State Champion Watertown High School boys basketball team has hit a hot streak, piling up the wins over the past few weeks, including a buzzer beater.

After a 1-3 start, the Raiders have improved to 9-7 overall (7-7 in the Middlesex League), including wins in six of the last eight contests.

Watertown won a thriller against Melrose, 53-51, on the last second hoop by senior Nick McDermott. Watch the highlight courtesy of Watertown Cable, below.

The Watertown High School basketball team won a thrilling game against Melrose on Friday night. As time expired, the Raiders’ Nick McDermott scored at the buzzer to give Watertown a 53-51 win! @WatertownSports pic.twitter.com/JEmdxmLe80 — WCA-TV (@WatertownCable) February 4, 2019

Fellow senior Henry Papadopoulos led the Raiders with 31 points in the win against Woburn in a 54-36 victory, while sophomore guard Gabe Spinelli led the team with 25 points in the 52-50 win over Fenway.

One more win will clinch a spot in the MIAA Div. 3 State Tournament.

At tonight’s league meet the boys had some outstanding performances. Mange Camara set two school records. He placed second in the dash with a time of 6.51. The won the 300m with a championship division national qualifying time of 34.96. — Thomas Wittenhagen (@ThomasWittenha1) February 4, 2019

Peterson’s jump of 5-feet-three-inches earned her the League title in the girls high jump.

The pair were not the only Raiders to do well at the League Meet.

Junior Rose Muldrew got third in the 55 meters with a time of 7.73.

The Raiders will compete in the MIAA Div. 4 Meet on Feb. 13.

The Watertown-Arlington co-op boys swimming team wrapped up the season with a 4-5 dual meet record, and Watertown senior Chris Kerrigan excelled at the Middlesex League Meet.

Kerrigan placed second in both the 200 freestyle and 500 freestyle events at the meet at Bentley University.

The team is in its second year, and will send three relays, along with Kerrigan, to the MIAA North Sectional Championships on Feb. 9. Kerrigan will compete in the 200 and 500 free events, while Watertown-Arlington will have teams in the 200 medley, 200 free and 400 free relays.

The Raiders boys hockey team has skated to a winning record, so far, this season. The team is not part of the Middlesex League this year, but the team has amassed a record of 8-5-3 this year.

Watertown defeated Hopedale 3-1 this week, and skated to a 2-2 tie against Newton South in the game before that. See the tying goal, via Seriovideo, below.