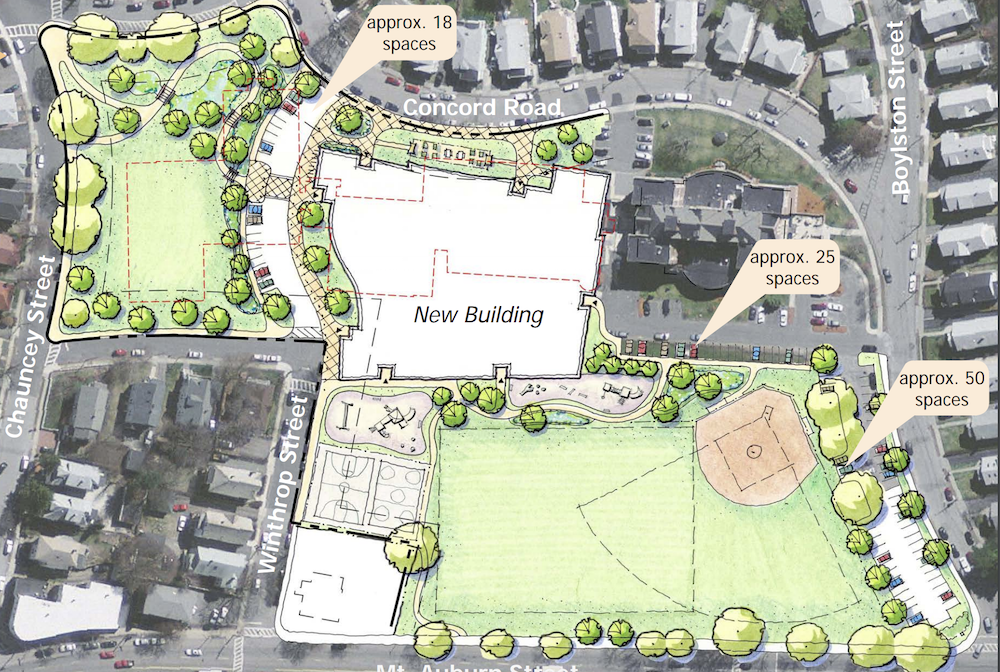 The plan for the Hosmer School campus presented to the School Building Committee on Jan. 23. it shows the brand new school, and three parking areas.

The School Building Committee said it was very pleased with the work of the architect for the three elementary school projects, so much so they would like to have Ai3 do the high school too. The reviews of the owner’s project manager, however, were not so positive, and the board will seek a new firm as the projects move forward.

Town Council Vice President Vincent Piccirilli said: “What they have done has exceeded what I thought could be done in Watertown with theses three schools.”

Ai3 has changed plans multiple times at the request of the board, and using in comments from the community. The project started as three major renovations, and now calls for two brand new school buildings at the Cunniff and the Hosmer, and a significant renovation at the Lowell.

Assistant Town Manager Steve Magoon added that Dunlap and Ai3 have been very good at responding to requests.

“Not only have they been responsible in terms of how much money we are spending, but also have been very responsive to comments they hear from the public or members of the community,” Magoon said.

School Committee member Lindsay Mosca said she likes that the firm is always focused on the primary purpose of the finished product: to educate children.

Town Auditor Tom Tracy was so pleased with their work that he asked, “Can we hire them for the high school (project)?”

As for the high school project, the town will not have as much say in which firm designs the project. The high school is part of the Massachusetts School Building Authority (MSBA) process, which provides reimbursement for almost half the cost, but the state has more control. Mosca said Watertown will only have two votes on the group of 13 that will choose which firm designs the school.

Sideris said he will do what he can to help get Ai3 for that project, too.

“If there is any possibility for us to have a public discussion at an MSBA decision point, I would stand there and say this company knows this community inside and out, and try to advocate with our stat representatives to keep Scott on board,” Sideris said.

The Committee voted unanimously to extend Ai3’s contract through the end of the construction of Cunniff, Hosmer and Lowell elementary schools. The Town Council will have to make the final approval.

The comments about the owner’s project manager for the elementary school project were not nearly as glowing. People pointed to a lack of leadership from Daedalus Projects, and even said the firm did not deliver on items promised in the contract.

“I’m not a professional but I’ve worked with other project managers,” Sideris said. “My expectations were a little higher … I don’t think that my expectations have been met. That’s my opinion.”

Community member Kelly Kurlbaum, who has experience as an OPM in the private sector, said

“I think that one issue I personally have is a lack of leadership and providing direction for us,” Kurlbaum said. “Scott (from Ai3) has done great job leading meetings, but that is something I would expect Daedalus to do.”

School Committee Chairman John Portz, who was on the group that selected Daedalus, said that one thing that made that firm stand out above the others was that they could create a website and provide public outreach and communication. He did not think that has fully come to fruition.

“I think the community outreach has not been quite what we had hoped for,” Portz said. “It is important for the (School Building) Committee to get info in a timely manner, and I don’t think that has happened.”

Piccirilli is chair of the community outreach subcommittee and said that the group got started and was put in contact with a Daedalus employee to work with. One meeting was held and a website was created, but then he said it kind of “fizzled out.” No more meetings have been held, and the firm was supposed to take emails from people attending School Building Committee meetings to create an email list. That too never occurred.

“My sense is they were so busy with other projects that they never followed up with anything,” Piccirilli said.

Kurlbaum added that she worries about Daedalus being able to oversee the project, which will be complicated with three staggered projects which overlap and must be kept on time so that students can move in and out of buildings during breaks.

“We are early in the process. We’ve got three schools, it’s a tricky schedule, we’ve got a tough budget, and the OPM is the one who is really going to drive the budget and the schedule,” Kurlbaum said. “I just have very little confidence in that if we are already having difficulties with them following through with just getting meeting minutes on time.”

She added that there are a lot of good owners project managers firms out there.

Piccirilli added that if Watertown wanted to change OPMs, this would be a good time to do it. The schematic design has been completed, but they have not hired a contractor or started the final designs.

The committee voted unanimously to go out to bid for an owner’s project manager rather than extending Daedalus’ contract.

Sideris said he would create a subcommittee to draft a request for proposals for an owner’s project manager.

One thought on “Contract Extension for Architect of School Projects, Board Wants Change of Project Managers”