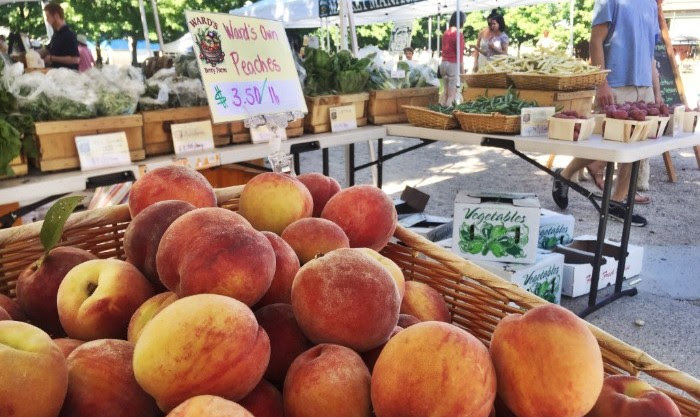 Pick up some peaches this week at the Watertown Farmers' Market.

Warm weather will return in a few months, and with it the return of the Watertown Farmers Market. However, the market will have a new location and a new day, plus it will be teamed up with the Summer Concert Series for several weeks.

Starting on June 12, and running through Oct. 9, the Watertown Farmers Market will be held on Wednesdays and will be located at Saltonstall Park in Watertown Square, next to Town Hall. Hours will be 2:30-6:30 p.m., said Stephanie Venizelos, Wellness Program Manager with the Watertown Health Department.

The evening of the Watertown Summer Concerts also moves from Thursdays to Wednesdays. This year will be the 20th season for the free concert series, which will run from 6:30 p.m. to 8 p.m. in Saltonstall Park.

The Farmers Market began in 2014 at the AthenaHealth campus in the Arsenal on the Charles. It had been held on Thursdays. Two years ago, the Town of Watertown took over management and operation of the market as part of the Live Well Watertown program offered through the Watertown Health Department.

The change was made after hearing from customers at the market, along with a survey done by the Town, Venizelos said.

“We have heard it anecdotally for two years, not just with shoppers but with community booth guests,” Venizelos said. “People would say, too bad the market is not in a better spot.”

Saltonstall Park came up as a possible location because it is in a central location, has room for the market and for families to play and relax. Venizelos said a change could not be made just using anecdotal evidence, so the organizers put together an online survey.

“In the survey, the number one change people wanted was a new location,” Venizelos said.

They also mentioned a new day, because Thursday was also the day of Belmont’s Farmers Market, Venizelos said.

“In surveys people asked for an earlier day (in the week) or a weekend,” Venizelos said.

Around the same time, Venizelos was approached by a member of the Summer Concert Series organizing committee.

“They wanted a change because a lot of people are getting ready for a long weekend on Thursday night,” Venizelos said. “They wanted an earlier day.”

While the market will close on Oct. 9, a few weeks earlier than past years, Venizelos said they hope to have other offerings after that.

“We are talking about adding an event in the late fall, perhaps a holiday stock up,” Venizelos said.

Watch for more information on vendor line-up, free wellness programs, social activities, and more at the Watertown Farmers Market website: www.watertownmarket.com, or on Facebook at www.facebook.com/watertownmarket/