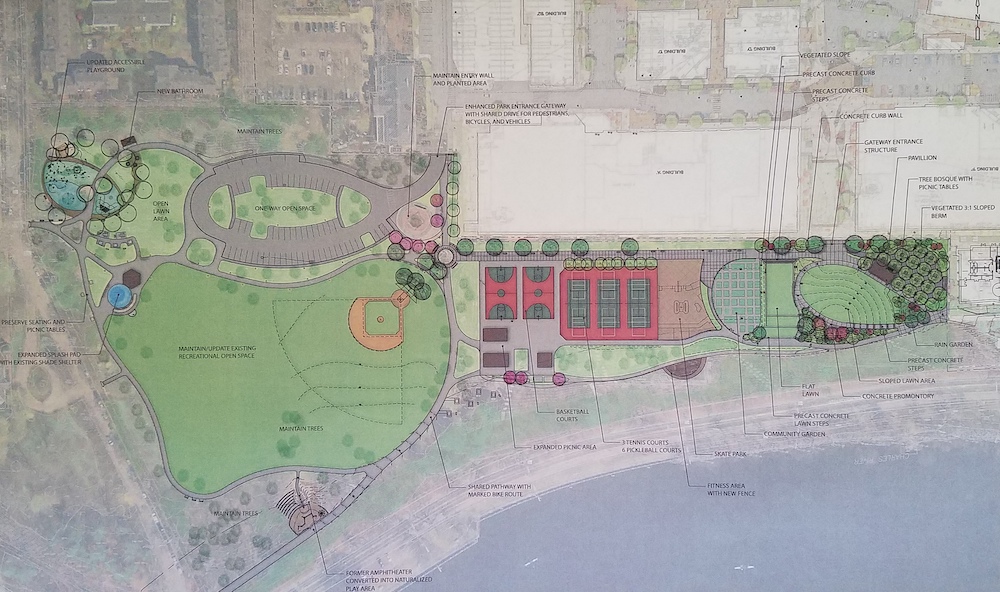 A view of the planned renovation of Arsenal Park.

The Watertown Town Council approved $250,000 to be spent on the design of the majority of Arsenal Park renovation, while another section is moving ahead with funding from the developers of Arsenal Yards.

The money will be used to do the detailed designs to all of the park, except for the eastern most part, which is being worked on in conjunction with Arsenal Yards.

The project includes a multipurpose field —including a softball field — a playground in the northwest corner with a new bathroom, a picnic area and an expanded splash pad. In addition, the plan includes two basketball courts and three tennis courts, next to a picnic area and space for community gardens.

A path connecting the Community Path near Arsenal Street to the Charles River Path will also run through the park.

The plan, which evolved out of several discussions at the Conservation Commission, is at the 25 percent level, said Assistant Town Manager Steve Magoon. The funding would help bring it to 75 percent design level.

Former Recreation Director Tom Sullivan said he was bothered that the park will be losing spaces where a number of sports can be played, including: three tennis courts, the two-sided wall (which can be used for tennis, lacrosse or to throw a ball), a volleyball/badminton court, and an additional court which can be used for street hockey, kickball, whiffle ball or dodge ball.

Councilor Caroline Bays wondered how set in stone the project will be after the designs are completed.

“Nothing is set in stone until it is constructed,” Magoon said. “We are moving onto the next step based on what we have (currently designed). That is not to say there won’t be opportunities to make adjustments, but as we move on the adjustments will be smaller.”

Meanwhile, the eastern part of the park is being worked on through a public-private partnership between the Town and Boylston Properties, the which is redeveloping the former Arsenal Mall. The Town applied for the partnership from the State Legislature in April, and received approval from the House in June and the Senate will take it up in its next session. That portion of the project is at the 75 percent design phase, Magoon said.

The area will have a couple of lawn areas, a pavilion, and a grove of tree with picnic tables in parts of the area. There will also be an entrance to the park directly from the Arsenal Yards property, near the east end of the historic Arsenal building that includes Marshall’s.

Councilor Lisa Feltner said she worries that the park is being designed for the benefit of Boylston Properties. Magoon said the developer is providing $500,000 to help pay for the improvements, and is using some of its contractors to do the work.

“It is providing a connection and amenities to Boylston Properties,” Magoon said. “That end of the park has been neglected and is not really used by anybody right now.”

Councilor Angeline Kounelis said that with the improvements that area will be much busier, and in turn will need more services such as trash removal and maintenance. She asked if the Arsenal Yards owners would be assisting with those services.

Magoon said he could ask them, but since the park is owned by the Town of Watertown, ultimately the responsibility for cleaning and maintaining the park falls to the Town.

Work on the eastern portion of the park is expected to begin in the Fall, and the landscaping will be finished in the Spring of 2020, Magoon said. The timeline is not as clear for the other potion of the park. Magoon said it depends on when the town’s designer, CDM Smith, can work on the designs. It is also designing the eastern portion of Arsenal Park, along with the redesign of the Victory Field track and courts area.

The Council approved the funding for the Arsenal Park designs 9-0.