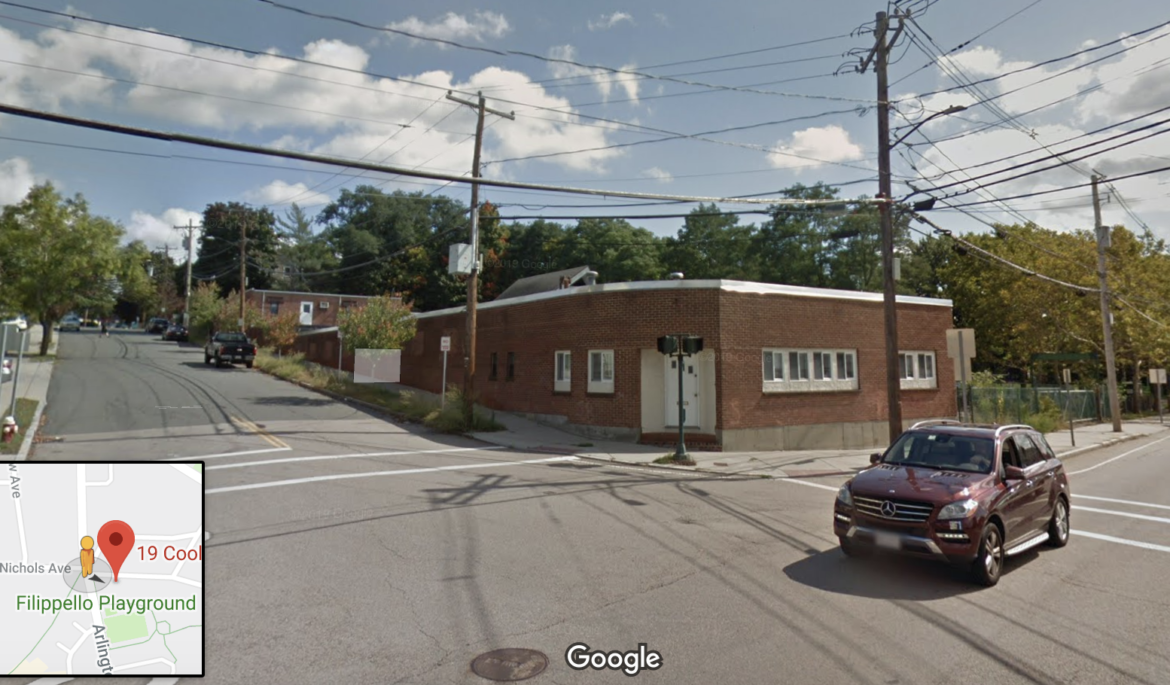 An image from Google Maps showing the proposed site of a 113 unit 40B housing project at the corner of Coolidge Hill Road and Arlington Street.

A developer has started the process to build a Chapter 40B residential project on a major intersection in East Watertown. Under the state law to encourage the building of affordable housing, 40B projects do not have to comply with many local zoning rules.

The project is proposed for 19 Coolidge Hill Road, on the former E.H. Hinds Atlantic Plant property. The proposal, according to information submitted to the MassHousing Partnership (which oversees 40B projects), would have 113 rental units on the 0.9 acre lot, and would have 28 affordable units. The proposal was submitted by 19 Coolidge Hill Road LLC.

The land on Coolidge Hill Road falls into Watertown’s Industrial 2 zoning, which does not allow residential projects. It is located across Coolidge Hill Road from Mathilda’s Sandwich Shoppe on the five-way intersection with Arlington Street (two ways), Nichols Avenue and Crawford Street.

This is not the first 40B to be considered in Watertown. One previous potential 40B was withdrawn, said Assistant Town Manager Steve Magoon.

Under 40B, the Town does not have authority to approve or deny the project, and the developers are allowed to bypass a municipality’s zoning. Magoon said that does not mean Watertown will have no input into the project.

“There is still a public process. It is not carte blanche to ignore everything, but it provides an opportunity to not adhere to all the (Town’s) rules and regulations,” Magoon said.

The fact that the project has been officially submitted by developers to MassHousing is a significant step, Magoon said, but it is an early step in the process. Magoon said the same developers have also expressed an interesest in building a self-storage facility on the 19 Coolidge Hill Road property.

If the project goes ahead, it will go before the Zoning Board of Appeals, which can comment on design and technical aspects of the proposal. It cannot, however, do an independent study of the project. Peer reviews are allowed.

The Town will submit comments on the proposed project, which Magoon said he and his staff are working on.

According to a MassHousing presentation, the comments should be based on “the development: design, access, relationship to neighborhood, wetlands, open space, etc.” However, they cannot include the fiscal impact on the town, including the public schools.

East End Town Councilor Angeline Kounelis has put together her list of comments on the 40B proposal. She notes that the Town of Watertown has taken actions to create more affordable housing.

“Watertown’s Team has worked fervently to foster affordable housing. We anticipate that the review process by MassHousing will take into consideration the plight of our East End residents, business owners and Watertown community-at-large by noting the recent, and on-going, massive developments and traffic growth within Watertown’s 4.17 sq. mile boundaries,” Kounelis wrote in the comments she submitted to MassHousing.

She added that the Town, particularly the East End, has seen many new large apartment projects built, or approved, in recent years. Those will add more than 600 units to the Arsenal Street Corridor. Also, the East End is home to several of Watertown’s largest employers.

The Arlington Street corridor gets heavy traffic from people going to and from work, Kounelis said, and it is a link between two major arteries: Arsenal Street and Mt. Auburn Street.

Being located in the five-way intersection, Kounelis said the project is not appropriate for a residential building. She also worries about the impact on nearby neighborhoods.

“The proposed density of the housing development would overwhelm the fragile residential neighborhood; comprised predominately of small, multi-family housing units; abutting commercial properties,” Kounelis wrote. See all her comments below:

Kounelis Email 40B by Charlie Breitrose on Scribd

Developers can use 40B if a community does not have a Subsidized Housing Inventory of least 10 percent of its total housing units. Watertown falls short of the 10 percent mark, but has taken steps to increase the Town’s affordable housing stock. A 40B project must have 25 percent of its units rented or sold at affordable rates.

As of June 2018, the Town needed to add 481 more affordable units to reach the 10 percent mark, according to Andrea Adams, a Senior Planner with the Town’s Department of Community Development and Planning.

From 2010 to June 2018, the Town added 231 affordable units, according to a report In 2016, the Town Council approved increasing the required amount of affordable units in new developments from 12.5 percent to 15 percent. However, most of the big residential projects on Pleasant Street and Arsenal Street were approved before the 15 percent requirement was adopted. An exception is the Arsenal Yards complex.