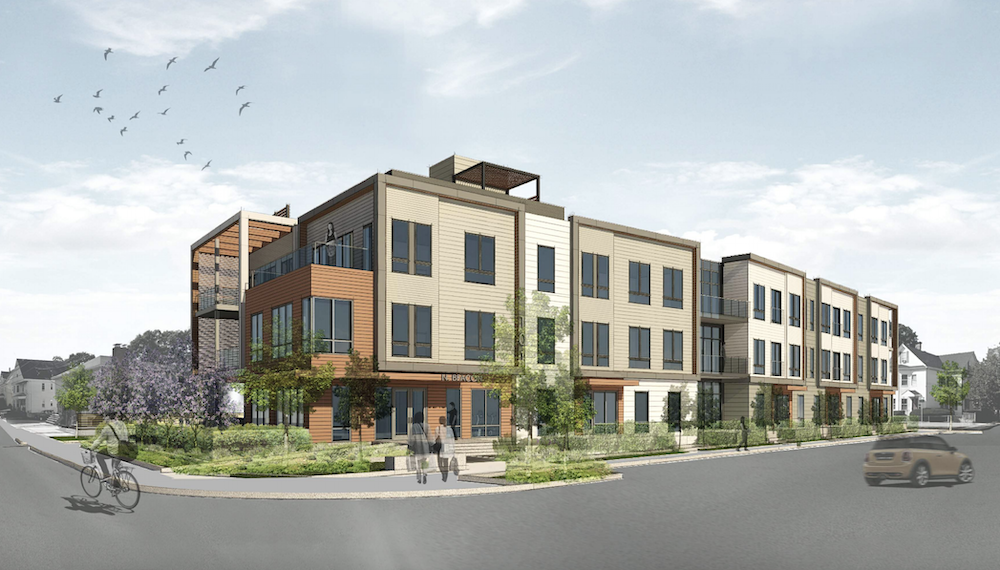 The proposal for 101 North Beacon St. would build a three-story building with 28 condos.

The new proposed condominium building at 101 North Beacon Street received good marks for its design and the fact that the units will be sold, not rented, but those living nearby worry it will have a negative impact their quiet neighborhood.

On July 10, the Planning Board gave its recommendation that the project should be allowed to go ahead. The project will now go to the Zoning Board of Appeals for final approval.

The proposal calls for building 28 condos in a three story building on the former site of AA Rentals, said project architect Dartagnan Brown of Embarc Studio. There would be 20 two-bedroom units and eight one-bedroom units. Most of the units, 24, will have access to a patio, balcony or deck. The building would also have an outdoor patio on the roof. Four the units will be be sold through the affordable housing process.

Planning Board member Payson Whitney said he was glad to see the units will be sold.

“One thing I do like about this proposal is these are units for sale, not rentals,” Whitney said. “A lot of rentals are going up, and have gone up, in this end of the East End. I live close to here and it is good to see more ownership coming into the neighborhoods.”

While there are improvements planned for the property, Planning Board member Gary Shaw said he he did not see anything being done with the project to help the area beyond the site.

Resident Nancy Kay Demick lives on Irving Park, around the corner from the project, and she said many residents showed up for the two community meetings about the project to express their concerns. She is not sure that everyone heard about the Planning Board meeting. Demick said she and other nearby residents worry about the impact of such a dense project on the neighborhood.

A Ladd Street resident said the street is a quiet one, and the project could add more cars to Ladd Street.

Traffic consultant Giles Ham of Vanasse & Associates said the traffic from the project will be less than when it was AA Rentals in the morning rush hour. The building is projected to have 10 trips during the morning peak hour, compared to 13 in its former use. AA Rentals closed at 4 p.m., so it did not add any traffic in the afternoon peak, and the building is projected to have 13 a day during the evening rush hour.

Neighbors said traffic backs up on Irving Street heading north toward North Beacon Street. Ham said the traffic signals in the area will be changed to improve the situation.

“There is some level of queueing there today, with these signal changes the situation will get better than they are out there today,” Ham said.

Some Planning Board members worried that the parking lot will become a cut through. The driveway will be one way from Irving Street to Ladd Street.

Designers said the building will have more landscaping, and less asphalt coverage. The building itself will be farther from the abutting neighbors on the back property line of the project. Currently the building is 17-20 feet from the house in back of it, but that will increase to 40 to 56 feet.

Jim Muise, who lives right behind the site on Ladd Street, said that he is concerned that a number of the parking spaces will right next to the side of his house. The designers said there will be a fence in between.

Landscape architect Blair Hines said designers tried to create a buffer with to the neighbors with new trees on street edges and the fact that the building is pushed off the street means there is more space for plantings.

Along with the rear fence, Hines said evergreens trees will be planted to block views into their homes from the new building.

The Planning Board voted unanimously to recommend that the Zoning Board of Appeals (which has the ultimate approval of the project) to approve the special permit to build the project.