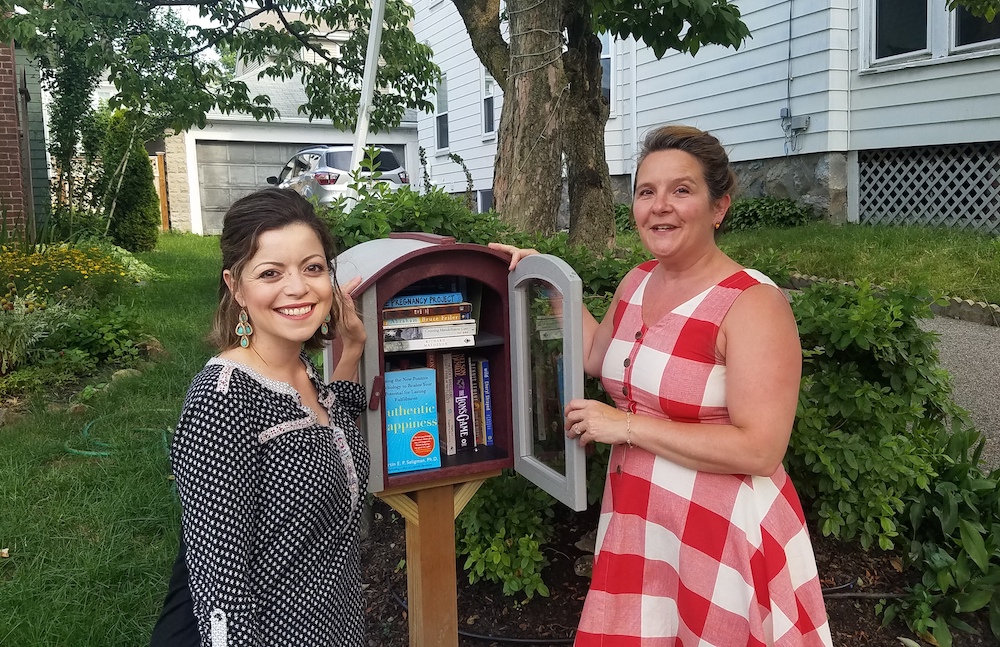 Rebecca Conlon and Emily Neill stand next to the Little Free Library that recently went up on Hall Avenue.

Watertown’s branch libraries closed in 2007, but book lovers can now visit a little library just off Belmont Street in Watertown that is not much bigger than a mailbox.

Standing on a single post, the library holds about 30 books. People are welcome to grab something to read, as well as dropping off something for someone else to enjoy.

The selection includes fiction, non-fiction, children’s books, books for teens, and tweens, and more, said Rebecca Conlon, who volunteered to house the library in her front yard.

The library is active just about everyday, said Emily Neill, who lives just around the corner from Hall Avenue. She recently read a book she got at the mini library about women in power and how they deal with internet trolls.

For Conlon, the library has been great for her young children.

“I’ve read a lot of children’s books,” Conlon said. “I have 5-year-old twins. They love coming out here to open it and see what is new.”

There are few rules with the Hall Avenue Little Free Library, but one is not to leave so many books that they do not fit into the library.

Neill had seen the libraries in other areas and thought it would be a great idea for her block.

“Hall Ave. has a nice email chat, and I knew if I sent it out I would get a responses,” Neill said.

The mini-library is not the first one in Watertown, the pair found out when they publicized theirs on Facebook.

“There is one on Garnet Street, one in front of the First Parish U.U. Church and one in East Watertown,” Conlon said.

The Hall Avenue library has the distinction of being the only one to be listed on the littlefreelibrary.org website. On the network, people can find out about how to establish their own library, how to promote their library and and how to get their library on the map. There are contests and other fun ideas on the site, too.

“Looking at their Facebook and website pages, you can see the extent that people get into it,” Conlon said. “People leave bookmarks. Some do it in the colors of the rainbow for Pride Week. People go on vacation and go to them. They are very popular.”

Picking out a mini-library proved quite complicated, Neill said. There are many options out there: plans requiring builders to cut their own wood, kits that must be assembled, and even ones available on Etsy.

In the end, Neill picked out a pre-made little library, Neill said.

“If you have people willing to donate money, it is easier to buy one that is already assembled,” Neill said.

The one on Hall Avenue is made of a weatherproof plastic material that does not have to be painted. It just needed to be attached to a post and installed.

“My husband and a few of the husbands put up it up and mounted it on a pole,” Conlon said.

Neill said she thinks little libraries would be a good project for a Girl Scouts, Cub Scouts, or a school.

The library is a good way to bring neighbors together. In recent years, Neill said, Hall Avenue has become a close community with people of all ages.

“When I first moved here 10 years ago there were no children. My children were the only kids,” Neill said. “There is a new generation here. A lot of families have moved here and they have kids.”

To celebrate the completion of their Little Free Library, Hall Avenue had a grand opening event in May which was attended by dozens of people.

4 thoughts on “A Little Library in Watertown Brings Together Book Lovers, Neighbors”