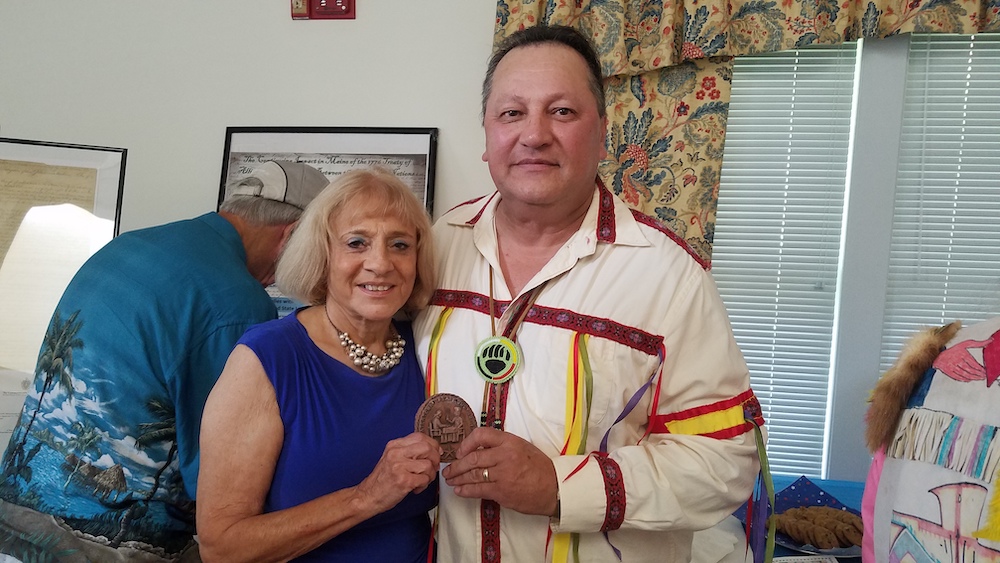 As part of the Treaty Day Celebration on July 20, Governor's Councilor Marilyn Petitto Devaney from Watertown received a medal from Henry Bear, a representative of the Maliseet tribe.

The Treaty of Watertown, the oldest treaty made by the United States with a foreign power, was signed in 1776, but the agreement with Indian tribes in the U.S. and Canada still holds sway in 2019.

On Saturday, the Historical Society of Watertown celebrated the annual Treaty Day, marking the anniversary of the signing of the first Treaty between Massachusetts and the Mi’kmaq and Maliseet (also called the St. John’s) tribes on July 19, 1776.

The primary focus of the Treaty for the young U.S. was to have a military ally against the British, but it also provided rights for the tribes over land and fisheries in what is now Maine and Canada.

One of the attendees was the descendant of one of the original signees of the Treaty. Henry Bear, of the Maliseet tribe who used to represent the tribe in the Maine House of Representatives. His relative Ambrose Bear was Maliseet Chief when he signed the Treaty in 1776.

During Saturday’s, ceremony he presented a Treaty of Watertown medal to Watertown’s Marilyn Petitto Devaney for her help winning a court case over fishing he was involved with in Maine. Petitto Devaney also serves as a member of the Governor’s Council, the group which descends from the group that signed the Treaty on behalf of Massachusetts in 1776.

Petitto Devaney said she was not expecting any sort of recognition. She was in tears when she received the medal.

“For him to give me this!” Petitto Delaney said. “He said my letter helped him win a case in Maine.”

The medal is made of red clay, which is indigenous to the area where the Maliseet live, Bear said. He modeled it after a medal he was presented at a previous Treaty Day ceremony by Chief Roland Jerome, of the Native American Cultural Center, who represented the Mi’kmaq on for the Treaty Day ceremony in prior years.

In the court case, Bear faced a fine for over fishing the allowed amount of elvers (immature American eels). He claims he was only over the 1/100th of a pound, and compared it to getting a speeding for going 50.5 mph in a 50 mph zone.

Maine’s Department of Marine Resourcessaid Bear continued to fish even after he had reached his quota, and the amount above the limit does not matter, according to a story the nationalfisherman.com site.

To prove his point, he got some documentation from present day officials in Watertown and Massachusetts, including a letter from Petitto Devaney

“We were fighting for our rights,” Bear said. “The Treaty really is still alive. To hold this celebration is very appropriate.”

Saturday’s ceremony moved to the Watertown Senior Center from its usual spot at the nearby Edmund Fowle House, due to the heat. The event not only celebrates the signing of the Treaty of Watertown, but also the first reading of the Declaration of Independence in Massachusetts, on July 18, 1776. Both events took place in the Fowle House, which served as the meeting place for the Massachusetts Executive Council.

Members of the Historical Society of Watertown dressed in Colonial clothing and read the Declaration of Independence and the Treaty of Watertown as part of the celebration.

For many years, Petitto Devaney said, the Treaty of Watertown was not widely known about in the town where it was signed.

“When I was on the Town Council, Chris Groden told us about it, and he asked us to hold a Treaty Day each year,” Petitto Devaney said.

Find out more about the Historical Society of Watertown and the Fowle House here: http://historicalsocietyofwatertownma.org/HSW/

2 thoughts on “Treaty of Watertown, Signed in 1776, Still Has Power Today”