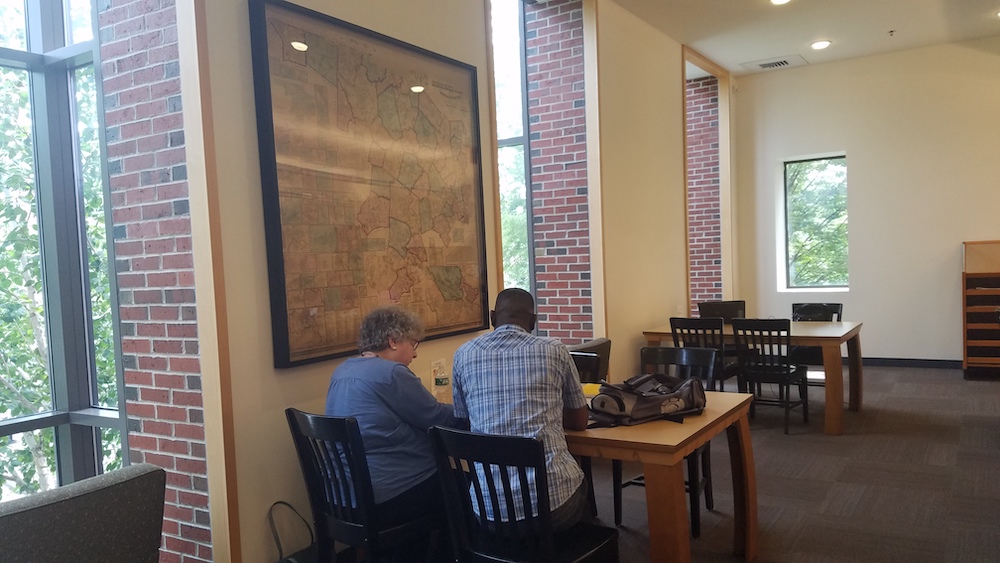 A newly restored map of Middlesex County from 1856 now hangs on the second floor of the Watertown Free Public Library.

A piece of history now hangs on the second floor of the Watertown Free Public Library, near the study area and computers. The map of Middlesex County dates to 1856, and was recently restored as part of the library’s effort to preserve the town’s history.

The map shows the outlines of the communities of Middlesex County and measures about 5 feet by 5 feet. It was created by Henry Francis Walling who served as “Superintendent of the State Map” for Massachusetts. He made it using the state-of the-art technique of the time known as trigonometrical survey (also known as a triangulation or geodetic survey).

Along with the town borders (in 1:50,000 scale), the map has 64 smaller maps of town centers at a scale of 1:2,000. The inset map of Watertown indicates the locations of private homes labeled with owners’ names, Town Hall, churches, the grist mill, Spring Hotel, and other sites, said Assistant Library Director Caitlin Browne.

“It’s a cool map to look at,” Browne said. “We didn’t want to let it deteriorate.”

The fine details of the map include a geological map, business directories for several communities, a table of distances, and some statistics on the county.

The map went up in June. Before that the map had been sitting in a storage area at the library where there are a number of maps. Then it spent more than a year being restored. Beginning the fall of 2017, the Northeast Document and Conservation Center in Andover, the local experts on conservation and archival restoration, worked on the map. It was cleaned with dry and wet techniques, parts of the map that had been lost were inpainted, tears were aligned, loose pieces were inserted, and finally it was mounted and framed, according to Browne.

“We’re thrilled with the final product,” Browne said, “it looks great in its new location and I see people studying it all the time. We hope anyone in the community interested in maps and Watertown will stop by and enjoy this piece of history brought to life.”

The cost of the project was about $10,000, and the money came from a fund created by the Town Council for preserving the library’s local history collection, Browne said. The Middlesex County map was the second map restored as part of the preservation effort. The first one is a map of Watertown from 1874, on display in the hallway near the rear entrance to the library.

“We are working on the local history collection to preserve it and keep it in good condition,” Browne said. “This year we got additional funds to hire a part time archivist to go through the collection to put items in protective coverings and make sure that we are not going to lose anything.”

The Council earmarked $21,000 for preserving the local history collection. The archivist has not been hired yet, but the job opening was posted in June.

One thought on “Watertown Library Displaying Newly Restored Map from 1856”