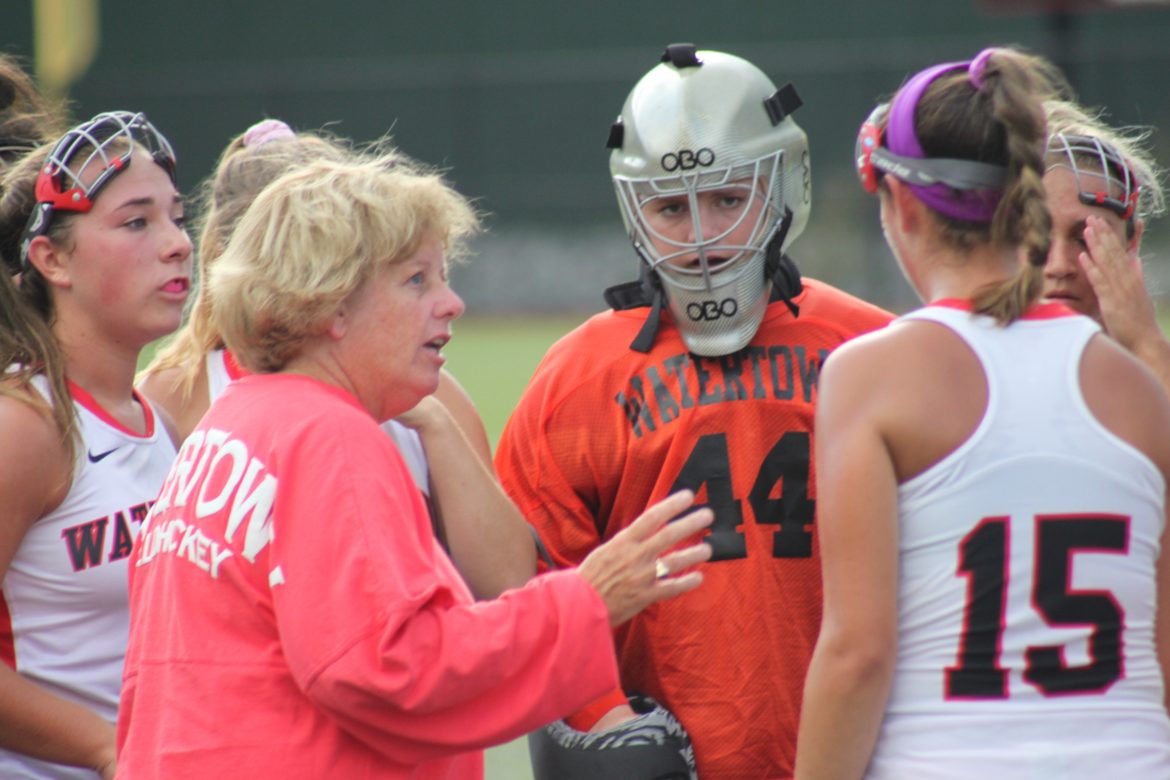 The National Field Hockey Coaches Association (NFHCA) is honored to announce that head field hockey coach at Watertown High School, Eileen Donahue, will be inducted into the NFHCA Hall of Fame  this year.

This fall, Donahue will begin her 33rd season at the helm of the Watertown High School field hockey program — a team she’s led since 1986. Her tenure with Watertown is full of record-breaking performances and a dominance enjoyed by only a handful of coaches in the history of high school sports.

“Eileen Donahue is a true field hockey legend as a top high school coach in the New England area and beyond,” remarked NFHCA First Vice-President and chair of the NFHCA Awards and Hall of Fame Committee, Julie Ryan. “Her program at Watertown High School has not only sent players to colleges across all three divisions, but she has fostered a culture of winning that has set national records. We are thrilled to recognize Eileen for her continued success and the positive impact she has had on our sport.”

“I am very honored to be selected to the NFHCA Hall of Fame. In the United States, there are so many talented, hard-working, and successful field hockey coaches, to be recognized with these top coaches is so humbling,” said Donahue. “Thank you to the selection committee for choosing me.”

Donahue started her athletic career as a three-sport athlete at Belmont High School — after graduation in 1977, she attended Northeastern University where she majored in physical education and health. Following the completion of her degree in 1982, Donahue accepted a teaching post at Watertown School District and spent her afternoons coaching the junior varsity field hockey, basketball, and softball teams. In 1986 when she was asked to coach the varsity field hockey team, everything changed for the Watertown field hockey program.

In her first season at the helm, the Raiders posted a 17-1-5 record and Donahue brought the first field hockey state championship trophy to the halls of Watertown High School.

Away from the Raiders, Donahue has reached athletes across the greater Boston area with her Watertown Elite Field Hockey Clinics, which introduce the sport and fundamental skills to students of all ages.

“I’ve been very fortunate to have great coaches who have assisted me in teaching so many amazing field hockey players,” remarked Donahue. “We’ve emphasized focusing on one practice, one game at a time. Everyone, including myself, has to work hard. At Watertown, we strive to do our best to put ourselves in position to succeed.”

Donahue will be officially inducted into the NFHCA Hall of Fame at this year’s NFHCA Awards Dinner sponsored by AstroTurf. The dinner will take place on Thursday, January 16, 2020, as part of the2020 NFHCA Annual Conventionin Lake Mary, Florida. Her class — the Class of 2019 — will be the 20th class to be inducted into the NFHCA Hall of Fame.FacebookTwitterEmailPrintAddthis