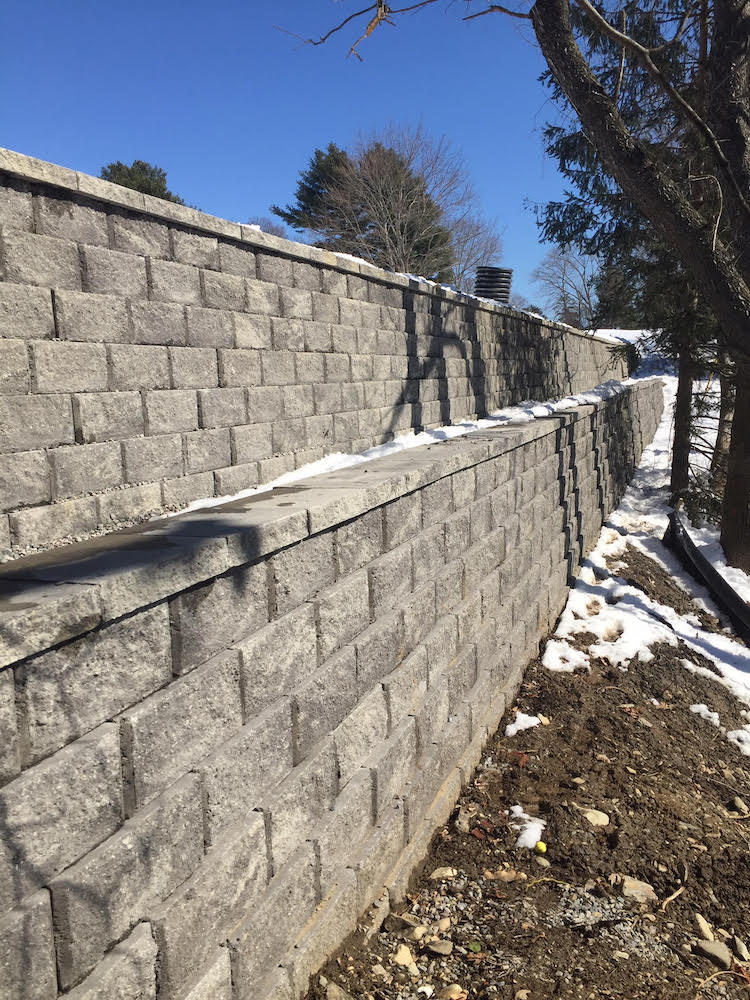 The wall that went up near Oakley and Arden roads. Neighbors are upset that it was built without informing them, and say it has caused flooding on some properties.

The Watertown Zoning Board of Appeals rejected Oakley Country Club’s appeal to reverse a decision by the Zoning Enforcement Officer that a wall built by the club near a residential area violates the Town’s zoning rules.

The 10 foot high wall stretches 175 feet along an area of the perimeter of the golf course, and stands over homes on Arden and Oakley roads. The Zoning Board heard not only from representatives of the Country Club, but also from neighbors who have complaints about the wall including that it has cause flooding in the area.

In April, the Town’s Department of Community Development and Planning issued a stop work order for the project because it did not have a building permit. It required the project to go to the ZBA for a ruling on whether the work required a special permit because it expanded or changed the use of the property.

Jack Bartley, president of Oakley’s board, said the club built the wall as part of an effort to improve drainage in the area and to improve the land near the practice range. He acknowledged the club had poor communication with neighbors and that the work was done without a building permit.

“Despite the advice and assurances our then consulting engineer to the contrary, we should have applied for a building permit for our retaining wall after approval for the stormwater permit by the (Department of Public Works),” Bartley said.

The project started in the fall of 2018, when about a dozen trees were removed. This was done without reaching out to neighbors, a number or people said. The wall was built in December, and according to neighbor Jen Green, the flooding problems started in January.

“What I experienced on Jan. 24 was water pouring down, across my lawn, down my stairs and down the street,” said Green, who showed a video of water cascading over the top of the wall and a stream of water going across her back yard.

She added that the flooding was not limited to that day, and that her back yard is soggy most of the time, and she even has had standing water in her front yard. Other neighbors have had flooding problems since the wall went up, Green said.

Oakley removed the original engineer and hired Brad McKenzie, was hired in May. He said he made changes to the plan, and improved the drainage.

“Since may, there have been no flooding or erosion events, except for the extreme rain event in August when three inches of rain fell in a short period of time,” McKenzie said.

He added that trees and vegetation will be planted near the wall to screen it from neighbors.

Another item hanging over the whole project is a 40 foot tall fence on top of the area with the wall, which was shown in plans originally submitted to the DPW when the Oakley applied for the stormwater permit.

Bill York, an attorney representing Oakley, said the fence has been removed from the plans, and added that the main intent of the plan was not to put up a fence to expand the practice range. Instead, the intent was to improve drainage.

“What we would be willing to do, and I have expressed this to (town) staff, is to provide a covenant assuring that,” York said. “Oakley has no intent to put up fencing,”

Others were not convinced. Anthony Donato, who is on the council but spoke as some who lives nearby, said he had heard members of the club talking about an expansion of the practice range.

ZBA member David Ferris said, in his experience as an architect, he would not have built such a large retaining wall, and bring in more dirt to level the land if he were designing a drainage project. McKenzie said there are “many ways to skin a cat” when it comes to drainage projects.

York said the Country Club has a policy limiting length of the practice range to 165 yards, and said that would not be changing, with or without a fence.

The ruling of Zoning Enforcement Officer Mike Mena found that the project needed approval from the Zoning Board of Appeals because it expanded or change the use of the property. The golf course, which dates back to the 1800s, was built before zoning rules, so it has been given the designation of a pre-existing non-conforming use.

David Klebanoff, an attorney working with York and Oakley, contended that the project was not a change of use of the property, but a new structure. That would require only a building permit, and not a special permit from the ZBA.

“The yardage has not changed. The area where balls land not change. The elevation has risen a bit, but it only prevents balls from roll down the hill into neighbors’ yards,” Klebanoff said. “The area may have fewer trees and a more formal barrier, but driving range has not been expanded.”

Mena said the alternation changed the existing non-conforming use.

“We made that determination based on a number of changes to the site,” Mena said. “The project resulted in substantial removal of vegetation and trees which previously screened the golf course from the abutting properties.”

The Zoning Enforcement Officer’s ruling meant that the matter had to go to the ZBA to decide if the project is “substantial and detrimental,” Mena added.

Donato argued that by going ahead without approval from the Town, Oakley was the entity that decided whether a project made a significant change to the property.

“If that holds, what prevents Oakley from building other accessory structures over time that, when taken as a whole, results in an expansion of the use of the property as a country club?” Donato said.

ZBA Chair Melissa SantucciRozzi said she was bothered that the project went ahead without getting a permit.

“That’s almost scary. I don’t know who doesn’t know that you need a building permit for a retaining wall over 4 feet. Engineers? Contractors?” SantucciRozzi said. “I mean, I hope you have guarantee on the construction for the wall and all that.”

The ZBA discussed the issue, and voted unanimously that the improvements installed by Oakley Country Club constitute an extension of a non-conforming use and requiring approval from the ZBA.

With the ZBA vote, Oakley has a number of options, said Assistant Town Manager Steve Magoon, including: applying for a special permit from the ZBA to get approval for the work that has been done, appeal the ZBA’s decision in the State Land Court, or return the site to its previous condition.