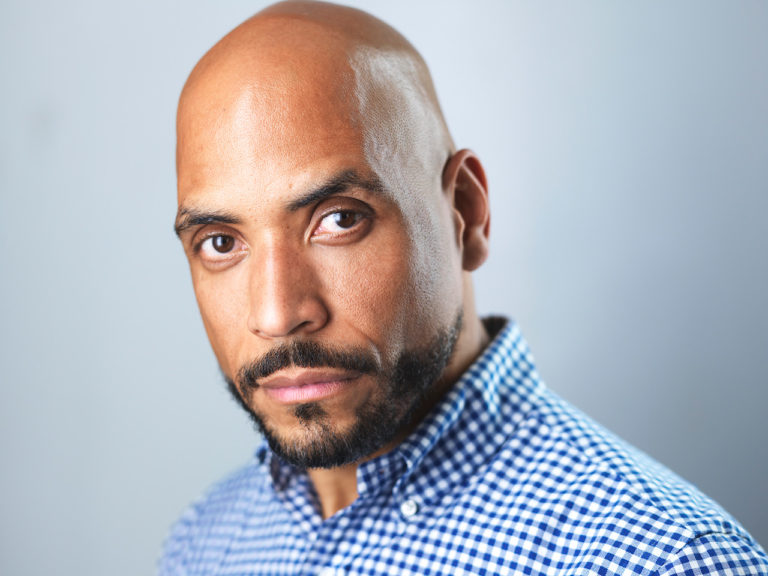 New Repertory Theatre’s new Artistic Director, Michael Bobbitt, has only been in Watertown for a couple months, but he has already started to become a familiar face around town.

When meeting Bobbitt, you cannot miss his enthusiasm and his friendly and positive personality. Watertown News recently caught up with him at one of his new favorite spots, Red Lentil in East Watertown.

Bobbitt trained as a dancer in his native Washington, D.C., and in New York City. While he loved performing, Bobbitt said he was drawn to the work off stage that makes the art possible.

While most of his role as artistic director is away from the stage, Bobbitt will be directing the musical version of Oliver this season. He is also making plans for next season.

Another big part of his job is the public relations aspect, Bobbitt said, which he seems to embrace wholeheartedly. Before the actors hit the stage for a recent production of Nixon’s Nixon at the Mosesian Center for the Arts, Bobbitt came out to get crowd excited for the play and make a plug for patrons to become season subscribers.

During his brief talk, he said he wants to hear from the audience about what they thought about the play, ideas for future productions and more.

“I make my email available at the show (michaeljbobbitt@newrep.org),” Bobbitt said. “I say, ‘Tell me what you think,’ If I don’t have 200 emails the next day I will be disappointed.”

Bobbitt takes over from Jim Petosa, who was New Rep’s Artistic Director for seven years. New Rep announced Bobbitt’s hiring in March, and he and his predecessor worked together in the run up to the 2019-20 season, New Rep’s 35th.

“Jim and I co-planned this season,” Bobbitt said. “He wound up picking the first half and I picked the second half.”

The 2019-20 season, dubbed Transitions, features six production on the Main Stage at the Mosesian Center for the Arts, located at the Arsenal on the Charles. There will be three musicals and three dramas, including Oliver, Hair and Fences.

This year’s slate will not include any plays in the Blackbox Theater. Bobbitt said he loves the plays in an intimate setting, adding that the Black Box Theater was one of the reasons he was attracted to New Rep. Financially, however, these productions do not add up.

“We would need to run it for 15 weeks,” Bobbitt said. “We are going to focus on the Main Stage.”

Bobbitt comes from the Washington, D.C., area, where he ran the Adventure Theatre for a dozen years. The theater is the leading children’s theater in the D.C. area. He described the focus as plays by adults for children.

The time seemed right for Bobbitt to find a new challenge.

“I grew up in D.C. I loved living there. I loved working there,” Bobbitt said. “The goals that I set when I started at Adventure Theatre, I did it all.”

At the same time, he and his partner recently got their son settled as a college freshman in Florida.

When he decided to leave, Bobbitt said he targeted two areas of the country, the Pacific Northwest and New England.

He knew Petosa previously and when he saw the job opening he reached out to him.

“I asked do you think I should apply for the position. He said ‘Yes!'” Bobbitt said.

Bobbitt added that he loves the facility at the Mosesian Center. It is one of the biggest stages in the area, and it provides a nice venue for audiences.

“The sight lines are great. There is not a bad seat in the house,” Bobbitt said.

New Rep has seen declining attendance in recent years, and Bobbitt seeks to turn that around, including making a special offer to Watertown residents.

“We are trying to rebuild with the community and get as many butts in the seats as we can,” Bobbitt said.

Everyone in town can get one free ticket to a New Rep production this season (click here for more details).

“Hopefully once the come be will be part of the family and come back,” Bobbitt said.

Before the show, Bobbitt said New Rep seeks to get up to 2,000 subscribers, and they need to add several hundred new ones to get there.

Some have said that theater is a diminishing art form, but Bobbitt does not subscribe to that theory. He notes that the art form has been around for 4,000 years, and offers something that many other types of entertainment cannot provide.

“Theater is one of the few places where people can come together for one shared experience,” Bobbitt said.