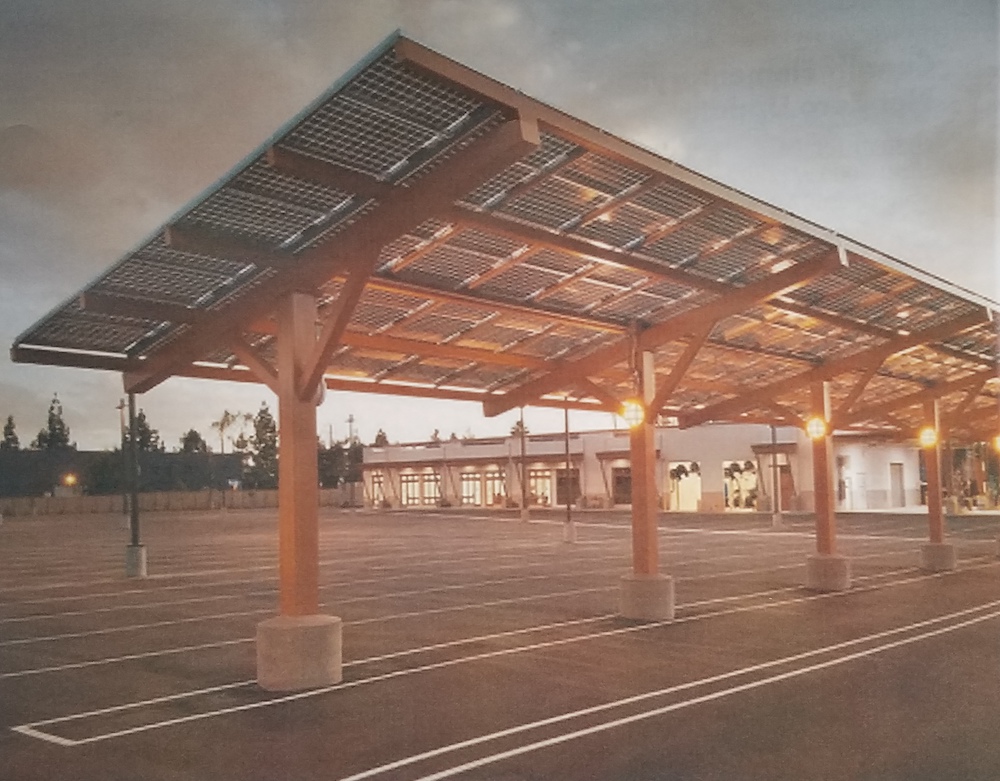 An example of a solar array canopy with a timber frame in a parking lot. They can be made of other materials, including metal.

Architects showed the School Building Committee what it would take to make Watertown’s new elementary schools net zero — so the campus would generate enough energy to cover the electricity used to run the building.

Watertown will be building two new elementary schools — at Cunniff and Hosmer — and school officials seek to make them not only green schools, but are looking at possibly making them net zero schools.

Wednesday night, architect Scott Dunlap of Ai3 Architects, told the committee overseeing the project that the energy would be generated by photovoltaic (PV) solar panels. In order to generate the amount of energy used in the school, they would have to be not only on the roof of the schools, but also other places on the school property.

He said that designers want to find out where the School Building Committee stands on going for net zero.

“We are trying to get a sense if this committee is committed to this level of photovoltaic coverage,” Dunlap said. “We don’t want to spend the town’s resources and design it and then find out there is not much appetite for it.”

Town Council President Mark Sideris, who chairs the School Building Committee, said he wants to wait to see the cost benefit of installing the photovoltaic system, but added: “the feeling I get from this committee is we should do as much as we can to get to net zero.”

“We may adjust the locations, or break them apart, but it will take this order of magnitude (of PV panels),” Dunlap said.

The Lowell School will undergo a thorough renovation, and have some additions, but will not be able to reach the same levels of sustainability or energy savings due to the age of the school.

Committee member Paul Anastasi, a former school facility manager in Watertown and Newton, said that his experience with solar panel arrays on canopies in parking lots is that they can pose some challenge with snow removal, but they are popular with teachers because they provide a covered parking area when it rains or snows.

Dunlap said the panels are usually angled so that the snow slides off onto an area off of the parking lot.

Heidi Perkins, the district’s director of Finance and Operations, worried about clearing snow off roofs which also have panels on them. Dunlap said that the building codes require the roof to be able to handle 8 to 10 feet of snow on them.

Leo Patterson, a committee member who is also an architect, wondered if the district would own the PV panels, or allow a power utility to own them. He noted the trade-offs. If the town owned them it would get to use the power generated in the school, but it would also have to pay for their maintenance and repair. If a power company owned them, they would pay for the upkeep, but would get credit for the power generated and the tax credits.

Dunlap said he anticipated the schools would own the panels.

The drawings for the Hosmer showed that the arrays would have to be in many parking lot area, including the ones running along the back of the Brigham House. Assistant Town Manager Steve Magoon asked whether the would be shaded by the Brigham House. Dunlap said shadow studies show they would not be impacted much.

Architects also updated the committee on efforts to make the new schools sustainable and energy efficient. The goal is to make Hosmer and Cunniff LEED Gold schools.

LEED (Leadership in Energy and Environmental Design) is an industry standard for “green” construction. To reach the Gold level, the projects must get scores of 60 points or higher. Both are close, with Cunniff at 59 and Hosmer at 58, according to consultants hired by Ai3.

Dunlap said there are still points that could be attained, but he said they may require more money than was budgeted or approval from the town.

One example is a rainwater management system, which would reuse collected rainwater in restrooms and would earn 6 points. This system, however, would cost $400,000 or more, Dunlap said.

The schools could also go for optimized energy performance, which requires schools to reduce the amount of energy used during peak periods during the summer. This would earn one point, and would require the town to agree to do so.

Magoon wondered if that means completely turning down electricity, or just cutting down use.

“If it is not so robust, sure, but if it shuts down the system, no,” Magoon said.

Alex Sieving, an architect with Ai3, said that the Target in Watertown participates in the program, and she was shopping there during one of the periods of lower power use.

“The lights were a bit dimmer and it was warmer than usual, but I thought it was a great way to avoid a brownout,” Sieving said.

Dunlap said he would discuss the possible areas to gain LEED points with the School Building Committee’s Sustainability Subcommittee and report back to the full Committee at a later meeting.

The next School Building Committee meeting will be at 6 p.m. on Oct. 16 in Town Hall.