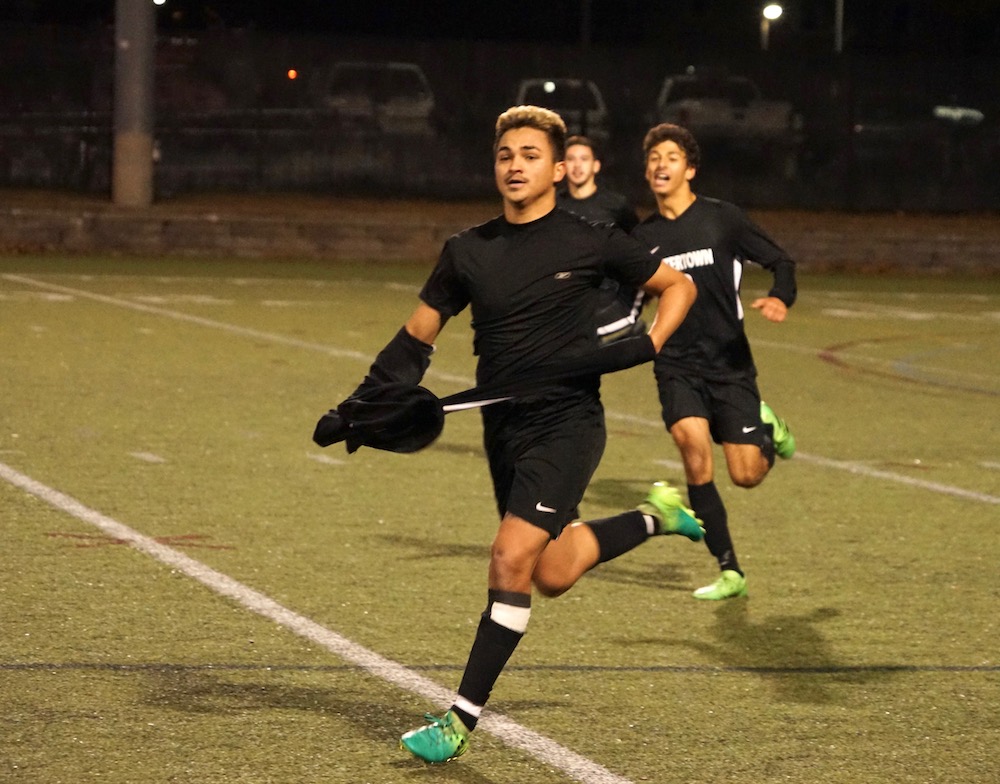 Watertown's Rodrigo Freitas celebrates after scoring the winning goal in double overtime over Dracut in the North Section quarterfinal.

Watertown High School’s boys soccer team fended off waves of attack from Dracut in the Div. 3 North quarterfinal, but in crunch time Rodrigo Freitas struck and won the game for the Raiders in sudden death overtime.

The third seeded Watertown (14-4-2) defeated sixth seed Dracut (12-9) by a score of 2-1 in double overtime Wednesday night at Victory Field in the state tournament game. The win was the second straight in overtime for the Raiders.

The winning goal was just like the team was coached, said Watertown head coach Frank Cacia.

“We tell our forwards to hold our ball a quick minute and wait for our midfielders, Asaph (Oliveira), who hadn’t played the whole game, we put him in to give them a different look,” Cacia said. “He was able to hold the ball there and he found Rodrigo and he was clinical on that finish — side netting, beautiful, beautiful goal.”

The outcome was in doubt for most of the game. The teams played a scoreless first half, but Watertown had some chances in the second half, including a shot that went off the crossbar, but was covered by the Dracut goalie.

On the other end, Watertown goalie Devon Breen made a diving save of a ball heading into the upper left corner of the goal.

With 20 minutes left in the second half Caiden Kiani headed in a ball from a free kick to give the Raiders a 1-0 lead. Just one minute later, however, Dracut tied the score.

The Raiders switched their usual formation — 3-5-2 — to a 4-1-4-1 to add an extra defender to counter Dracut’s attack, Cacia said. Team captain Gevork Karapetyan moved back to man-mark the Middies’ most dangerous player.

The Middies still created several chances late in the second half, including one that required another diving save by Breen.

“We were surviving, our players started cramping up. We were really in survival mode for 10 to 15 minutes,” Cacia said. “Once we got through that I felt pretty good in the overtime because we had been there.”

On Monday night, the Raiders defeated Weston 3-2 in overtime to win the first round tournament game. After Wednesday’s game, Cacia appeared both thrilled and relieved.

“I think I’ve aged 20 years in two games,” Cacia said. “It is not the way you draw it up. It’s such a character builder what happened last game and then fight back (tonight) after giving up the lead.”

Next up for the Raiders is the winner of Thursday’s game between second seed Northeast Regional (13-3-2) and 10th seed Lynnfield (10-8-1). The Section semifinal is scheduled for noon on Monday, Nov. 11.

The loss ends Watertown’s run of North Section titles, which reached 11 straight in 2018. The last time the Raiders were eliminated before the Section final was 2007, when Manchester beat Watertown 3-0 in the Section quarterfinal.