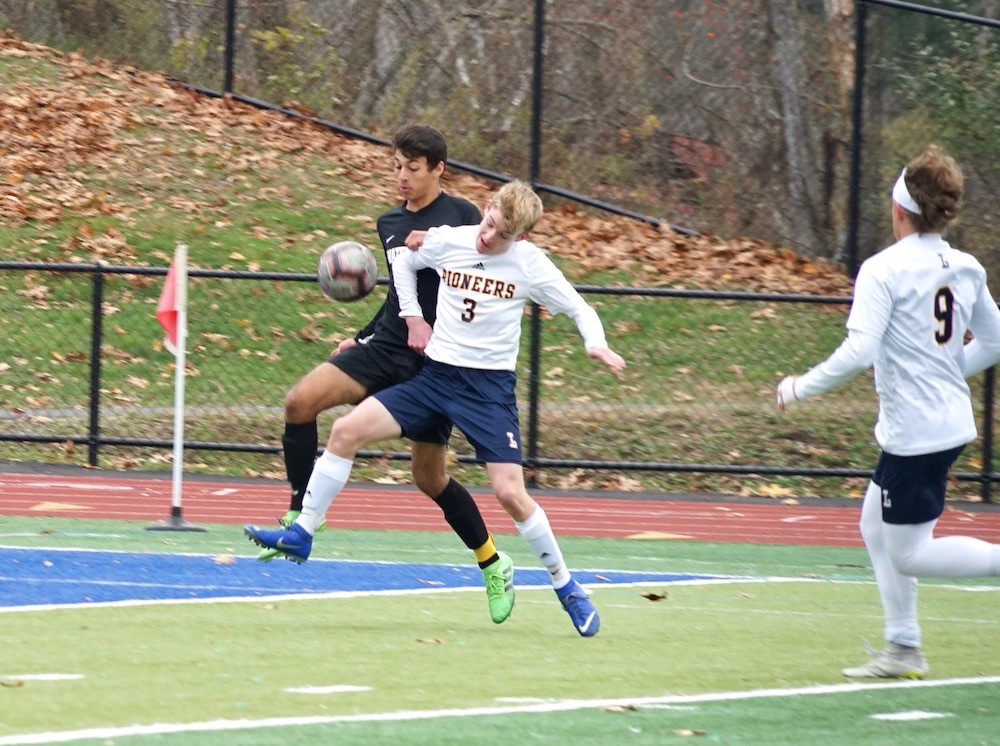 Watertown's Caiden Kiani battles for the ball in the Lynnfield penalty box in the North Section semifinal on Monday.

The Raiders came from behind to beat Weston in the first round of the tournament to win in overtime, and in the section quarterfinal against Dracut they needed overtime again to advance. During Monday’s game at St. John’s Prep, Watertown found itself in too deep a hole to dig out of.

“A lot of the same things that happened to us last year (in the tourney loss to Pentucket),” said Watertown head coach Frank Cacia. “We ran into a hot goalie who was making some great saves for them, and then we gave up that second goal — we can’t do that.”

Lynnfield took an early lead when Tommy Buston headed long throw in by Luke Martinho about 12 minutes into the first half.

With the cushion, the Pioneers played even more defensively than they started the game.

“They don’t really do much offensively. I thought we had this,” Cacia said. “They played very well defensively, especially once they get ahead. They draw a player back and we have two strikers against six of their defenders, so it was tough.”

The Raiders had their chances, with shots going just wide, or stopped by diving saves from Pioneers’ goalie Dante Gesamondo.

The game remained a one-goal affair well into the second half. With 17 minutes left in the regulation, Lynnfield freshman Alex Gentile scored on a header off of a free kick taken from deep in the corner to make it 2-0 Pioneers.

Watertown began sending more players forward and attacked for the last quarter of an hour. With about three minutes left in the game, Watertown got on the board when Nick DiPace knocked a ball into the Pioneer net off a corner kick. The Raiders had a couple chances in the dying moments of the game but could not tie the game up.

Cacia said many did not give the Raiders much hope of success when the season began.

“The outside noise was that we weren’t going to do very well because we only had two retuning varsity seniors,” Cacia said.

Watertown ends the season with a 14-5-2 record, and a Middlesex League Freedom (Small) title. They got by the team Cacia was most concerned about on Watertown’s side of the bracket — Dracut — but could not get to the Section Final, which the Raiders won in 2017.

The Raiders will have plenty of experience back for the 2020 season.

“We lose two starters, (goalie) Devon Breen and Gavork (Karapetyan), our captain,” Cacia said. “The rest are juniors and sophomores, so the future looks bright.”

Watertown and Lynnfield have become frequent tournament foes in a variety of sports in recent years. The Pioneers also ended the Raiders field hockey season this year by winning Wednesday’s North Section semifinal. Twice Watertown has eliminated Lynnfield from the boys basketball tourney — in the 2017 North Section semifinal and in the 2018 North quarterfinal at Lynnfield. And, in 2017 the Raiders football team had two late scores to comeback and defeat the Pioneers and win the Div. 5 North Section football title.