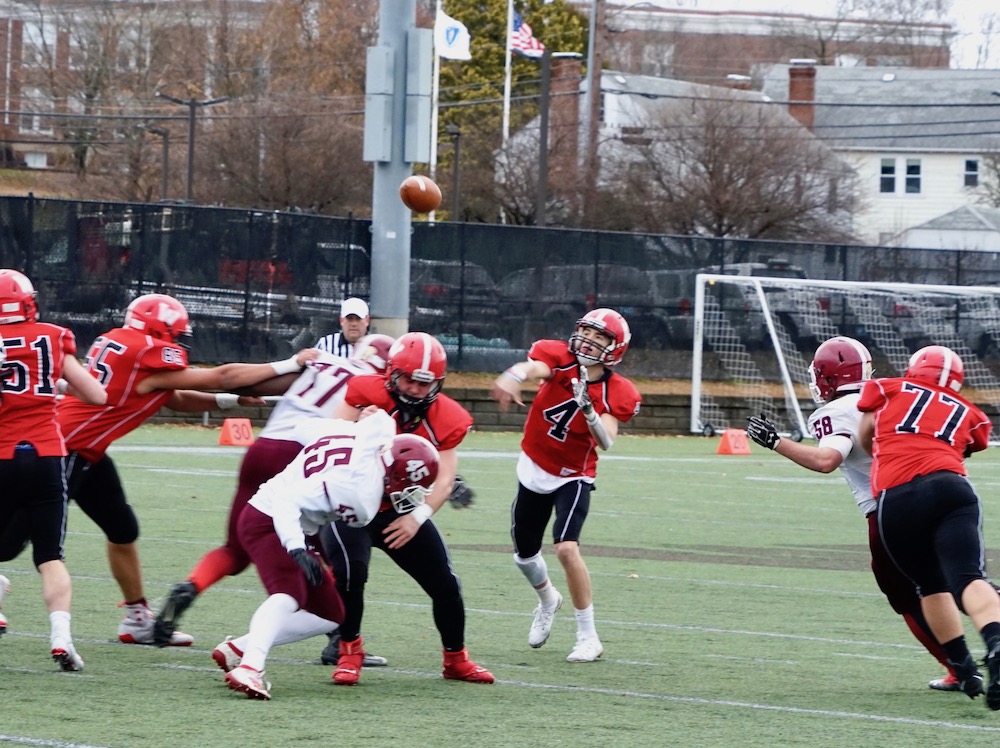 Watertown High School’s football team had Belmont where they wanted, with the ball in the opposition half and a chance to take the lead. However, in the end, the Marauders were the ones to find the end zone in the dying moments the Thanksgiving Day game.

Belmont extended its winning streak in the big rivalry game to two in a row, winning 24-14 at Victory Field on Thursday. The loss meant Watertown ended the season with a record of 5-6.

The Raiders game plan to stop Belmont’s strong running attack worked, said Watertown Head Coach John Cacace, but it was in the air that the Marauders did the damage. The Raiders focused on stopping Belmont junior running back Chad Francis.

“(Francis) is a terrific running back and we held him in check today,” Cacace said. “It was a great job  by our defense. We did what we wanted to do from a defensive standpoint.”

“We had a couple mismatches in the secondary and they took advantage  of those,” Cacace said. “I think those were the big plays that made the difference in the game.”

In the second quarter, Arno found junior receiver Preston Stephens for a 47-yard touchdown to tie the game with 2:25 left in the first half. The score came after the Raiders had a chance to extend their lead, but a first and goal from the four resulted in a missed field goal.

Midway through the third quarter, Belmont was on the move again. The driver appeared to stall inside the five yard line, but Arno hit senior receiver Zach Hubbard for a touchdown with 6:06 left. Belmont extended its lead to 10 with a field goal with 1:30 left in the third quarter.

Watertown’s offense found its grove again in the fourth quarter. After moving the ball into Marauders territory to end the third, Cook got his second touchdown pass. This time he found senior running back Karim Monroe for 18 yards, and he tiptoed untouched in for the score with 8:26 left in the game.

After stopping Belmont’s next drive, the Raiders got the ball near midfield and drove to the 29 yard line. A penalty and a sack forced a punt.

The Marauders started at their own 13 yard line, and the Raiders defense forced 3rd and 10. Arno once again made a key play, hooking up with junior receiver Matt McHugh — who was streaking down the middle — for an 87-yard touchdown with 1:50 left in the fourth. The game ended 24-14 Marauders.

Cacace said the Raiders had a good second half of the season, and he hoped to send the seniors off with a win in their final game. However, the loss meant Watertown lost all six Middlesex League games.

“We’re a small school in the Middlesex League,” Cacace said. “They have twice as many boys in their school as we do. We have to fight for everything that we get. We have a small senior class. They did the best that they could.”

Looking ahead to the future, Cacace said he had the same message for his players.

“We need to work if you want to be great. You need to put the effort in,” Cacace said. “Hopefully the guys coming back will do that, and we will look forward to them doing that.”