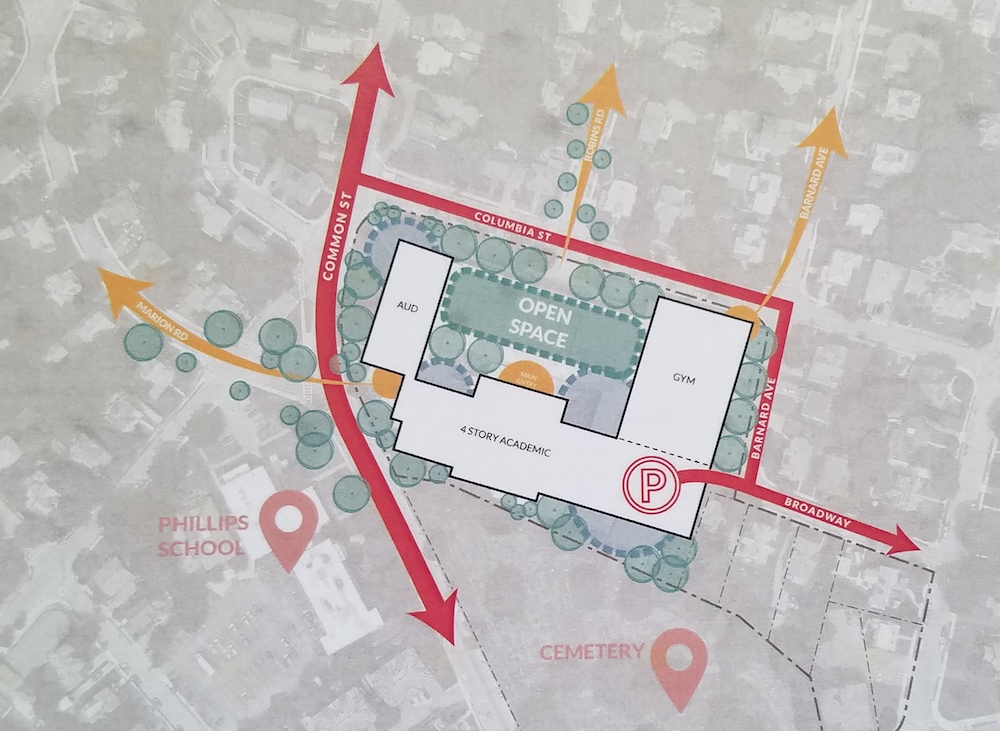 Designers showed a mockup of a new school building that could fit on the current Watertown High School site.

One of the biggest questions with the project to rebuild or renovate Watertown High School is where the building will be located.

Wednesday night, project architect Scott Dunlap, of Ai3 Architects, presented some of the options to the School Building Committee, along with some of the pros and cons of each site.

“The challenge of the Building Committee over the next three months is not to decide on the design of the high school, or even pick a location, but to identify which sites would be viable for consideration,” Dunlap said.

The current site has about 5.1 acres of space, and could be combined with the property across Common Street — the former Phillips Building.

Since there is no obvious site to move students to during a construction project at the current location, one of the biggest challenges for that site would be doing a phased construction with an occupied school, Dunlap said.

He told the School Building Committee that it would be possible. The gym, added in the 1980s, has its own utility connections, and could be demolished while the main building facing Common Street is occupied. The 1950s addition next to the parking lot could also be removed to make room for the construction of the new school.

One of the challenges of a phased construction is dealing with the hazardous materials, including asbestos, in the current high school building, Dunlap said.

Dunlap presented a drawing with a mockup of a school building, just to show it was possible to fit a new school on the property. It would have a four-story main academic building that would be built on the space where the current gym and the 1950s addition are located. In the mockup new a gym and and new auditorium would be built on the land where the main part of the building now sits.

The topography of the site could allow for one floor of underground parking at the current site, Dunlap said. Parking is a challenge at WHS, currently.

If the old Philips School building comes into play, it could be the location of a building that includes the gym and fitness areas, as well as the auditorium and music programs, Dunlap said. The main academic building would be located on the current site.

School Committee Chair John Portz asked if a bridge could be built across Common Street to link the two buildings.

Dunlap said: “If we build the school on both sides (of Common Street) it is highly likely we would have an elevated, enclosed walkway.”

The project is part of the Massachusetts School Building Authority (MSBA) program, which provides reimbursement of close to half the cost. State officials require districts to look at the possibility of renovating most of the school and making minor additions, as well as, tearing down most of the school but keeping part of the original campus. Dunlap said his firm will put together plans for these scenarios to show the cost and what kind of school it would produce. He added, that the layout of the current school poses challenges for providing a 21st Century education.

If the new high school was built on the DPW/Victory Field site, it would unite the school with the athletic facilities, which is one of the drawbacks of the current setup.

However, Dunlap said that building a school on one of the current fields would negate that advantage. The current high school site is big enough for a full-sized football or soccer field, but would not have room for a track or bleachers, Dunlap said.

Finding a new home for the DPW could be a challenge, Dunlap said, and the surrounding neighborhoods would feel the impact of a high school being placed in their area.

When looking at the DPW parcel, it also includes a section of the hill above it. Dunlap said it is steep, but could be excavated to make room for parking. Council Vice President Vincent Piccirilli said that several years ago, that section was rezoned to be park land, and is under the control of the Conservation Commission. In order to turn it back into land that could be used for the school, the rezoning would have to be approved by two-thirds of both houses of the State Legislature, Piccirilli said.

Designers used the same mockup they made for the current site and superimposed it in different locations on the DPW, and on the Victory Field Complex.

Mosley Field is 4.88 acres, close to the size of the current WHS site, so Dunlap said it would be big enough to build the same mockup high school that fits on the current High School site.

The land has no school or other large buildings on it, currently, however it is right next to Watertown Middle School. The field also serves as the outdoor space for the middle school, and is recreation space for the neighborhood.

“We would have to find something in this part of town to replace the open space,” Dunlap said.

Traffic would also be a challenge, with two large schools next to each other.

Director of Public Facilities Lori Kabel asked whether the middle school could move to the current high school site if WHS is built on Moxley Field.

“The middle school site could become recreation fields, or a football field, and we could keep Victory Field,” Kabel said. “I know it is long term.”

Piccirilli said that the recently completed window replacement at the middle school was partially paid for by the MSBA, and one of the requirements is to use the building as a school for at least 20 years.

School Building Committee member Kelly Kurlbaum asked whether the 6-acre site being sold or leased by Mount Auburn Cemetery has been considered for the high school.

Town Council President Mark Sideris said he and Dunlap took a drive down there, and found there are challenges.

Dunlap said only about 4 acres of the site would currently be buildable, while other parts would need to be regraded.

The cost would also be a hurdle, Sideris said.

“The original asking price was $25 million,” Sideris said. “My understanding is it will go for significantly more than that.”

The price of land in Watertown would make it hard to use land not already owned by the town, Dunlap said.

“Because land is so limited in Watertown, it goes for $4 million to $10 million an acre,” Dunlap said. “We have never seen numbers like that, but we have never worked in a town so small and so close to Boston.”