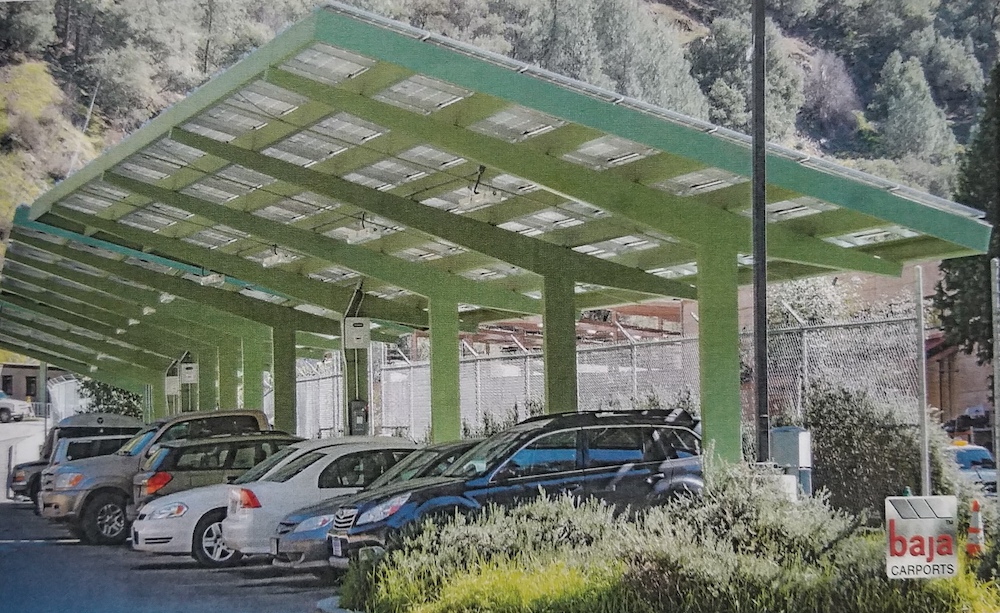 An example of a rack that holds photo voltaic panels. Similar racks are planned to go in the parking lots of Hosmer and Cunniff schools in an effort to generate electricity.

Architects designing Watertown’s new elementary schools are searching for enough space to place solar panels to make them net zero energy schools, however the biggest challenge to meeting the energy efficiency mark could be the project budget.

Lowell School will be renovated, so designers are not seeking to make the school net zero.

School Building Committee member Kelly Kurlbaum noted that the budget for solar panels only covers about half the cost.

Dunlap said there is $3.2 million for the solar panels, and the project budget has $2.6 million in a discretionary fund that has not been earmarked for anything.

Kurlbaum said she would rather not spend all the discretionary funds on PV panels.

Brian Hebeisen, a member of the Watertown Environment & Energy Efficiency Committee (WE3C), said he thought that the School Building Committee made it a goal to building net zero schools.

Town Council President Mark Sideris, chair of the School Building Committee, said that some decisions will have to be made with the project budget.

“Clearly, in this budget we don’t have enough dollars to do this,” Sideris said. “The goal is still net zero. The committee has to decide. Something has to give.”

The schools do not have enough space on their roofs to place enough solar panels to generate enough energy to cover the amount of energy used by the school, Dunlap said.

“After taking input from the town, the Building Committee and the Sustainability Subcommittee about where the PV could be, we looked at where they would be the most effective without impacting sight corridors and the site line to the school,” Dunlap said.

At Hosmer, the building will have 994 panels on the roof, in the plan he presented to the School Building Committee. Another 1,050 panels would be needed to create the 958,000 KWh of energy, which is more than the 950,000 KWh that is anticipated to be used at the school.

The plan would put panels on racks in parking areas, Dunlap said. Three sets (for a total of 630) would be in the parking areas just east of the school. Another 420 would be built on two sets of racks on the parking area at the corner of Boylston Street and Mt. Auburn Street.

School Committee Chair John Portz asked whether they could be placed near the path that runs on the side of the school next to the Ridgelawn Cemetery. Sideris said since the cemetery is also owned by the Town, there is a possibility of putting panels on that property, too, as long as it is not disturbing burial plots.

The racks would be on a “V” mount with most of the rack over the parking area, but some overhanging the sidewalk.

Lori Kabel, the town’s director of Public Facilities, said she is worried about how the lots would be plowed when it snowed.