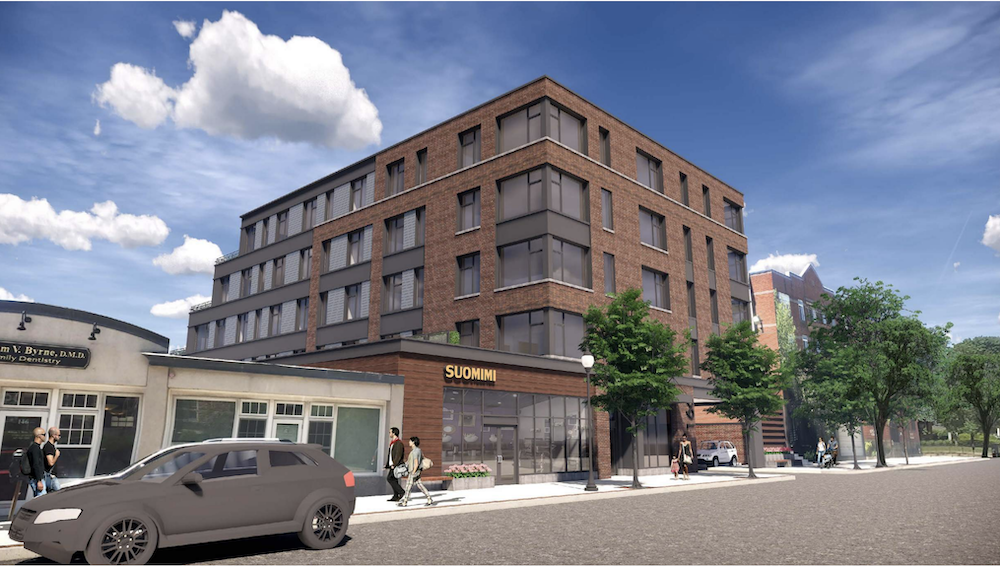 A view of 164-166 Main Street, a five story apartment building with a commercial space on the ground floor.

A new building will be added to Watertown’s skyline near Watertown Square after the Zoning Board of Appeals approved a five story apartment building on Main Street.

The approval of the project at 164-166 Main Street was made Wednesday night. The site used to be occupied by a convenience store (Store 24 then Tedeschi’s and briefly 7-Eleven) and sits across from Town Hall.

Eugene Pyatkovsky, resident of the four story building next to the project, complained that he and others in the building will be losing their views when this building goes up.

“There will be a big shadow from this building to our building. My unit will face this building,” Pyatkovsky said. “Now, I have very beautiful view of sunset. Instead this view … people will be staring in my window.”

SantucciRozzi noted that because the proposed project is farther off the property line than the required 10-foot setback, the board could not deny the project due to the closeness of the buildings.

ZBA member John Gannon said he thought the building, at five stories, is too tall for the area. He noted that building next door is four stories. Architect Eric Brown said that there are buildings six to eight stories high in the area.

“The zoning, I think, anticipates greater density in Watertown Square, not having the one-story, pancake-y buildings,” Brown said.

Gannon cast the lone “no” vote due to the height, but said otherwise he liked the design.

Robert Michaud, from MDM Traffic Consultants, said that a quarter of the residents of the surrounding area (which includes the condos in Hamilton Place) often use public transportation to get to and from work. He added that the building is located near seven MBTA bus lines. He also cited a study of communities in the Boston area, including Watertown, which found that 30 percent of residents do not own cars.

The parking spaces will be “unbundled” from the apartments, meaning tenants do not have to rent a space if they don’t have a car, Michaud said.

The project will join the Watertown Transportation Management Association (TMA) and take steps to reduce the number of people using cars.

A resident who rents a multi-family home on Walnut Street with no off-street parking told the ZBA she has had trouble finding people looking to rent who don’t have cars.

Gannon wondered what would happen with visitors, vehicles making deliveries or contractors doing work at the building. Michaud said a parking study of Watertown Square found that at most times 6-10 street spaces are available in the blocks near the building. Also, the commercial parking spots will be available after 6 p.m. when many visitors come by. The ZBA made a condition of the approval requiring the commercial spots to be vacant after 6 p.m.

Member Francis Goyes Flor said she likes the fact that the parking will be unbundled, and that the building would have 34 secured bicycle parking spaces. Member Michael Brangwynne encouraged the owners to provide incentives for residents not to have a car, such as offering free CharlieCards to ride public transportation.

The project will have five units that will be rented at below market rates.

Resident Dennis Duff said he would like to see Watertown residents have priority when the affordable units are filled. Currently, the Town does not have a preference for Watertown residents, but SantucciRozzi said developers could request the 70 percent of the units have a local preference by applying to the state Department of Housing and Community Development (DHCD).

Bill York, attorney for the developers, said they would ask DHCD to allow the local preference.

ZBA member Kelly Donato wanted to assure that people in affordable units have the same opportunity to rent the parking spaces. York said they would have the same chance to get parking as other tenants. SantucciRozzi said the developers should hold back 2 to 3 spaces in case the affordable units are not filled until after the other apartments are rented because it can take a longer period to hold the lottery to fill affordable units than renting market rate units.