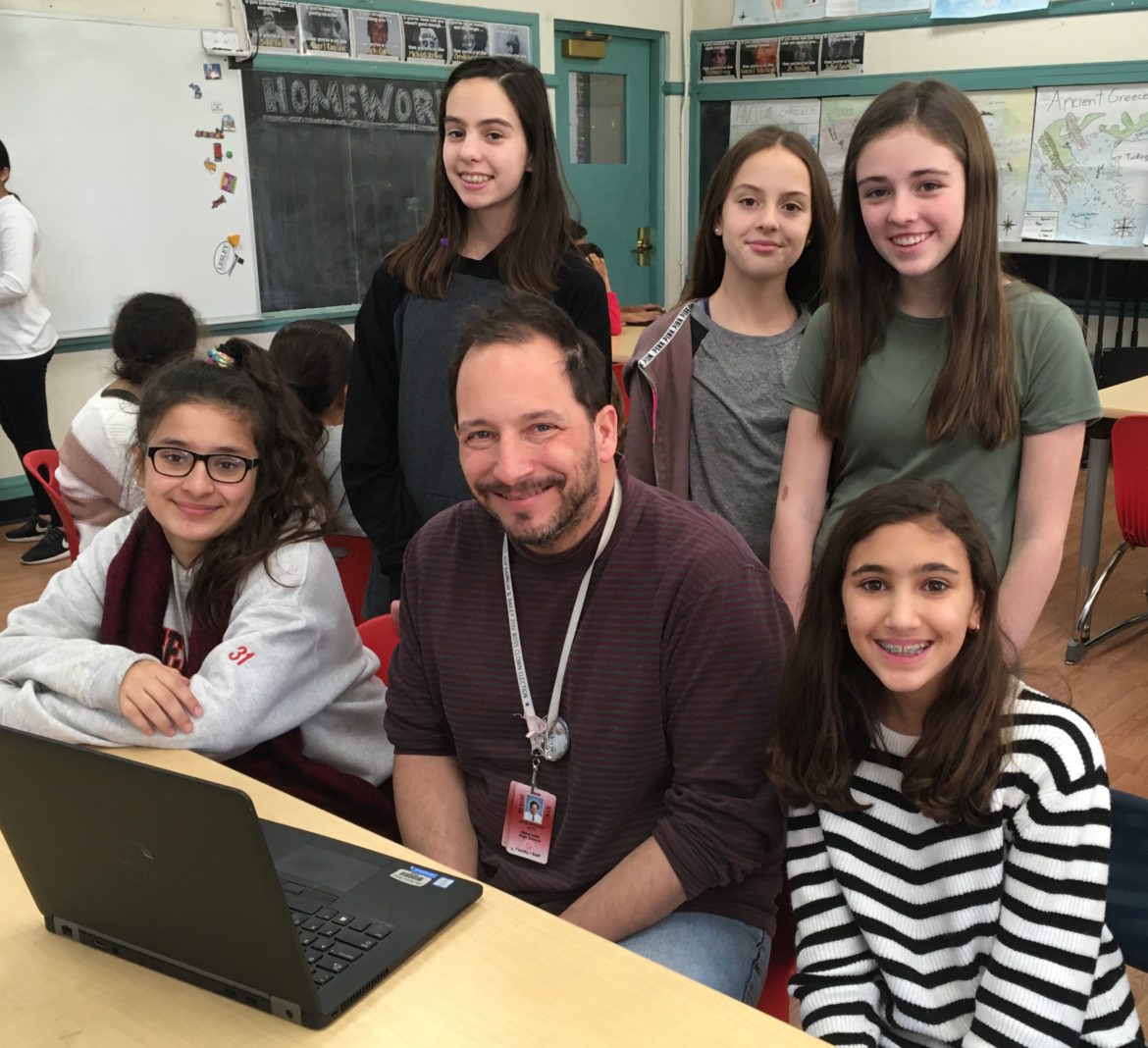 John Vitti, center, will receive a Community Service Award at the South by Southwest festival in March for his work with school newspapers in Watertown and many other communities. Here he is shown with students on Watertown Splash, the newspaper at Watertown Middle School.

John Vitti’s professional life has been all about journalism, and since his children’s elementary school days he has shared his love and knowledge for reporting with students in Watertown.

An editor with the Boston Globe, Vitti helped create the school newspapers at all five of Watertown’s public schools, and his venture now stretches more than 125 schools around the Boston area. For his work, he will receive a Community Service Award at South by Southwest Conference in Austin, Texas, in March.

Vitti grew up in Newton, but settled in Watertown where he and his wife raised two daughters.

After college, he started to work for the News Tribune covering high school sports in 1986, and even covered Watertown High School’s first field hockey championship during coach Eileen Donahue’s first year. In the fall of 1988 he moved over to the Boston Herald, and in 1999 he got a job at the Boston Globe. Today Vitti is a multi-platform editor with the Globe, where he lays out the newspaper and edits stories and posts them to the web.

His venture into school newspapers began in 2007, when he helped create Cunniff Kids News. The idea came to Vitti when he was helping his daughter with a writing assignment for school. As Vitti thought about what was needed for a good essay, “I realized what we are talking about is journalism,” he said.

Now Vitti lends a hand with the school papers at Watertown’s three elementary schools, the middle school and the high school. The students write about typical issues of interest to students, but they also get the opportunity to do stories that professional journalists cover, such as movie reviews, covering sporting events and even speaking to presidential hopefuls.

Last year, two of the presidential candidates, John Delaney and Wayne Messam, visited Watertown High School, where students had the chance to ask them questions.

Vitti has built up relationships with people doing publicity for theater, cinema, sports and more in the Boston region.

One opportunity allowed for students from 10 different classes/schools to interview Lauren Patten, who is appearing in the Broadway musical “Jagged Little Pill.”

“We  had a video interview with a Broadway performer,” Vitti said. “They worked on their interviewing skills and note taking and story structure and writing a strong lede. We did it on a video conference. It was was fantastic, and it didn’t cost a thing.”

Through his connections Vitti is able to bring in guests to the schools, and get access to events such as the gymnastics and figure skating nationals when they took place in Boston.

“The Globe, the Times and CBS are there — the more the merrier. The job is the same,” Vitti said. “All the Olympians. they love to talk to the kids. And all the people we work with are confident the kids can handle themselves responsibly.”

A few of his students have been inspired by their time working with the school newspapers in Watertown. The oldest kids have graduated and are in college. One student he has kept in touch with, Amin Touri, went on to cover sports for his college paper. He is now the editor in chief of The Daily Collegian at UMass Amherst.

The idea to expand to Watertown Middle School came up at a Site Council meeting during the 2008-09 school year, Vitti recalled, when the subject of student writing came up.

“I said to (then Principal) Kimo Carter, here’s what we are doing at Cunniff, do you want to do a newspaper,” Vitti said. “He said, ‘Yes!’”

WMS now has a newspaper elective, and this year 19 students work on Watertown Splash, Vitti said. The lead teacher is Jim Kirkcaldy. In the fall of 2013, Vitti branched out to the high school.

“The person doing journalism at the high school left and it made sense to expand there,” Vitti said.

Three years ago, Vitti officially became a teacher at Watertown High School. He got his license to teach and runs one class each semester. The number of students varies by semester, but currently he has 13 in the class. The number participating in the WHS paper, the Raider Times, in some manner or fashion each year is about 150 students. He estimates about 100 students are involved in the paper at the middle school and three elementary schools.

He did not stop there, however. Through connections he made through school newspaper conferences, Vitti has gotten other schools to join his efforts. The other schools can join in the events and other opportunities in which Vitti has arranged.

Vitti said he believes a school newspaper can take many forms, and all schools benefit.

“Any school can start a newspaper, any kind of program: a class, an after-school club, a segment of a class,” Vitti said. “All will benefit from it. Schools get the student voice. The students say what’s important to them.”

The students learn skills that will be useful to them, whether they go on to be a reporter or not, Vitti said, and it is not as complicated as some may think.

“There’s not a lot of mystery,” Vitti said. “What’s interesting to you? You have to spell the person’s name right. I teach them about who, what, where, when, why, how. Any kid can participate. Any background. Any community. Any school. They learn to interview people. They work with others. They learn about being better students.”

With his network growing, Vitti realized he needed a way to raise seed money and enable him to do things that he could not as a newspaper editor or high school teacher, such as running camps and other events. Over the summer of 2019, Vitti began the paperwork to create the non-profit organization Headliners in Education.

The South by Southwest Community Service Awards will be presented on March 14. Vitti said he is not sure who nominated him for the honor. He returns to Austin after giving a talk about newspapers in schools at the 2019 SXSW.

2 thoughts on “Watertown Journalist, Teacher Being Honored at South by Southwest”