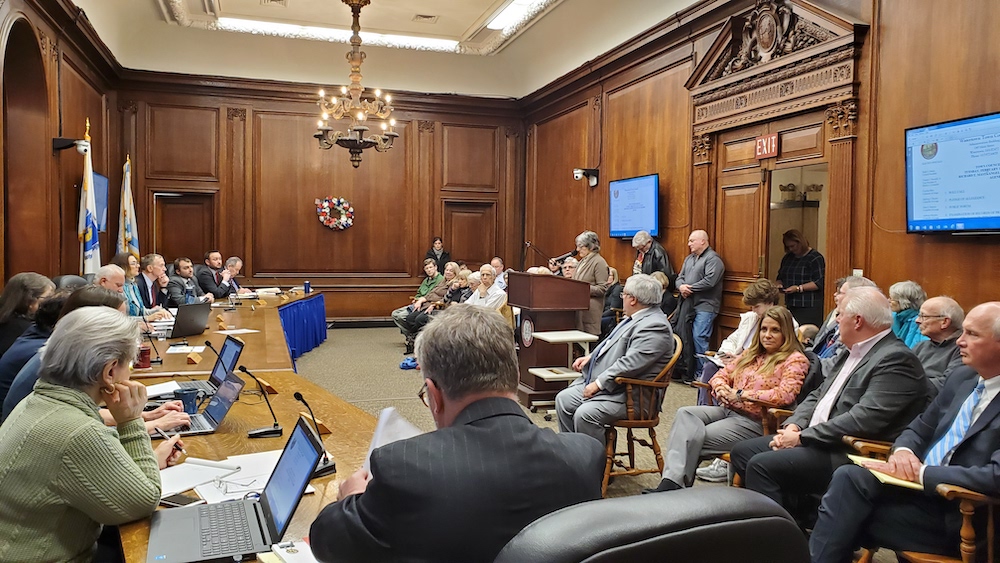 The Town Council Chamber was filled with residents there to hear about the decision on rezoning parcels along Galen Street. Developers are interested in building biotech lab buildings on the site south of the Charles River.

Residents concerned about the impact of a proposal to change the zoning for properties along Galen Street jammed the Town Council Chamber Tuesday night. The change paves the way for a biotech lab project to be built on east side of Galen Street on property that includes for the former Colonial Buick GMC dealership.

After hearing from the public during public forum, and then having a 1.5 hour discussion of their own, Town Councilors voted 8-1 to approve the zoning change requested by the owners/developers of the property. The change is just the first step in the process, and a project will have to be submitted to the Town and go through multiple community meetings, and go before the Planning Board before ultimately being decided upon by the Zoning Board.

Tuesday was the second time that the project came before the Town Council, after Councilor Lisa Feltner used her Council Privilege on Jan. 28 to delay the vote until the next Council meeting. In between the two Council meetings, Feltner hosted two meetings to hear from the public and to address their questions. The first drew nearly 50 people, and other second had about 30 attendees.

At the Jan. 28 meeting, the developers — Boston Development Group — presented some potential ways the property could be developed if four parcels of land (70, 78, 84-86, and 88 Galen St.) are rezoned from Limited Business to Industrial 2 (I-2) in the Watertown Zoning Ordinance. The plans showed two life science buildings could be built, along with a 25,000 sq. ft. park on the property next to the MBTA bus yard which is also near the Charles River.

The zoning change would allow for taller buildings to be built on that portion of the land because I-2 allows for five stories, compared to four stories in a Limited Business district.

After hearing from residents by phone, email and at Tuesday’s meeting, Town Council President said they had made their sentiments clear. Sideris thanked everyone for reaching out to the Council and for attending the meetings that Feltner hosted. He added — after it was clear that the zoning amendment had enough votes to pass — that people won’t like the decision, and said he too supported the change.

“I am going to support this because I feel that this is going to give us an opportunity to develop an underutilized section of Galen Street — I’m going to call it a blighted area of Galen Street, because there are some properties there that are not very well maintained or taken care of,” Sideris said.

The parcels Sideris referred to as blighted are the properties that are zoned Limited Business. Two are business that have closed (Valvoline oil change and the U.S. Petroleum gas station) as well as two vacant homes, one which had a fire several years ago and was never repaired.

“I said all along it is exciting, I am glad they are here, it makes sense to develop it as one parcel,” Feltner said. “But, I don’t know why we would have the visioning sessions, the community process after the fact, after we give up the leverage.”

Councilor Anthony Donato said that one reason he supported the zoning change was that the developers could still do a similar project without the zoning change, but the project would be more disjointed because of the two different zones in the parcel.

Councilor Tony Palomba repeated what he said at the previous meeting, that the Town is putting trust in the developers to listen to the public’s concerns and make that a part of their proposal. He thanked those people who wrote letters, came to speak and expressed their concerns and opinions.

Some Councilors said that many of the residents they heard from were either confused or misinformed about what Tuesday’s vote on the zoning change would do.

Once the project is submitted to the Town it will have to go through multiple steps before being approved, said Assistant Town Manager Steve Magoon, who is also head of the Community Development and Planning.

First they must have multiple meetings with the staff of the Town’s Planning Department where they will get feedback on the project. Then they will have a Developers Meeting with the department heads (including Public Works, Fire and Police) to see if they have concerns. Next will be at least one community meeting where they present the project to residents, including nearby neighbors who will receive a notice about the meeting. After that, the project will go through public hearings before the Planning Board and finally the Zoning Board, which gives the final approval.

Sideris said that there will be multiple opportunities for the public to give input on the project, and added that the developer has agreed to go beyond the normal requirements.

“There are many many meetings to come,” Sideris said. “I did request and have gotten commitment from the owner that we are going to do as many community meeting as possible.”

Councilor John Gannon, a former Zoning Board member, encouraged residents to continue to stay involved and give their input at each part of the process.

“I urge everybody to show up at these meetings. That’s where input is taken,” Gannon said. “And I think being on the Zoning Board, more often, the fourth body to consider a plan, but I think people may get burned out. They may think, I go to one community meeting and give my input, then they show up for the Planning Board, they think they’ve given their last input. Then the Zoning Board really makes the decision — the Zoning Board meeting is the ultimately important meeting.”

Councilor Caroline Bays said she spent the last two weeks looking at the project and listening to residents concerns. She said the time was “enlightening and informative,” but she said she did not change her position on supporting the zoning change.

“The vast majority of the concerns have nothing to do with this project,” Bays said. “It seems like there are issues around communication, process and planning. I hope we can start to address those.”

Many residents said the process seemed backward, with the zoning amendment being approved before people know what will actually be proposed for the property.

Magoon said that the Council cannot set requirements for a project as part of approving a zoning change.

“The idea that the Council would say we’ll grant you the zoning amendment if you provide certain things really amounts to contract zoning, which is not appropriate, not legal,” Magoon said. “What we do through the development process, when the project is in front of the town then we talk about mitigation strategies to offset the impacts of that development. That wouldn’t be appropriate to do at this point in the process. I understand that is frustrating for some people. I’m sure its frustrating for the Council. I’m sure you’d like the opportunity for that bite of the apple.”

At the meetings hosted by Feltner, many residents said they were interested in having the Council find a way to delay the decision so that more planning could be done so the Town could come up with a vision for the area, using input from residents.

Magoon said that it was possible to put a moratorium on development across Watertown, or in a specific area of town. He said it would not stop the development, but would give the Town time to address specific zoning or planning issues related to the area.

Another discussion was whether the town’s major planning document, the Comprehensive Plan, is out of date. Some residents asked for the Council to delay the vote so that document could be updated.

Magoon said that the document was approved in 2015 and such plans are meant to last for 20 years, so he did not think it needed to be totally redone. He acknowledged, however, that five years after being approved it may be time to revisit the plan.

The traffic jams on Galen Street topped the list of many resident’s concerns about the project. Council Vice President Vincent Piccirilli said traffic has been an issue for more than a century, noting that in 1890, properties were taken by the state by emminent domain so that Galen Street could be widened from two lanes to four and to widen the bridge over the Charles River, and created a rotary in Watertown Square.

“That was before there were cars. That’s how bad the traffic was,” Piccirilli said. “You can never make the traffic go away. What you can do, what you have an opportunity to do is have a developer spend their money on property they bought to do something they will be proud of and you will have influence in.”

Many residents complained that they had not heard about the proposal to change the zoning, or that a developer is planning to build biotech labs there, until the issue reached the Council, or even not until after Feltner tabled the vote.

Woodland said that the proposal to change the zoning had been out there since the late summer or early fall when the Council first voted to refer the amendment to change of zoning to the Planning Board. Then it was discussed by the Planning Board during a public hearing. The amendment then had a first reading in November 2019, before the public hearing was held on Jan. 28. He noted that the information was on the Town’s website, along with Zoning Ordinance, which lays out what is allowed in each of the zones.

Resident Elodia Thomas noted during the public forum at the beginning of the meeting that the most recent Planning Board meeting minutes posted on the Town website was in September, but the discussion of the Galen Street zoning change was in November. Feltner said that when agendas are posted, they often do not have the links to the reports or background materials.

Palomba said that he does not think that residents should have to understand the details of the Town’s zoning ordinance, nor keep track of everything going on in town. However, he recommended that the Town host meetings aimed at teaching the public about topics such as the basics of planning and how the process works. He would like to see other other subjects covered, such as how properties are assessed and how tax rates are set.

Sideris said that the Council created a subcommittee last year to look at ways to improve communications with residents. He acknowledged that the communication with the public could be improved. In this case he plans to go a step further.

“I have also gotten a commitment to do things a different way this time. We are going to mail a postcard to everyone on the Southside to let the know about when the first community meeting is going to be.”

The meeting will not take place until after the project has been officially submitted to the town, which has not happened yet.