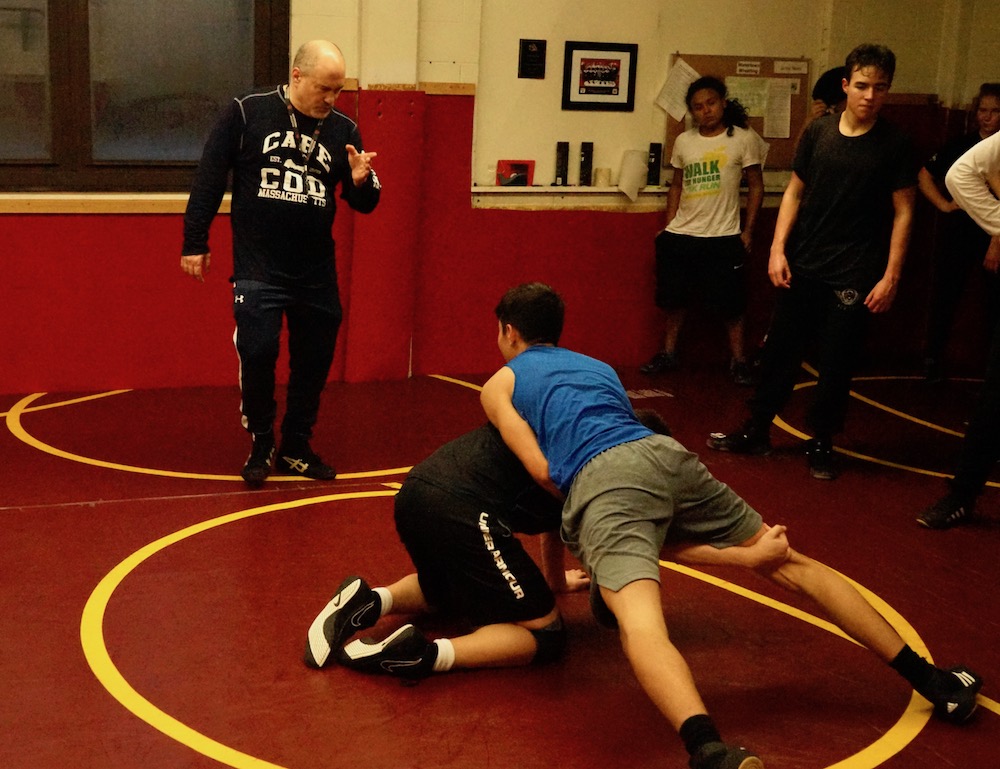 Wrestlers get pointers from WHS Wrestling Coach Kevin Russo at a recent practice.

The Watertown High School wrestlers hung with some of the best in the region at the MIAA Div. 3 Central Sectional Meet, with two wrestlers taking third place, and three qualifying for the Divisional Meet.

Watertown finished sixth overall with 115 points at the meet at Holliston High School on Saturday. Wayland won with 248.5 points. The Raiders had a successful regular season, finishing 21-8 in the dual meets.

After losing his first match in the 152-pound division, junior David Manoukian went on a four-match winning streak. He won the third place match 7-2 and secured a spot in the Division 3 Meet on Feb. 21 and 22 at Wayland High School.

Junior Sergey Davtyan recovered after losing in the second round of the 145 pound division bracket. He won the next four matches including the third place match, which he won by pinning his opponent. Davtyan will move on to the Divisional Meet.

Junior Parsa Tehrani won his first two matches in the 132-pound division, before losing in the semifinal. Then he won the semifinal for the consolation bracket and lost in the final, to finish fourth which qualified him for the Divisional Meet.

Brendan Donovan, who moved up from the 106 pound division to wrestle at 113 pounds, performed well and is an alternate for the Divisional Meet.

“Brendan placed fifth which was a big surprise given he is a first year wrestler and was wrestling up a weight class in the state qualifier,” said WHS Wrestling Coach Kevin Russo.

In the 160-pound division, junior Hrachya Tonyan recovered from a first round loss and won his next two matches before losing the consolation semifinal. He then pinned his opponent to win the fifth-place match. He is an alternate for the Divisional Meet.

Senior John Santos won his first two matches in the 195-pound division with pins. After losing two straight, he triumphed in the fifth-place match by pinning his opponent. He too will be an alternate.

Junior Sebastian Correa placed sixth in the 126-pound division. After losing his first match, he won in the consolation bracket. He fell in the fifth place match.

Jack Nicholas won his first two matches in the 182-pound division. The junior made it to the fifth-place match, where he lost and finished sixth.