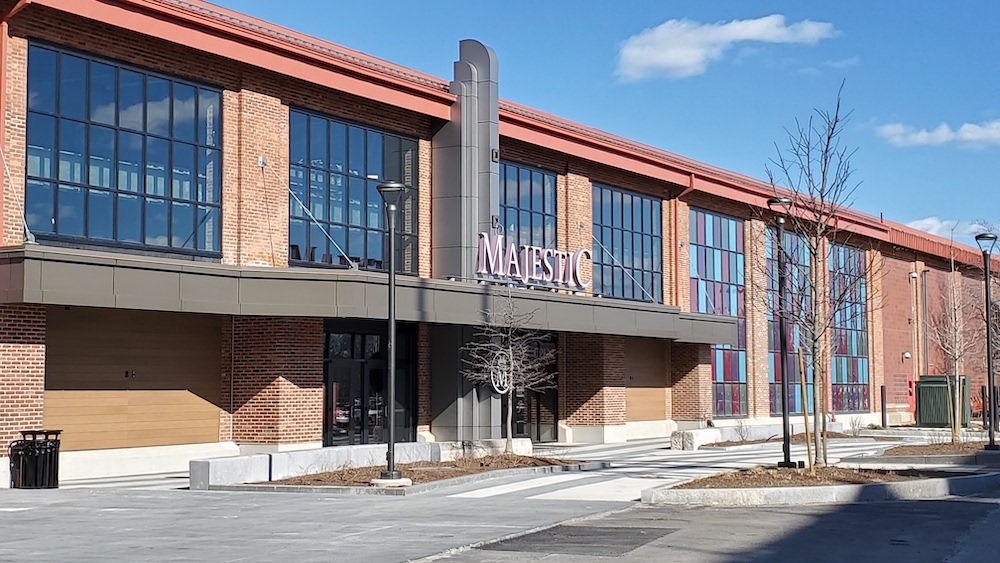 The Majestic 7 movie theaters have opened at Arsenal Yards.

Watertown once again has a place to see a movie, with the opening of the multiscreen cinema in Arsenal Yards, and diners will soon have a new option in the former Arsenal Mall.

The Majestic 7 features first run films in seven theaters, including one with a giant screen and high-tech sound. The experience is dubbed CWX and is similar to the IMAX technology.

The theater is part of the Cinema World chain, and all the theaters have reclining seats with cup holders built into the armrests. The theater has a range of food and drink options — including beer and wine.

The theater occupies part of the former U.S. Army Arsenal Building that also includes Home Depot. The entrance is on the side facing away from Arsenal Street. Tickets can be reserved online, or purchased at the theater. See showtimes by clicking here.

In years gone by, Watertown had movie theaters in Coolidge Square in East Watertown and on Galen Street south of the Charles River.

Arsenal Yard’s new restaurant, City Works, will open in mid-March and, as part of its soft opening, the eatery with dozens of beers on tap will hold an event to raise money to help area food pantries.

City Works is also hiring a variety of positions (see more below).

The restaurant sent out the following announcement:

While City Works Eatery & Pour House (91 Arsenal Yards Blvd., Watertown) will officially open its doors on Monday, March 16, Watertown diners have the opportunity to preview the newest eatery and pour house at its “First Draft” Soft Opening Charity Event on Saturday, March 14. From 6-9 p.m. guests can be the first to enjoy the full food menu and an open bar while supporting The Greater Boston Food Bank. City Works in Watertown is the third City Works location on the east coast, with others established in Tysons, Va. and King of Prussia, Pa. City Works offers guests a selection of 90 local, regional, and global craft beers on tap, with roughly 30-40 of those taps sourced locally. Beyond beer, diners can select a drink from its seasonal cocktail list or have a glass of wine on tap. The vast beverage offerings are complemented by classic American cuisine with chef-driven twists available for lunch, dinner, and weekend brunch.

Tickets to the First Draft soft opening event are priced at $45 per person, and can be purchased online here. 100 percent of ticket sale proceeds will be donated to The Greater Boston Food Bank, the largest hunger-relief organization in New England with a vision to create a hunger-free Eastern Massachusetts by the year 2028. Since 2016, Bottleneck Management has raised over $43,000 for non-profit organizations with its “First Draft” soft opening events throughout the country.

City Works in Watertown is hiring for back-of-house and front-of-house positions, including servers, bartenders, support, line cooks, prep cooks, and dishwashers. Interested applicants are invited to apply online at: https://www.cityworksrestaurant.com/watertown/join-our-team/.

Reservations can be made here