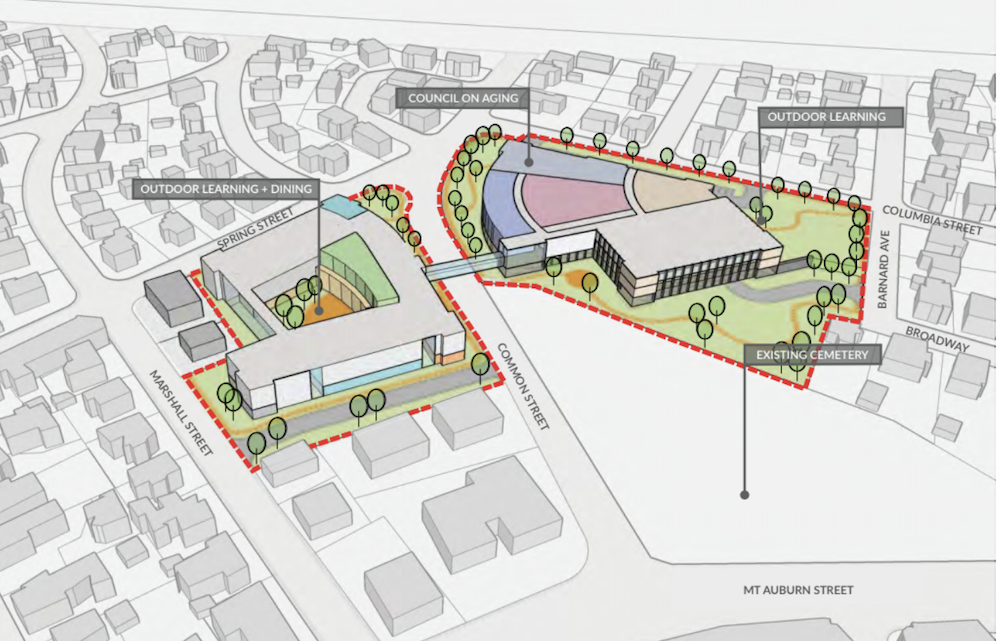 An illustration of how Watertown High School could be built on both sides of Common Street. In this scenario, the main academic building replaces the former Phillips School, while the gym, auditorium and Senior Center go on the current WHS site.

The current site and the Victory Field complex will be the two sites considered for the location of the new Watertown High School, but not Moxley Field or other properties in town.

In prior meetings, the architects have presented mock ups of what a new school could look like on various sites, but Dunlap said that was just for demonstration. He added that the vote by the School Building Committee only is about sites to be studied further for their potential as locations fo the school.

The vote, however, did eliminate Moxley Field, next to Watertown Middle School, as a possible location for the school.

“For a variety of reasons we will not study Moxley Field: too little space, it’s smaller than the existing high school property, displacement of existing recreation and green space with no way to replicate them,” Dunlap said.

The remaining locations are the current high school site on Columbia Street (which could be combined with the Phillips School property across Common Street), and the Victory Field athletic complex on Orchard Street.

Some residents at the meeting expressed their opinions for or against certain sites.

Watertown Recreation Director Peter Centola said he likes the option that includes building a recreational facility, including a gym, on the Victory Field site for the high school to use when the current gym is knocked down to make way for the new school.

Libby Shaw, president of Trees for Watertown, said her group and others in town oppose using some or all of Victory Field for the high school because it would mean losing green and outdoor recreation space. She notes that Watertown has only 3.7 acres of parkland and outdoor recreation space per 1,000 people, which is about one-third the national recommendation for healthy cities.

“We recommend Watertown build our new high school in the current location, rather than eliminate scant, precious, well-cited, well used and critically important green space,” Shaw said, reading from a letter from Trees for Watertown.

Resident Ann Marie Cloonan asked if there would be any difference in the program that could be offered at the two sites.

“Will we be able to offer more to the kids on that Victory Field site?” Cloonan asked.

Dunlap said the educations programs will be comparable.

“In terms of the the physical building program, it will be the same as far as we where we build,” Dunlap said. “The MSBA not allow us to compromise the program to fit one site or the other.”

Resident Douglas Hood asked whether having a footbridge across Common Street to link the current site with the Phillips site is best, or whether they have considered rerouting Common Street and using that space to get the most out of the location.

“Taking on a project of this scope for the entire school system going forward, are you trying to get the school system to move to a higher level?” Hood said. “One of the considerations we have is do we stay in Watertown or do we move to another community with a much better track record for schools. If this is going to put us in the higher category with higher performance and better results, then we would want to stay in Watertown. I don’t think I am alone in this.”

Dunlap said he has had discussions with the Town’s engineers and traffic engineers about the idea of using the Common Street land, and said there are some major challenges. Discussions could come up again as they go further into designs.

He added that he and his firm have lots of experience working on education projects, and can be selective in the projects the work on.

“All the directions we’ve been given from the Building Committee and this Town — even starting with the elementary schools — was to do whatever we can do to do the right thing for educations,” Dunlap said. “This committee’s direction is to keep a very open mind with the options, with regards to any possibility. If we didn’t think we could design something amazing, we wouldn’t be here.”

Council Vice President Vincent Piccirilli noted how the School Building Committee also oversaw the design of the three elementary school projects. They evolved greatly from when the designs started, moving from renovations of three schools to building two new schools and renovating the third with some additions.

“We will apply those same process to the new high school and we will come up with something that is really innovative and exciting for the community,” Piccirilli said.

“We have excellent teachers in the high school and we have amazing students and right now the our building is limiting our ability to maximize what we already have,” Galdston said. “By having a state of the art 21st Century high school we will be able to ensure we are a top rated, top notch, excellence in all aspects. Not just our great teachers and great students, but our building as well.”

Susan Jones, who lives right near the high school on Broadway, said had not heard about the project until recently and wanted to know how to get more information.

“If you don’t go to Victory Field, my house will be impacted. I need to be able to think ahead,” Jones said. “I’m not against the school. I need to think about how it impacts me and my husband. Should we be thinking about senior housing? Should we be moving?”

Town Council President Mark Sideris, who chairs the School Building Committee, said there will be a series of meetings on the high school, the first later in March. He said efforts will be made to contact neighbors.

Owners Project Manager Tim Bonfatti said the next forum will be at 6:30 p.m. on March 26 in the Watertown High School Auditorium.

“We will provide more of details about we are exploring … we will be talking more specifically about the options,” Bonfatti said.

Along with the possible sites, the documents sent to the MSBA includes the education vision for the new school, and a space summary, said Project Architect Scott Dunlap from Ai3.

“Essentially it is a first pass at the spaces that will be in the new building,” Dunlap said. “We are being conservative at this time, to make sure have everything is in there that the school staff, school administration would want to be in there. It is hard to increase what’s in there, but the MSBA will not have prob with reducing it.”

The study in the next phase will also include looking at renovating the current school and possibly adding on to the school.

“We have not rejected it, but we are anticipating that it is going to be prohibitively expensive and very complicated as a project,” Dunlap said.

The vote on the specific site is due to the MSBA by September, Sideris said. He added there will be several meetings and forums before the decision is made.