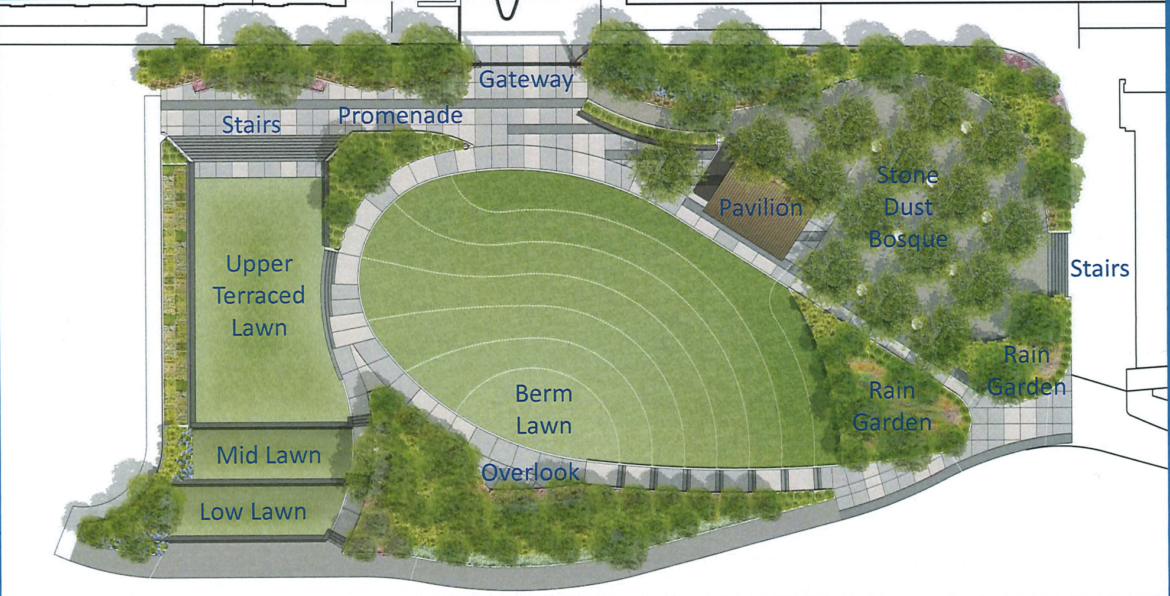 A drawing of the proposed renovation for the eastern section of Arsenal Park, near the Arsenal Yards development.

The Town Council will be asked to consider funding a $1.65 million renovation of a section of Arsenal Park, but the Town will get some help paying for the project from a grant and mitigation money from the next door Arsenal Yards project.

The Town received a $200,000 Housing Choice Capital Grant, which will be applied to the first phase of the Arsenal Park project, along with $500,000 in mitigation funds paid by Arsenal Yards developers Boylston Properties, Town Manager Michael Driscoll said.

He added the construction bids may come in lower due to the economic downturn caused by the COVID-19 outbreak, so the might be lower than the original $1.65 million budget.

The Town Council voted unanimously to let Town officials put the project out to bid. Request for bids will go out soon, and bids be opened in June, Driscoll said. The Council will then be asked to approve funding for the project, with a first reading expected on June 23, and a public hearing and vote on July 14, Driscoll said.

Construction could start in August and be completed by October, Howard said.

Phase 1 will renovate the eastern end of Arsenal Park, where there is currently some tennis courts and tennis practice walls. It will be transformed into a space for passive recreation, said Glenn Howard, project designer with CDM Smith.

The renovation will create a large oval-shaped and gently sloped grassy area, known as the Berm, which sits in the middle of the area. To the northeast of the Berm will be the Bosque, which will have dozens of trees to provide shade over a stone dust area where picnic tables will be installed. To the west of the Berm will be a three-level terraced lawn, which will sit next to what will be the future location of the community garden.

The east end of Arsenal Park will be linked with the new Rivergreen promenade through Arsenal Yards. A gateway with a steel girder on top of two brick columns, will mark the beginning of the park, Howard said.

Right next to to the Berm, on the edge of the Bosque, will be a pavilion.

“The pavilion, the Town if it wants in the future, can hold events. It can act as stage for performances,” Howard said.

Pathways will go around the area, including around the Berm, between the Berm and the Bosque, and will link to the terraced area. The paths will link to the rest of the park, as well as to a stairway going down to the are near the Charles. This pathway will be built near the life science lab tower on the Arsenal Yards property.

The pathways will be lit with bollards that shine down onto the pavement, Watkins said, which means they meet the Dark Skies standards.

“Shoppers will be walking around, we are talking about folks, workers on lunch break, which means that stone dust, no matter what you put on it will adhere to their shoes and track it around,” Kounelis said. “I think you need to be looking seriously at all options for what will be a high traffic area.”

Councilor Lisa Feltner asked whether the new facilities would be handicap accessible, including the pathways and the picnic tables.

Howard said that the pathways will allow people in wheelchairs to access the Berm, the terraced lawns and the Bosque, and a chair can be removed from the tables to allow wheelchairs to pull up to them.

Also being installed in phase 1 is an irrigation system and a stormwater treatment system — including rain gardens — which will allow almost all the rain that falls on the area to percolate through the soil rather than going into the storm drains leading into the Charles River, Watkins said.

The rest of Arenal Park will be renovated next year, including the large grass area, the playground, the rest of the courts and the skate park.

Former Recreation Department Director Tom Sullivan wrote a letter saying that he believes the park is in need of sprucing up. He pointed out that the grass area has been eroded in some places, there are broken tree limbs, a bent basketball pole and depressed walkways. The walkways could even be a safety concern, he said.

“Arsenal Park, once the jewel of Watertown’s open spaces, has lost its luster,” Sullivan wrote.

A fourth grader named Dante also wrote in to say that he has played soccer at Arsenal Park for two years, and the field is in some need of repair.

“It has bumps and holes that hurt your feet. It goes down hill from the parking lot, making the opposing team go up hill, and patches of dirt that make the ball bounce poorly,” Dante wrote. “I want the Council to put patches where the dirts is, straighten the bumps, and the holes you can fill with dirt and grass.”

Town Planner Gideon Schreiber said that improvements will be made to the grassy area. However, the park is under the control of the Watertown Conservation Commission and the commissioners do not want to turn it into a formal sports field. Some of the bumps are caused by tree roots, which will not be removed, and the natural slope of the field will remain.

The other phases remain at a 25 percent planning stage, Howard said, but plans call for a number of changes, including: building an updated and enlarged playground, improvements to the spray park, a new formal gateway entrance, improvements to the driveway and a multimodal bike path going through the site which will link Arsenal Street with the Charles River Path.

Also, the existing amphitheater will be converted into a small play area, Howard said. There will be two basketball courts, three tennis courts, a skate park, a community garden, plus new landscape amenities and tables, Howard said.

Driscoll said that plans for the other sections of the park will be presented in 2021 with the intention of bidding and doing the renovations during the same calendar year.