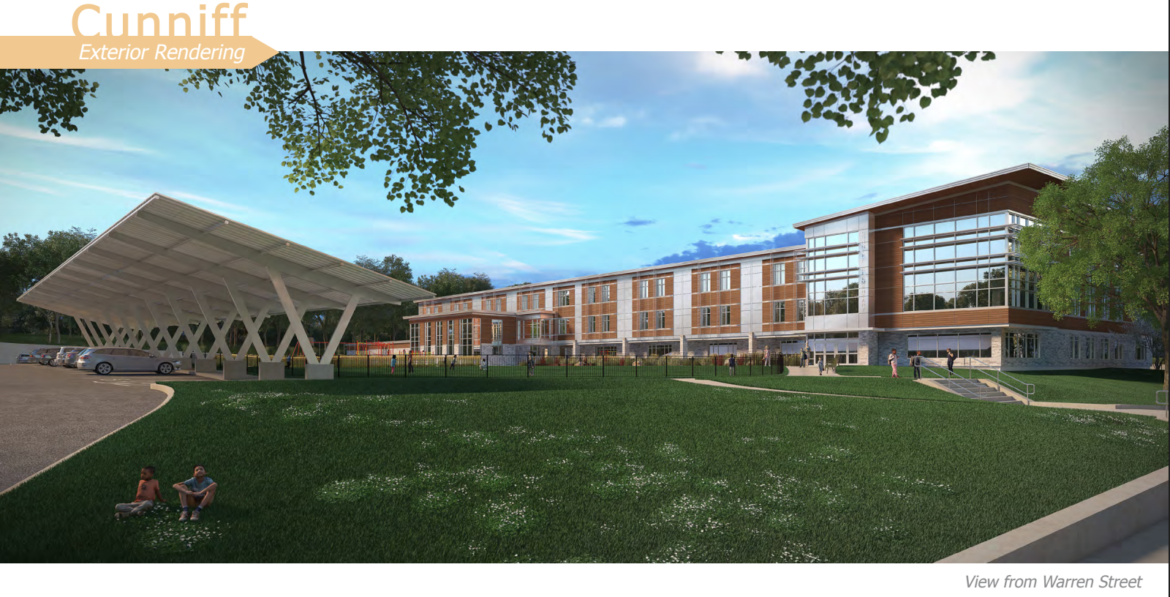 The latest rendering of the new Cunniff Elementary School, with the solar array in the parking lot.

Watertown will build two new elementary schools and, despite an estimated $1 million for additional costs of construction during the COVID-19 outbreak, the project came in under budget. The new Cunniff and Hosmer elementary schools will have enough solar panels to make them net-zero-energy buildings.

Wednesday night, the School Building Committee voted to approve the hiring of Brait Building Corp. to construct the new Cunniff and Hosmer elementary schools. The final step in the hiring will be the Town Council approving the $94.955 million construction contract. The budget includes installing a photovoltaic array at each school large enough to generate the same amount of energy that will be used in the building.

The project was designed and went out to bid before Massachusetts went into shutdown due to the Coronavirus, said Owner’s Project Manager Vivian Varbedian, from Hill International. School Building Committee members, community members and others expressed concerns over the impact COVID-19 will have on the budget, the construction schedule and how the schools will operate when they are complete.

Project Architect Scott Dunlap of Ai3 said Brait has a long and good track record of building schools going back to the late 1980s, and he first worked with them in 1999. Ai3 and Brait built Natick High School, Marsfield High School, Abington Middle/High School and Hull’s Memorial Middle School.

Dunlap said Brait has already submitted a COVID-19 safety plan for the project and that their project on Kennedy Middle School in Natick was held up as an example of a successful work site by Gov. Charlie Baker.

“They have been very aggressive in terms of implementing safety protocols related to COVID 19,” Dunlap said. “They did so not only for safety of workers and the public in general, but also to make certain the state saw the number of  precautions that contractors are taking to ensure these were safe work environments.”

Some of the items that will be needed for workers on the school projects include hand-washing stations and personal protective equipment (PPE). The cost estimates for the precautions necessary for COVID-19 ranges from $30,000 to $50,000 a month, Dunlap said. A new line item has been added to the Watertown’s project budget for COVID-19 related expenses, and Town Council President Mark Sideris said that $1 million has been budgeted.

Some worried about the schedule being delayed due to COVID-19, which could cause the cost of the project to rise. Dunlap said he has already started discussions with Brait about that, but said there are a lot of unknowns about how the virus will impact the schedule.

Teachers at Cunniff and Hosmer have already started packing up their rooms, Varbedian said, and the preparation for construction will soon begin.

The items will be moved after June 1, Varbedian said, and should be finished by mid-June. Asbestos abatement will begin at Cuniff on June 15, and after that at Hosmer. Then the old school will be razed at Cunniff, and a portion of Hosmer’s campus will be torn down.

“The contractor we selected is the same one doing demolition, so when they finish the abatement they can go right into demolition,” Varbedian said.

When the schools open — in two years at Cunniff and three years at Hosmer — some worry that social distancing may still be required. Plus, the Cunniff students will move to a temporary home known as “Cunniff West” — the former St. Jude’s School in Waltham. Some social distancing requirements will likely be needed when school opens in the fall (if the state allows them to do so).

Superintendent Dede Galdston said the Watertown Public Schools have a task force of about 45 people working on how to respond to COVID-19. They are looking not only at the needs of the temporary space, the new schools, and the existing schools, alike.

Before construction begins, the School Building Committee will hold a pair of meetings about the Hosmer and Cunniff projects. Residents will be invited to talk about traffic, parking and other issues during the projects. The meetings will be held online using Zoom, which Sideris said he had hoped to avoid, but he doesn’t see any way of doing it in person due to social distancing orders.

At the end of Wednesday’s meeting, Dunlap congratulated the School Building Committee for approving two net zero schools, which be believes will be the first two in the state.

Sideris noted that two-thirds of the Town Council still has to approve funding before the projects are officially approved. The vote is scheduled for June 9.

A resident asked if the project plans will be available for public review before the vote, and Sideris said that they will be posted on a new website being created for the elementary school projects. The website is nearly completed, and should be live by the end of May, Varbedian said.

The solar arrays will have 1,169 solar panels at the Cunniff to generate 559 KwH, and the 1,920 solar panels at Hosmer will generate 943 KwH. The amount of energy produced will be slightly below the anticipated energy use, Dunlap said, but he said solar panel technology is improving quickly.

“Since we went to bid we went from a typical panel producing 400 to 410 Watts to 425 to 435 Watts,” Dunlap said. “We do not have to commit to a particular panel until a year from now. We could get as much as a 10 percent of increase of capacity of the panels based on the evolution of the technology.”

The solar part of the project was bid separately from the rest of the project, and came in at $2.62 million; well below the budget estimate of $4.5 million. Dunlap said separate bid was done to get a true cost of the solar portion.

During discussions at prior meetings, the Committee also heard about options to have the panels owned by a power provider and lease them. Because it came in under budget, Dunlap said it is worth buying the panels because the Town will be able to reap all the benefits of owning them. The district’s energy consultant, Beacon Integrated Solutions, also recommended owning the panels, said Town Auditor Tom Tracy. Sideris said that some issues associated with the panels, such as maintenance, will have to be worked out.

One thought on “Elementary School Projects Preparing for COVID-19 Issues; Will be Highly Energy Efficient”